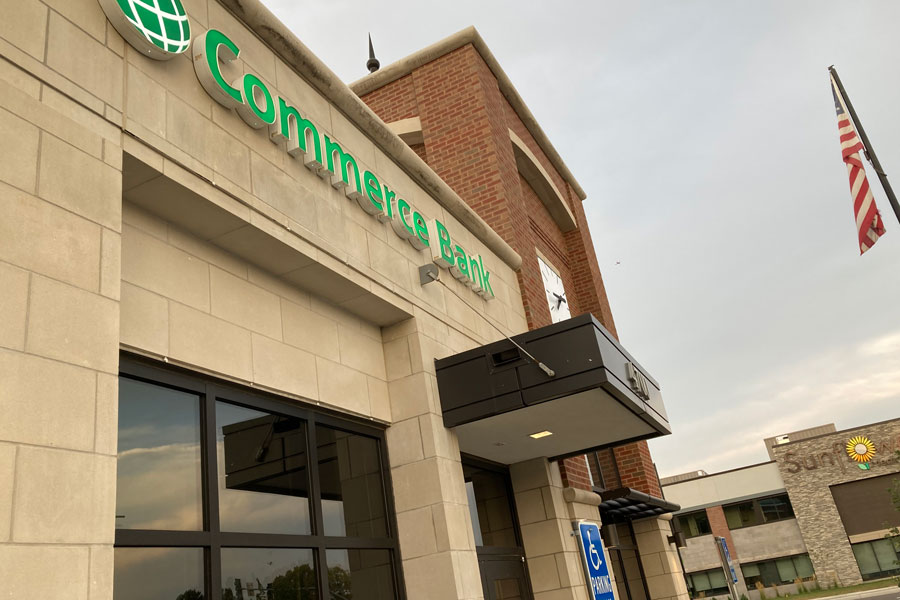 A federal jury convicted one man earlier this month for counts related to two armed bank robberies in 2018 and 2019, including at the Commerce Bank branch on Johnson Drive in Roeland Park. A second man had already pleaded guilty to counts related to an earlier robbery at a Wells Fargo bank in Leawood. Photo credit Kyle Palmer.

Two Olathe men face federal prison time for carrying out two armed bank robberies in late 2018 and early 2019, one in Leawood and the other in Roeland Park.

The other man, Kenya Breakfield, 23, had already pleaded guilty to two counts in connection with the Leawood robbery in exchange for prosecutors dropping the charges in the Roeland Park case.

Shiferaw elected to go to trial.

Each count of armed bank robbery carries a maximum of up to 25 years in prison, and the gun-related charges each carry a mandatory minimum sentence of at least 10 years.

According to court documents, Breakfield is scheduled to be sentenced on Sept. 16 at the federal courthouse in Kansas City, Kan.

There is no sentencing date that appears yet on Shiferaw’s online court docket.

Court records show that late in the afternoon on October 31, 2018, Shiferaw and Breakfield entered the Wells Fargo bank branch at 2000 W. 103rd Street in Leawood wearing masks and carrying handguns.

A teller later told investigators the men were both wearing masks that appeared to be inspired by the movie “Venom,” and one of the men yelled, “This is a robbery!”

Investigators say Shiferaw fired a shot into the ceiling. When the teller reached for an alarm button, one of the robbers — later identified as Shiferaw — approached him and pointed a gun at him.

The robbers located the vault and told one of the tellers to fill a blue duffel bag with cash. After that, one of the robbers fired another shot into the ceiling and said, “Happy holidays,” before they left.

A few months later, on the afternoon of March 27, 2019, the two men robbed the Commerce Bank branch at 4700 Johnson Drive in Roeland Park.

This time, investigators say, Breakfield stayed in the car as Shiferaw went in by himself.

Court records say that a teller told investigators she she saw a man enter the bank branch wearing a mask. The man yelled for everyone to “get down” and demanded tellers fill a black backpack with money.

Investigators say Shiferaw fired four shots while inside the Commerce Bank branch, including one aimed at a customer trying to enter the bank.

Ultimately, court records show Shiferaw and Breakfield made off with more than $120,000 from the Commerce Bank robbery.

Investigators were able to track down Shiferaw and Breakfield later on the afternoon of March 27 at an address on Lindenwood Drive in Olathe, which turned out to be Breakfield’s residence.

Investigators observed Shiferaw and Breakfield get into a vehicle that matched the description of the vehicle seen leaving the Commerce Bank branch.

The two men then drove to another Olathe address, later identified as Shiferaw’s residence, where they were taken into custody.

At the time of their arrest, investigators found the black backpack and a handgun.

On the same day, Breakfield was interviewed by investigators and admitted to robbing the Commerce Bank earlier that day. He also said he and Shiferaw had committed the Wells Fargo bank robbery in October 2018.