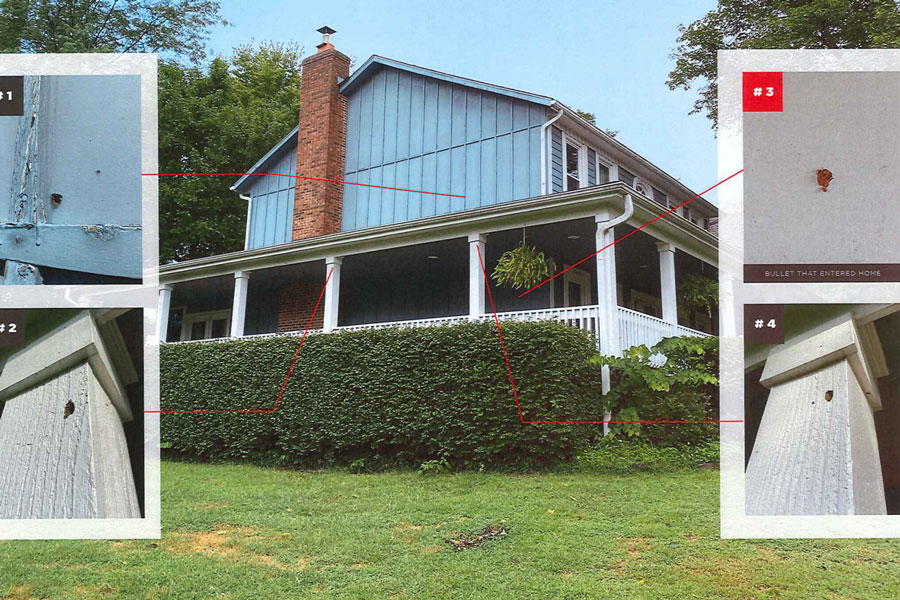 Johnson County Commissioners are set to vote on a measure that would impose up to a $1,000 fine for someone deemed to have shot recklessly onto or over another's property. The sheriff's office says they've investigated at least 22 complaints of stray bullets hitting homes and vehicles in unincorporated parts of southern Johnson County over the past two years. Above, a diagram presented by the sheriff's office to the county commission showing where four bullets entered one home, with one bullet ultimately landing in a child's play room. Image via Board of County Commissioners.

Now law enforcement, the county commission and its legal department are considering a measure that will make firing bullets onto or over property without permission a code violation that could carry a maximum $1,000 fine.

The new violation is meant to enforce safety measures that have not always been used by target shooters in the unincorporated area of the county, Sheriff Calvin Hayden told commissioners Thursday.

Over the past year, some of those stray bullets have lodged in vehicles and homes, uncomfortably close to children.

“This is not a knee jerk,” Hayden said. “We’re doing it to try and preserve the safety and well-being of our citizens.”

The sheriff’s office has been answering complaints about stray bullets for years.

Some 22 complaints were filed at 19 addresses from August of 2019 through early June of this year. In one case, a bullet hit an SUV as it traveled on U.S. Highway 169, nearly missing an 11-year-old girl.

Six months later Matt and Katie Keys of Stilwell documented an incident in which four bullets pierced the walls and a window of their house.

One of the bullets ended up in a children’s play room. Other wild bullets have been reported throughout that unincorporated area of the county.

But it’s been difficult to enforce charges of recklessness, Hayden said, because the definition is vague to the point of requiring proof that the shooter intended to be reckless.

Because of state restrictions on laws that impinge on rights of gun owners, county commissioners responded with caution when addressing the issue last September.

They adopted a resolution urging promotion of gun safety and support of changes in some state laws. Unlike municipalities, the county cannot set tougher limits on firearm use in unincorporated areas, said Chairman Ed Eilert.

But handing out brochures on, say, why a brush pile doesn’t make a good target, apparently hasn’t done much good. Hayden said incidents involving stray bullets actually got worse in the past year.

Meanwhile, lawmakers in Topeka have been reluctant to put limits on firearm use and target practice because the state relies on revenue from hunting, Hayden told commissioners.

So the sheriff’s office, the district attorney and county legal services worked out a plan to give reckless shooting some teeth by making it an actual code violation.

The new resolution would make it illegal to fire a projectile that lands outside of the shooter’s property or flies over another property, unless the shooter also owns the contiguous properties.

Exceptions would be if the shooter had permission from the other property owner, or if the gun was fired in self-defense or by a law enforcement officer in the line of duty.

The resolution would also:

The new rule would be a civil infraction, but could become criminal if there are repeated violations.

Only the shooter could be charged, but it’s possible that a single bullet could result in more than one charge if it flew over more than one property, said Peggy Trent, the county’s legal advisor.

Hunting would not be affected because there are different state laws governing it, she said.

“Nobody involved in this is anti-gun whatsoever,” Hayden said. “You guys know me, I’m a pro-Second Amendment guy. This is all about safety.”

The National Rifle Association has been supportive of this and other measures to promote safety, he said.

District Attorney Steve Howe told commissioners that figuring out who actually shot the errant bullet may prove to be the biggest challenge. But the county’s crime lab could potentially match up the gun to the bullet.

Commissioners got a first look at the proposal Thursday but will not vote until next week.

Those who spoke Thursday were supportive.

“I don’t think we should underestimate at all the danger that citizens are in when the careless use of firearms takes place,” Eilert said.