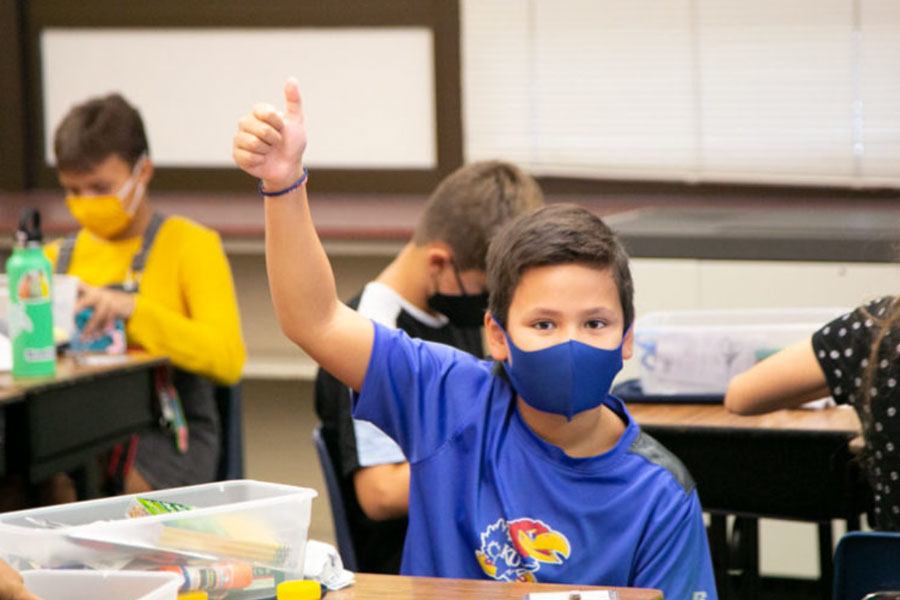 A public health order approved in August by the Board of County Commissioners requires universal masking in all schools that serve students up to and including 6th grade. A new lawsuit challenges that order on behalf of a Blue Valley middle school student who, the suit argues, has suffered negative impacts on her "emotional and mental well-being" due to the masking requirement. Above, elementary students in the Shawnee Mission School District earlier this year. File photo.

Why it matters: The lawsuit — and another one challenging a mask order in rural Morris County, about 100 miles southwest of Johnson County — are believed to be the first since the Kansas Supreme Court granted a stay last month temporarily halting a Johnson County’s judge’s ruling that a pandemic emergency powers law, SB 40, is unconstitutional.

The lawsuit comes as transmission from the contagious Delta variant remains high in Johnson County and all major public school districts here have implemented universal masking rules for all grade levels, not just elementary grades, in order to limit spread.

The details: The lawsuit filed Friday, Sept. 3, is on behalf of a middle school student in the Blue Valley School District, who is referred to in the brief by her initials M.M.C., and her parent.

The suit says the mask rule “substantially inhibits the Petitioner’s… ability to complete schoolwork, interact with her friends, and receive instruction from her teachers.”

It goes on: “Disputes over ‘proper’ wearing of face masks have resulted in conflict between school officials and M.M.C.”

The suit argues that the student is fearful of being disciplined over her mask-wearing and that her “emotional and mental well-being” have suffered as a result.

The suit takes issue with the length of the county’s order, which was enacted Aug. 9 and is set to remain in effect until May 31, 2022.

Ryan Kriegshauser with Olathe-based Kriegshauser Ney Law Group is representing the student and her parent and also filed the Morris County lawsuit, which is focused on a dispute over mask-wearing not related to schools.

Kriegshauser says Johnson County’s school mask order should be reviewed every 30 days in order to assess the most current pandemic conditions.

The lawsuit notes that previous public health orders in Johnson County that mandated mask-wearing earlier this year and last year were “substantially shorter” than the current order impacting schools.

County spokesperson Theresa Freed said the county could not comment on pending litigation.

Key quote: “Government should not be able to issue an order that lasts 295 days — no one can claim to know conditions almost a year in the future,” Kriegshauser said in an emailed statement to the Shawnee Mission Post. “This is a disingenuous attempt by the Johnson County Board of Commissioners to hide behind an essentially year-long order and thereby prevent citizens any recourse. There is no compelling rationale that such an extended order meets the legal requirement to be narrowly tailored.”

The high court is expected to hear that case and potentially rule by the end of this year, but SB 40 remains in effect for now.

Hauber has been assigned this latest mask challenge in Johnson County District Court.

Schools mask up: Though school mask rules have proven controversial with some parents, multiple districts in Kansas that began the school year with more lenient mask requirements — including Gardner-Edgerton in southern Johnson County — have since tightened their policies following outbreaks.

Meanwhile, spread of the disease driven by the Delta variant remains high in Johnson County.

Though new cases appear to have leveled off in recent days, Johnson County’s incidence rate and percent positivity remain higher now than they were in the opening weeks of last school year, when most schools were in either all-remote or hybrid learning modes.