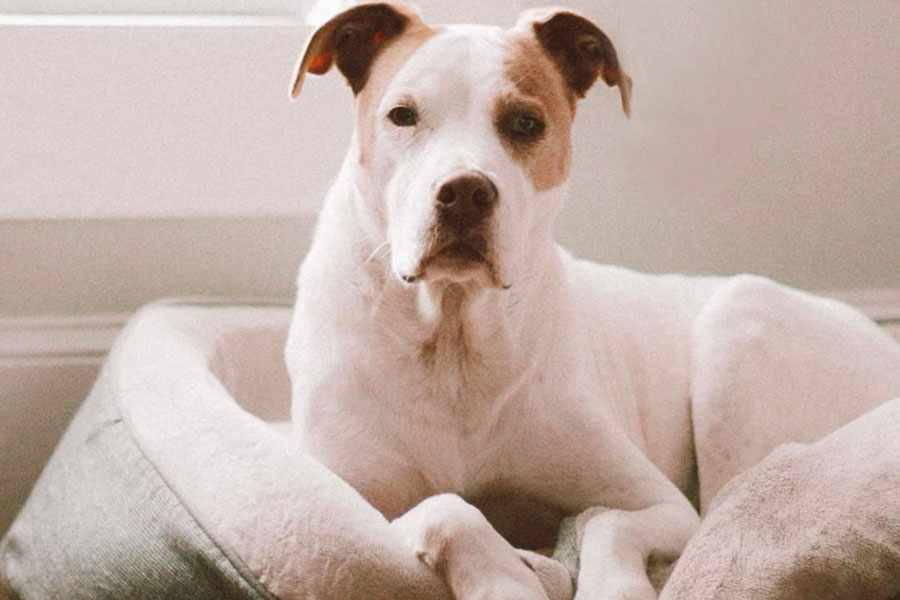 An Overland Park city council committee on Thursday approved changes to city code that, among other things, strikes language barring the ownership of specific breeds of dogs often generically classified as pit bulls. The revised code now will go to the full city council later this month. Above, a pit bull named Gunther who died earlier this year, who was owned by an Overland Park family who said they were afraid to take Gunther out in public for fear he might be taken away. Image courtesy Tori Shirah.

A long exile may finally be ending for pit bulls in Overland Park.

The dogs, which animal welfare advocates say have been unfairly maligned, could be allowed back in Overland Park homes as soon as September 28, pending final approval of changes in the city’s animal control ordinance.

The council’s Public Safety Committee took the first step Thursday by unanimously voting to end the ban that has been in effect since 2006.

If the full council gives final approval, Leawood will be the last city in the Kansas City area to prohibit a type of dog that started to become stigmatized in the 1980s and 1990s when pit bulls became associated with drug subculture.

They were banned 15 years ago in Overland Park amid a national scare over attacks and public perceptions that they are vicious.

But animal behaviorists have since said the science doesn’t back up those claims, and that a dog’s treatment has more bearing on its behavior than any particular breed type.

Critics also note that the pit bull designation is subjective and based on appearance.

The proposed animal control ordinance revisions remove a section that specifically bans that group of dogs. However, wolf mixes and hybrids and Tundra Shepherds are still included in the ban of other exotic pets that are considered dangerous.

The end of the pit bull ban was part of a package of changes the committee approved that is intended to encourage spaying, neutering and microchipping, as well as better treatment of pets.

For instance, there are new specifics on when and where a dog can be tethered outside. Tethering can’t be done between 7 a.m. and 7 p.m. and never for more than a half hour without in-person supervision.

Dogs can’t be left on a tether where there’s no protection from sun and cold, and they also can’t be tied up in an open area where they could be taunted or attacked by other animals, the proposed ordinance says.

The proposal also comes with a fee schedule that rewards spaying and microchipping pets. The fee for a license for an unsprayed, neutered or microchipped animal would be $20, but that’s reduced to $10 if the animal is fixed or chipped.

A pet that has had a microchip implanted and has been spayed or neutered could be licensed for only $5.

Committee members lauded the new ordinance for its encouragement of good pet ownership.

“I wanted to get away from breed-specific language and look more at what was causing dangerous animal behavior, specifically owner responsibility,” said Councilmember Stacie Gram, adding that the new language on tethering, “really engineered something to put dogs in the best possible care they can receive, so they’re not provoked into an attack.”

The committee sought public opinion from a hearing in June and an online survey.

Committee Chairman Paul Lyons said all the feedback was resoundingly in favor of doing away with breed bans.

“I feel good that it got the overwhelming support from the community,” he said.

The proposal will be considered by the full council Sept. 20.