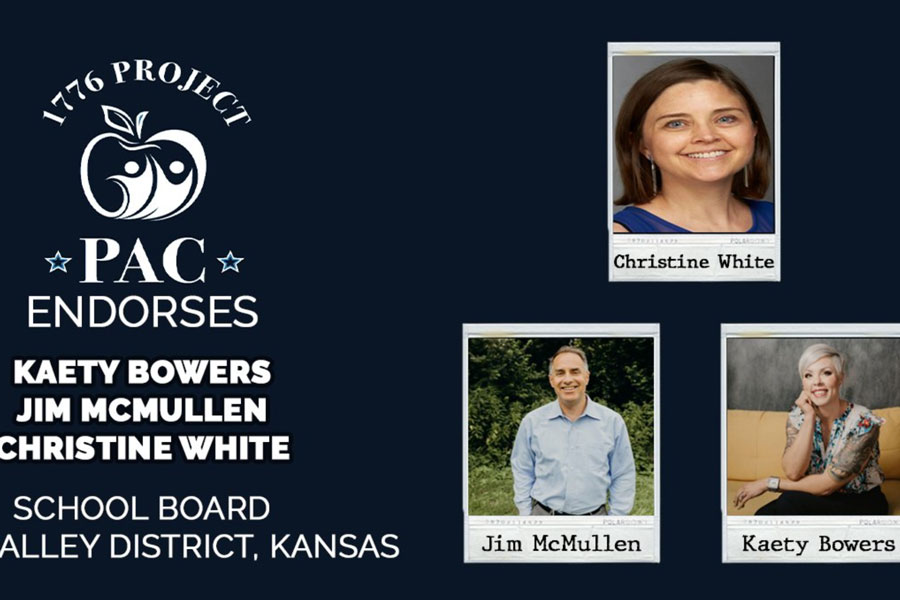 The 1776 Project PAC, a group that says it promotes "patriotism and pride in American history" in public education, has endorsed three Blue Valley school board candidates. One of those candidates, Christine White, has since announced she is withdrawing from the campaign. Above, an image from a tweet the 1776 Project PAC issued last month announcing its endorsements. Image via 1776 Project PAC Twitter account.

1776 Project PAC, a political action committee that says it is “dedicated to electing school board members nationwide who want to reform our public education system by promoting patriotism and pride in American history” has endorsed several school board candidates in Johnson County, including three in Blue Valley.

The PAC announced its endorsements last month on Twitter in school board races across the country.

They include Blue Valley candidates:

The group’s endorsements were first published on Aug. 24.

Three days later, White announced she planned to drop out of the race in order to “focus my time and energy on my family, my medical practice, and educating patients and their families about how to limit their exposure to COVID-19.”

White, a Johnson County pediatrician, had faced scrutiny over the past year for advocating for an easing of COVID-19 restrictions in public schools and pushing for mask-wearing to be optional in schools.

On its website, the 1776 Project PAC says it is “committed to abolishing critical race theory” and sets itself up in opposition to the New York Times’ 1619 Project, a Pulitzer Prize-winning set of articles originally published in 2019 that aimed to reframe American history around the “consequences of slavery and the contributions of black Americans.”

Filings with the Federal Election Commission show The 1776 Project PAC, which has a mailing address on Long Island, N.Y., raised nearly $150,000 in the second quarter of this year.

The 1776 Project says it plans on campaigning on behalf of all endorsed candidates.

On his campaign website, McMullen, an investment banker, lists the “elimination of identity-based politics” as one of his key issues for Blue Valley schools.

“The current en vogue term in public discourse is ‘critical race theory’ or ‘critical gender theory,”” McMullen’s website says. “These philosophies, and their progeny, all have one common thread. They deny individualism … and they deny the universal. I don’t seek to ban these ideas. I seek to expose them for their emptiness.”

Bowers, a licensed tattoo artist and cosmetologist, makes no mention of “critical race theory” on her campaign website but says, “I [sic] believe we should remove political pressures and unproven ideologies from the classroom and instead teach critical thinking in government and constitutional education. Our kids should be taught to enjoy learning and to learn all of history, the good and bad, without sanitization.”

Critical race theory is a 40-year-old academic theory aimed at analyzing how racial disparities have been built into social and legal systems. But over the past year, it has become a major target for conservatives and has often been used as shorthand for a broad range of education-related topics, including diversity and inclusion efforts and curriculum that teaches uncomfortable history lessons.

In July, the Kansas Association of School Boards issued a statement saying “critical race theory” is not part of the Kansas state history standards.

And the Republican-led Kansas State Board of Education issued a similar response to the “critical race theory” debate, saying in part, “Unfortunately, there are some who are conflating CRT with educational equity. These concepts and practices are not interchangeable.”

👋 Hello! I'm Juliana, and I cover city government and local schools for the Shawnee Mission Post and Blue Valley Post. The work I do every day — from going to school board meetings to staying on top of business openings and closings — is only possible because of our subscribers.

Help us keep tabs on all things Johnson County by supporting local news today. The first month is only $1 — and you can cancel anytime. 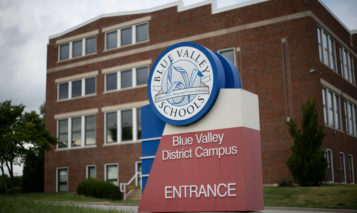