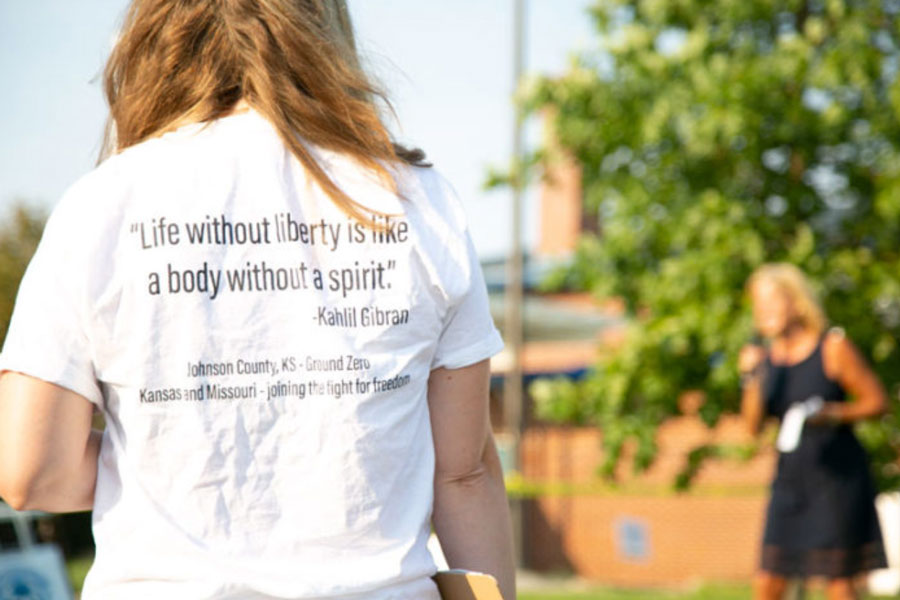 Several dozen people rallied outside Monday's Blue Valley board of education meeting, pushing for an end to the district's universal mask requirement. During public comments before the meeting, more than a dozen people spoke in support of keeping the mask rule in place. Photo credit Juliana Garcia.

Although the topic of mask rules was not on the agenda for Monday’s Blue Valley Board of Education meeting, that did little to stop the ongoing debate over the district’s requirement that everyone wear masks in all its facilities.

The discussion around the topic began even before the meeting did, as followers of the Facebook group “Mask Choice 4 Kids” held a rally outside the Blue Valley District Office one hour prior to the scheduled start to the board meeting.

The group, which has more than 5,000 followers online, invited its members to come out Monday in support the group’s mission to “give children and parents the choice to wear masks in school.”

The rally, which eventually ballooned to between 80 and 100 people, was led by Tana Goertz, a one-time contestant on the TV show “The Apprentice” who describes herself as a “business consultant” and “President Trump hype girl.”

Goertz took on the role of public spokesperson for Mask Choice 4 Kids last week after the group’s 19-year-old founder, Jacob Cleary, announced he was stepping aside from his leadership position.

It’s unclear what, if any, role Brian Cleary has with Mask Choice 4 Kids, but he posted a comment on a private Facebook group urging people to turn out for Monday’s rally outside the board of education meeting.

During the rally, Goertz discussed the groups mission, and how this group “has the guts” to stand up to the majority who is in favor of mask-wearing.

Supporters of mask rules turn out, too

While the discussion over masking began outside the district office, it continued inside during the board meeting.

All who spoke addressed the topic of masks being required throughout the district, and most were in favor of keeping it in place.

“There’s only been 144 cases this year spread out over all those school buildings,” said Greg Williams, who has a fifth grader at Prairie Star Elementary School. “That is an incredible number.”

The district’s COVID-19 dashboard shows of those 144 cases, 122 have been in students. That represents roughly .04% of Blue Valley’s total student population.

Those who spoke in favor of the masking requirement Monday said not only have masks kept the number of COVID cases down, but it is also allows children the opportunity to remain in school learning in person.

“My son has said quote, ‘I don’t care if I have to wear a mask as long as I don’t have to do school at home with you,'” another Blue Valley Parent joked during her three minute time to address the board.

She also showed her support for keeping the mask mandate in place for the district by saying they were necessary to wear for the good of the community.

Lesher argued kids need to see one another’s expressions for the good of their mental health and in order to have healthy social interactions.

Those who opposed the current mandate also said not all kids in the district “are doing okay” with wearing masks, so parents should be able to decide if it is best for their child to wear one or not.

The board made no changes to the current mandate, nor addressed the speakers beyond saying notes were taken during the open form.