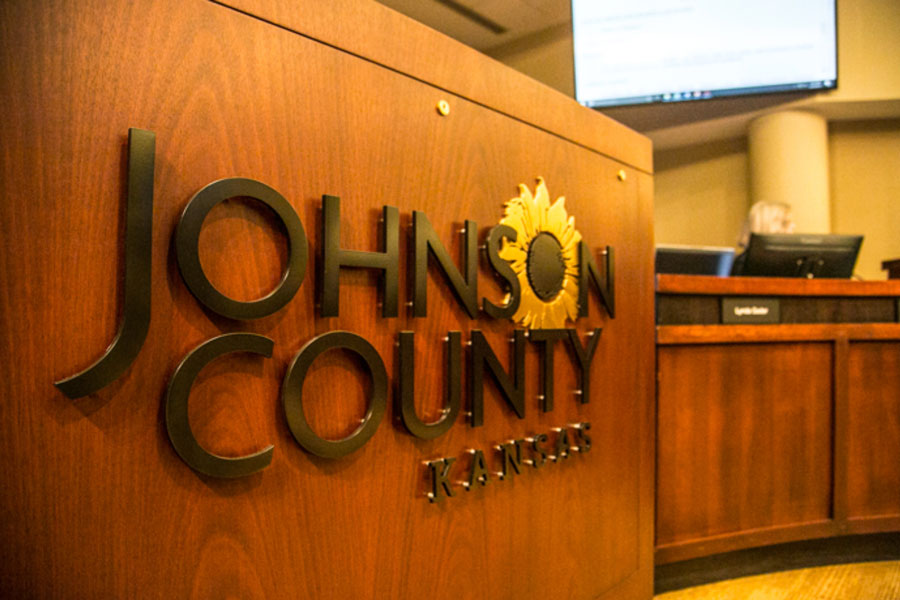 The 25-member Johnson County Charter Commission is an appointed body that reviews the county's charter, or constitution, every 10 years. A large crowd not abiding by masking or social distancing guidelines turned out for a commission hearing Monday, apparently angry over a suggestion made by a Johnson County commissioner not on the charter commission that the charter-reviewing body should consider making the sheriff an appointed office, rather than an elected one. File photo.

A public hearing for the group reviewing Johnson County’s charter was quickly adjourned Monday night minutes after roll call because the large and boisterous crowd in attendance would not wear face masks or abide by social distancing rules.

Charter Commission chair Greg Musil’s decision to end the meeting almost before it began was met with angry shouts and chants of “USA, USA!” after the vote to adjourn was taken.

He and all but about six commissioners attending in person left immediately after the live feed of the meeting on Facebook was cut. Musil described the attendees as angry and unfriendly as they left.

Many in the crowd had come to object to any plan to change the county sheriff position from an elected one to an appointed position. Even after the meeting was adjourned, some stayed on anyway to give their remarks to the remaining commissioners.

The meeting had been scheduled at the BEST Conference Center at the KU Edwards campus in Overland Park, in a room that could accommodate 24 commissioners and people who had come to speak.

As the meeting was called to order, there were fifteen people signed up to speak virtually and another 30 in person.

But Musil noted that the crowd in attendance exceeded the safety limits for coronavirus exposure. The room had a capacity of 500, and was set up with long tables for commissioners and chairs to accommodate 50 onlookers, as requested by the county, said Chris Gregory, director of public relations at KU Edwards.

However, there were at least 200 people filling the chairs and standing in the aisles as the meeting began.

Campus buildings also have signs requiring face masks be worn inside, but the only masks in view as a reporter arrived were worn under chins.

“I’m disappointed that tonight’s public hearing could not be completed by the Commission,” Musil said in an email Monday. But the rules were clearly set out in the meeting notices, he said.

The Charter Commission is a 25-member body appointed from a variety of government, business, political and community groups with the task of reviewing the county’s method of operation every ten years.

The county charter, similar to a constitution, sets which officers are elected or appointed, the size of the commission and what races will be partisan, among other things.

The Charter Commission has met many times already this year. Normally, the meetings have been an educational tour of each county department and have not drawn much public attention outside those interested in the topics at hand.

However, public interest began to pick up more in August, when members of the county commission were called to talk about their roles and give opinions on how the county should operate.

The six county commissioners and chairman were given a questionnaire by the Charter Commission asking for their thoughts on a number of things.

Among the questions was whether the Johnson County Sheriff should be appointed or elected, whether the sheriff and district attorney’s race should be partisan or nonpartisan and whether the commission should remain at seven members.

County Commissioner Janee Hanzlick responded with her interest in the idea of whether a sheriff appointed by a citizen advisory board might be a better arrangement than one who is elected.

She cited the Seattle area as a city where that has worked well. She also said making sheriff and district attorney races nonpartisan might be a way to remove more partisanship in local governing.

Charter commissioners can suggest changes, but so far none have been proposed, Musil said. Anything they agree on still has to get voter approval before it becomes final.

But even the informal comments about an appointed sheriff were enough to set off a strong reaction from some voters and supporters of Sheriff Calvin Hayden.

Comments in support of electing sheriff

The crowd that remained Monday essentially held a rally for electing the sheriff, with cheers and a couple of signs saying, “Let the People choose” and, “Elect, not appoint.”

Speakers touted Hayden as a “constitutional” sheriff who would protect citizens against perceived illegal actions like coronavirus lockdowns, mask mandates and vaccine passports.

One woman called the sheriff the people’s “most important ally in the securing of our rights. If there’s one office where we need to conserve our right it is this one.”

Another speaker blamed a population loss in the Seattle area on the appointed sheriff system and resultant “lawlessness.” And another, who had been warning that political pendulum shifts can put different groups in power called the sheriff the highest authority in the county.

One man in the audience shouted, “There will be no pendulum, people!”

Hanzlick was mentioned by name and booed more than once, though she was not in attendance. Instead, she told the Shawnee Mission Post she watched online.

“I was disappointed that some people chose to disrespect the KU campus’ mask and capacity requirements and to disrupt the meeting to the point where it had to be adjourned,” she said.

She added she has received some emails opposed to an appointed sheriff but few using strong or accusatory language.

At least one public hearing is a requirement for charter review, and this commission is planning two. The hearing adjourned Monday will have to be rescheduled, Musil said.

No date has yet been set.

“The commission does want to hear public comment,” and twenty-four members were ready to do that Monday, Musil said.

Another public hearing will be scheduled as soon as possible, he added: “We will find a way to do so that is civil and respectful and complies with the venue’s and the public’s health requirements.”