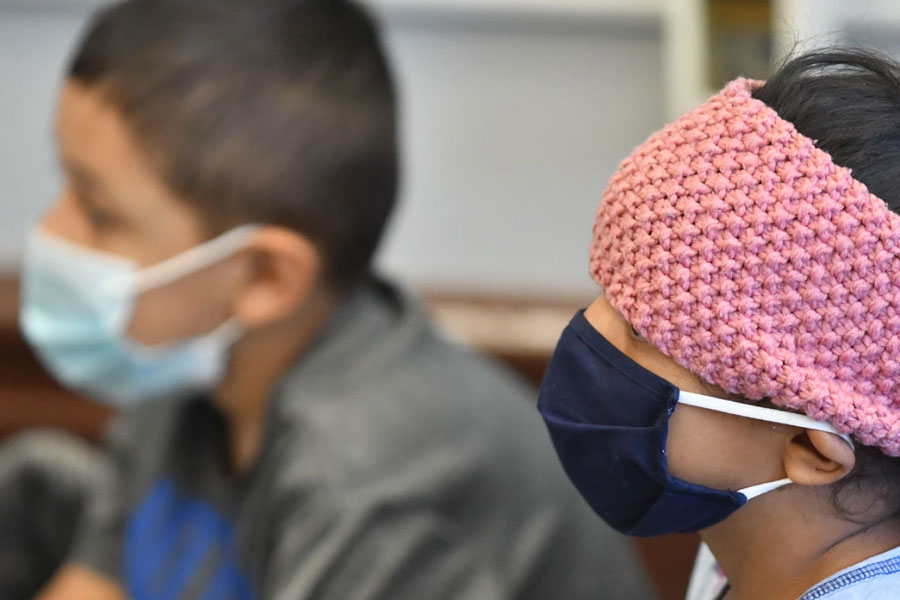 A lawyer for the plaintiffs said he dismissed the suit because the middle-school plaintiff was at risk of "vitriol, rumors, and innuendo from bad actors." At least two other legal challenges to school mask mandates in Johnson County remain pending. Photo credit Carlos Moreno/KCUR 89.3.

A Blue Valley parent and middle school student have agreed to dismiss their lawsuit challenging the Johnson County Board of Commissioners’ mask mandate in some schools, even as other legal challenges are pending.

The lawsuit, filed two weeks ago on behalf of plaintiffs identified only by their initials, alleged that the board’s order, which lasts through the end of the school year, was too long.

Ryan Kriegshauser, the lawyer who filed the suit, said he dropped it in consultation with the middle-school student’s parents.

In an email, Kriegshauser said that dismissal “is ultimately in the best interest of their minor child given the risk of being subjected to vitriol, rumors, and innuendo from bad actors for simply standing up to challenge a nearly yearlong order.”

“We brought this lawsuit to engage in a public policy discourse through litigation and were eager to have these issues heard by the Court,” he added.

But because a minor child was involved, Kriegshauser said, “we could not continue this case in good faith looking to the child’s best interests given the dangerous public environment in which we currently find ourselves.”

Without citing specific instances, Kriegshauser criticized “recent events in the press” and said “there are individuals that wish to spew vitriol and hate in the face of our reasonable position.”

The board of commissioners issued its health order in August. It mandates masks in public and private schools up to the sixth grade. The Blue Valley School District issued its own more far-reaching order last month, mandating masks at all grade levels.

Still pending is a lawsuit filed earlier this month by Laura Klingensmith and 21 families of children against the board of commissioners.

That lawsuit challenged the board of commissioners’ school mask order as an “unconstitutional exercise of governmental power.”

Klingensmith, who is vice president of sales for a health care consulting and billing firm called Healthcare Revenue Group, was also a plaintiff in a lawsuit filed in May by 16 families of other children challenging school mask mandates in the Blue Valley and Olathe school districts.

Klingensmith testified before the Kansas Senate Health Committee earlier this year that kids needed to be in school and that they shouldn’t be required to wear masks. She did not respond to messages left for her at Healthcare Revenue Group.

She is also a founder of a group called United Voices of Kansas, which is behind a petition demanding that mask and vaccination requirements for children be approved by their parents.

It recently hosted “Stop the Mandates” rallies in Wichita and Topeka with guest speakers including former Kansas Secretary of State Kris Kobach, who is now running for Kansas attorney general.