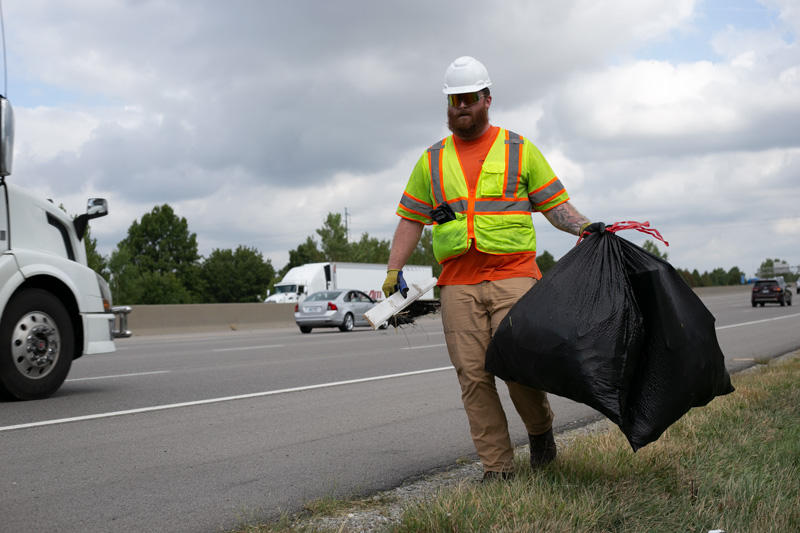 Crews with Interstate Business Solutions have been busy the past few months picking up litter along major highways in Johnson and Wyandotte counties. Above, supervisor Troy Cummings carries a load of trash to haul off site along a stretch of I-35 in Olathe. A truck speeds along just feet from him.

The Kansas Department of Transportation has hired Interstate Business Solutions to pick up “unsafe and unsightly” garbage and debris along 50 miles of roadway in Johnson and Wyandotte counties, including along I-435, U.S. 69 from I-35 to 151st Street and I-635, according to a press release. Work began in early June.

Crews have already covered all areas in the first cycle and are now in a rotational maintenance mode, going back over the same areas every two to three weeks. Delaney Tholen, public affairs manager for the Kansas Department of Transportation, said crews have discovered nearly as much garbage as the first time around.

“It seems to be just an everywhere, ongoing problem,” Tholen said. “It’s not one specific item or one specific area.”

While no injuries have been reported since litter cleanup work began in June, workers are still in a physically high-risk area. Vehicles speed along just feet from where workers pick up litter.

“Despite the warnings, we often see drivers, many using phones, who cross onto the shoulder at high speeds,” Cummings said. “They do not seem aware of workers walking on the roadside.”

Tholen said KDOT and IBS workers are “on extra watch, as they’re right along the shoulder.”

“For both IBS workers and KDOT workers, they’re very aware and extra cautious, but they also know that that’s part of the job,” she added.

About a month ago, an SUV with a family inside collided into the back of a KDOT vehicle, Tholen noted.

“No one in the truck from KDOT was injured; thankfully, the driver and passengers were all OK,” she said. “But it was a reminder that there are objects and people along the side of the road and to be cautious.”

KDOT and IBS crews ask motorists to watch out for flashing lights, progressive signs with messages that give warning several feet in advance of a project, and other temporary signage put up to alert drivers of what’s coming ahead.

“Everything out here just happens so fast,” Cummings added. “You never know.”

What crews have found

By the end of September, crews picked up more than 50 tons of litter. Each day, crews cover about eight miles of roadway and fill an average of 110 trash bags, according to KDOT.

Some items are particularly unique, including televisions, iPads, a saxophone, diaper bags, a box of straw hats, and a stolen iPhone that IBS was able to return to the owner.

What the public can do

Sec. Lindsey Douglas with the Kansas Department of Transportation, said the roads in Johnson County are “integral” to the state’s civic, social and economic development.

“KDOT receives frequent feedback from the public regarding debris on highways and the appearance of the roadside — this new litter pickup contract is making a visible difference,” Douglas said. “With KDOT, our IBS contractors, and the public working together, we can maintain metro highway corridors that make our community proud.”

KDOT offers an Adopt-A-Highway program, which allows the public to get involved by volunteering to pick up litter as well. Click here for more information.