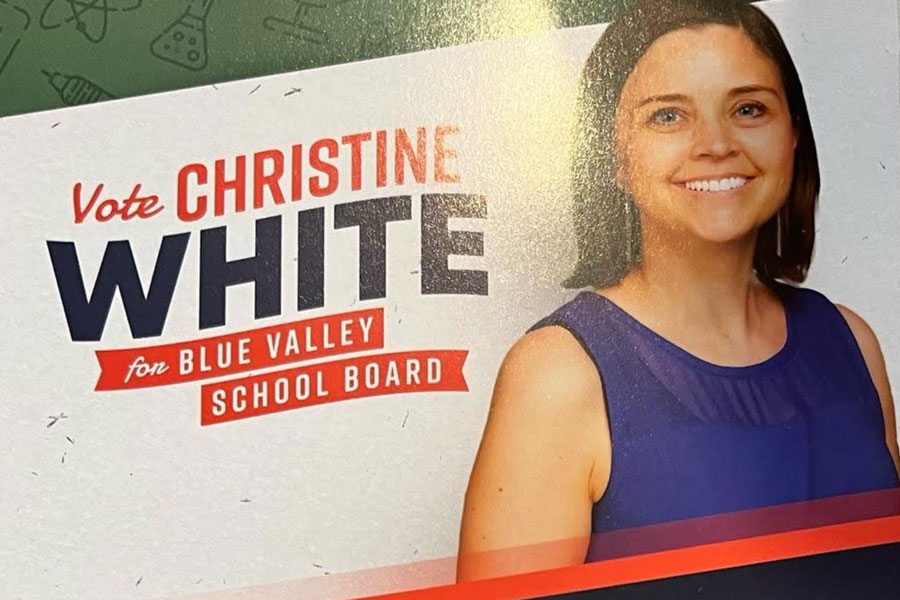 Flyers bearing the image of Johnson County pediatrician Christine White began appearing in some Blue Valley voters' mailboxes this week, despite the fact that White announced in August she would be dropping out of the race for a seat on the school board. The mailers urge voters to check White's name, which will still appear on the Nov. 2 ballot, so the school board can appoint a "like-minded person." Image courtesy Roxie Hammill.

Christine White, who bowed out of the race for a seat on the Blue Valley school board earlier this summer, says she did not authorize new campaign flyers that urge voters to cast their ballots for her anyway.

The flyers began appearing in voters’ mailboxes this week, according to multiple tips received by the Post.

The card, which bears White’s image, notes that she is no longer participating in the race but still asks voters to check her name so the next school board can appoint a “like-minded person.”

“If her Democrat endorsed opponent wins the election,” the flyer reads, “we’ll be stuck with a Radical Leftist on our School Board, who will vote her extreme national agenda into our classrooms.”

The flyer contains no information about who paid for it.

In a brief email message to the Post Thursday morning, White said she did not authorize the mailer and is not actively campaigning.

The lack of a funder’s identification on the mailer does not appear to violate any state campaign laws.

Kansas law does require political advertising to include the name of the responsible organization and its chairman or treasurer to appear at the bottom. But that law doesn’t apply to school district races, except for Wichita, according to officials at the Kansas Governmental Ethics Commission.

Districts smaller than Wichita, along with second and third class cities and other smaller elected races are not required to include that information, though campaigns for such things as bond issues do. The ethics commission has no enforcement power over smaller school board and city races.

Johnson County Election Commissioner Fred Sherman said his office is merely the custodian of elections and does not pursue investigations into questions of ethics violations. That would fall to the district attorney’s office, he said.

White’s name will still appear on the ballot, though, even though she has announced she is not running. The deadline to remove a name from the ballot was June 1, the same as the deadline for filing for office.

The flyer uses language that raises the heat in the Blue Valley races, which have already shown signs of partisanship more common in state and national races.

In addition to calling White’s opponent Gina Knapp (who is not named on the flyer) a “radical leftist,” it also says that “cancel culture bullies” forced White out of the running.

There are also reports of yard signs for White popping up around the district.

White, a Johnson County pediatrician, announced in August she would withdraw from the race after changing her position in favor of easing COVID-19 health restrictions and making mask-wearing optional in schools.

Before withdrawing, she backed away from that, saying masks were needed “without exception” in school to prevent missed classes due to quarantine.

Her withdrawal came a day after a published report that she secured a mask exemption for her teenager.

But she said this week she is not running a shadow campaign.

“I am no longer campaigning for the school board race. I have not authorized anyone to use my name and photo in campaign materials,” she wrote in her email to the Post.

It is not unheard of for voters to cast ballots for a person who has withdrawn from the race or is no longer running, but those instances are generally rare and have sometimes come under extraordinary circumstances.

One notable local example came in the 2000 race for U.S. Senate in Missouri, when then-Gov. Mel Carnahan won, despite the fact that he had died in a plane crash shortly before the election. His widow, Jean Carnahan, was appointed in his stead.

The Blue Valley school board races have also been notable this year for the entrance of a national political action committee into the campaign.

The 1776 Project PAC, which is opposed to particular teachings on race and American history that it deems “critical race theory” has endorsed three candidates in Blue Valley, including White, and one in the Shawnee Mission School District.

White’s opponent, Gina Knapp, said she was aware of the flyer and yard signs.

“I’m certainly not a radical leftist,” she said. “The thing I’m most proud of with the election is how nonpartisan we are with our campaigning.”

Most people don’t ask about critical race theory, she said, because it is not part of the K-12 curriculum.

“Most people just care about their kids coming back to school,” she said. “I think there is a fatigue with party politics.”