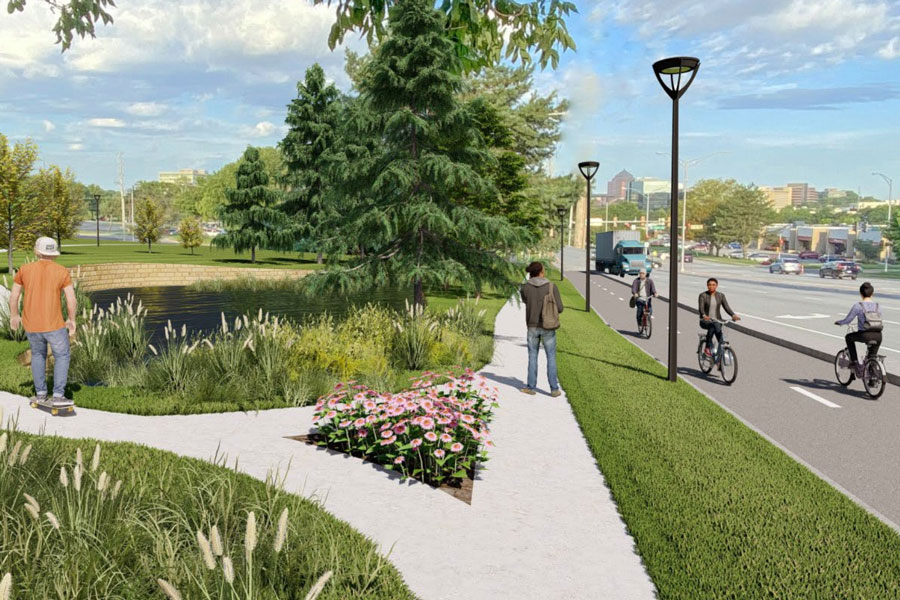 A preliminary plan presented to an Overland Park city council committee this month imagines remaking the south side of College Boulevard near the Overland Park Convention Center into a pedestrian-friendly "linear park," with public gathering spaces that could hold a playground and outdoor workspaces, among other attraction. Image via Overland Park city documents.

A linear park, pond side water features, intergenerational playground and signature pedestrian bridge are some of the ideas being considered in Overland Park’s efforts to reimagine the traffic-heavy College Boulevard area near the convention center.

The city council’s Community Development Committee got a first look this month at some of a consultant’s concepts meant to make the College corridor more walkable and inviting, particularly to convention guests.

The goal, among others, is to make the busy commercial stretch into a pedestrian-friendly “destination district,” used by convention-goers, local workers and residents alike.

A survey of corridor users showed the biggest obstacle to walkability was Metcalf Avenue to the west of the convention center, said Marty Shukert, principal at Kansas City-based RDG Planning and Design.

Other challenges mentioned: Wide streets, difficult intersections, large parking lots and traffic speed, along with a lack of entertainment or activities.

At last Wednesday’s committee meeting, Shukert presented several possibilities to remake the corridor into a better draw outside of business hours. Key to that idea was the creation of several activity areas and gathering spaces that could draw people.

To that end, a “linear park” of green space, walkways and pond features along the south side of College could link some of those areas. The park might include a protected bike path, scenic walkways and sidewalks along with some water features, Shukert said.

That idea would require cooperation of the property owners, but it might be possible to create the public amenities mostly in space that is already part of building setbacks, he said.

Councilmember Faris Farassati questioned whether property owners would push back, but noted they also might like enhanced curb appeal.

Other such gathering places along College might include space by a pond and a “convertible street” that could be closed for pedestrians for such things as food truck events, he said.

An intergenerational playground, possibly with public art could become another popular gathering area in the corridor plan, he said.

Shukert also showed some concept drawings of pedestrian bridges to help people get across Metcalf Avenue, which he called a “river of cars.”

A distinctive pedestrian bridge, like the one across the Missouri River in Omaha, or Oklahoma City’s Skydance Bridge could become a destination itself even as it solves the practical purpose of getting people across a difficult intersection, he said.

The ideas are very preliminary, and architects will continue to explore others, like outdoor workspaces, meeting rooms and vendor spaces, he said.

Residents will have a chance to find out more during an open house on Oct. 21.

City officials have been looking for ways to improve and update the College Boulevard area for about three years.

The study area spans Lowell Street to Nall Avenue, with the northern edge at Interstate 435 and the southern edge at 119th Street, including the Aspiria development on the former Sprint campus.

One of the big concerns has been the lack of things for convention and hotel guests to do in their off hours.

Fast traffic along College and a dearth of restaurants and entertainment areas has made the venue less appealing to guests, because most would have to drive to get where they want to go. Councilmembers have also worried that the situation could push convention attendees’ business into neighboring Leawood.

But appealing to convention guests is not the only reason to redo the corridor, officials say.

Getting lunch and shopping options for employees in the area is also a project goal. The corridor has increasingly become more residential, too, with the Galleria and Aspiria developments bringing in new residents.

Councilmembers are working toward consideration of a final plan in late January.