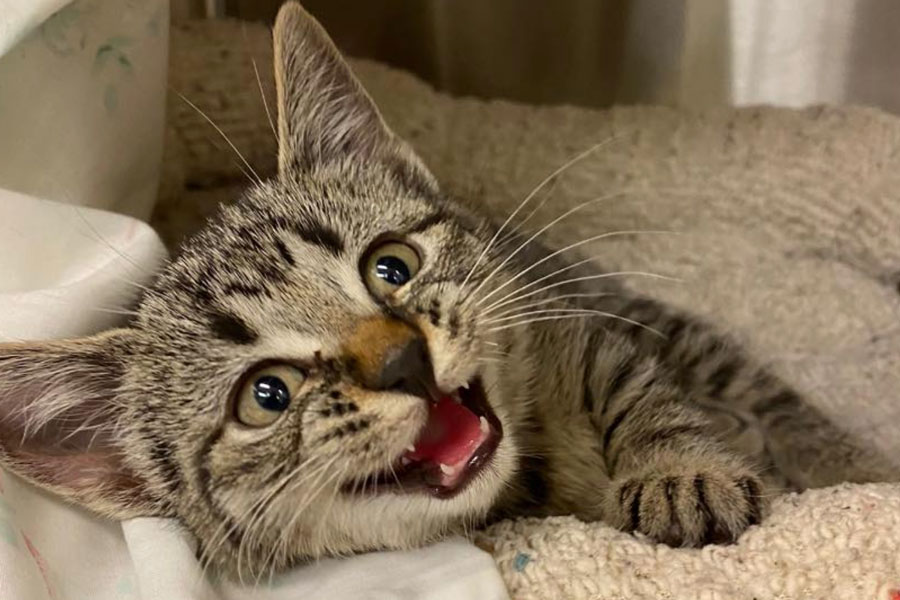 City officials say they received angry pushback from residents over a plan to switch the city's animal shelter contract from Great Plains SPCA in Merriam to an Overland Park-based animal clinic. Great Plains is a "no kill" shelter, but the proposed contract with the new clinic would have allowed for strays to be euthanized if they went unclaimed. Above, a stray cat taken in by Great Plains SPCA earlier this year. Image via Great Plains SPCA's Facebook page.

A plan to change Overland Park’s animal shelter contract from Great Plains SPCA to the Wycliff Animal Clinic got so much angry pushback from residents and feedback from some councilmembers that the city will rebid the contract and make sure to reach out to multiple animal shelters this time around.

Much of the opposition to the change revolved around residents’ concerns and questions about what could happen to stray animals the new shelter takes in on the city’s behalf.

Great Plains claims itself as the “largest no-kill animal shelter in the Kansas City metro,” while the prospective contract for Wycliff left open the possibility animals could be euthanized after going unclaimed.

Police Chief Frank Donchez told the city council’s public safety committee Wednesday that some residents who supported keeping the city’s contract with Great Plains began harassing and threatening the owner and staff of Overland Park-based Wycliff after it became known that the city planned to change the contract.

“Quite honestly this is not acceptable,” Donchez said. “It’s disappointing behavior that is not only uncalled for but is a potential criminal act. This is not how business should be done in our city.”

Donchez said afterward that the behavior he was talking about amounted mostly to “nasty emails” and harassing phone calls to, noting that there were around 40 such calls on Wednesday to Wycliff.

He said they did not appear to rise to the level of crimes and there were no plans to follow up with an investigation.

“This is a city business owner who just wants to grow his business,” he said. “At this point he just wants it to stop.”

Councilmember Paul Lyons, chair of the committee, said he’d received 286 emails on the subject, with many expressing support for Great Plains and questioning why there was only one bidder for the new contract.

“Many of (the emails) were well considered. I agreed with some of the concerns that were expressed,” Lyons said. “I think it’s unfortunate that some folks have gotten carried away with this. I think it’s unfair that Wycliff has taken the brunt of some of that criticism.”

The city has been taking strays to Great Plains, a non-profit no-kill shelter in Merriam, for several years. The contract falls under the police department’s budget.

According to a June staff report to the committee, Wycliff proposed to do the shelter work at a considerable savings to the city by not charging an administration fee. The proposal would have saved the city about $30,000 a year, had it been adopted.

The committee was set to discuss the idea on the same June night it allowed public comment on its pit bull ban. But it was pulled off that agenda to be continued in July.

The July meeting passed without a discussion on the new contract, though, and the bids were posted on the city web site Aug. 10 until their closing date, Aug. 24.

The item did not appear on the committee’s agenda again until Wednesday. Wycliff was the sole bidder, according to a staff report.

There was no public comment period scheduled for Wednesday’s meeting, but three or four people interested in the issue showed up to observe.

Terri Walker of Overland Park said Great Plains has done a good job finding owners for the strays and is committed to being a no-kill shelter.

She said she was concerned about a lack of information about the Wycliff office’s space and procedures, especially about whether the office would have enough space to house strays.

Under the contract proposed for Wycliff, strays would be held a maximum of five days. If an animal is unclaimed after that time, it would be considered the property of the shelter and could be put up for adoption, sent to a humane society or rescue or euthanized, according to the contract.

Lyons said the number of emails he received about the contract rivaled but did not quite match the number about the pit bull ban.

He attributed the concerns about the Wycliff office to a lack of understanding about how that business is run. Donchez added social media makes it easier for misinformation to spread.

Correction: An earlier version of this story incorrectly stated that Wednesday’s meeting was of the public works committee.