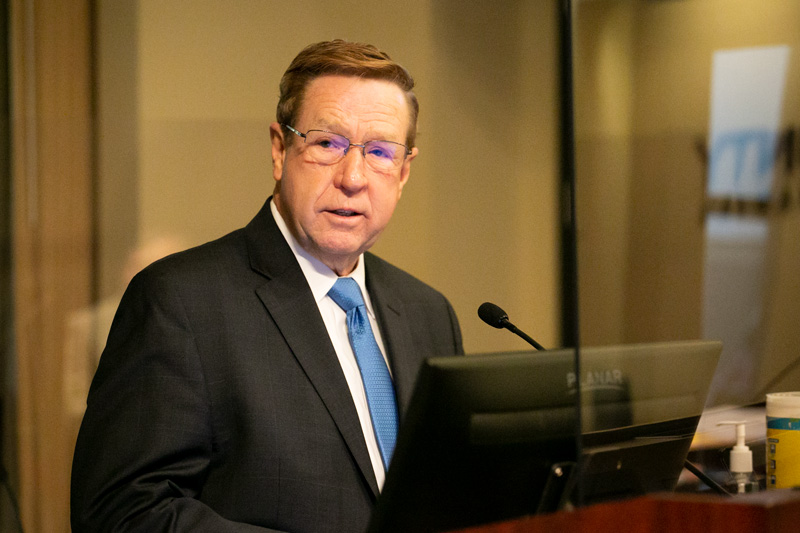 The office of Johnson County Sheriff Calvin Hayden requested an upgrade to its electronic system for tracking items in its property room in 2019, but a new county audit finds that system is not working as intended. But Hayden insisted at Thursday's county commission meeting that no evidence had been lost. File image.

An electronic program designed to keep track of items in the property room of the Johnson County Sheriff’s Office that was implemented just two years ago has not done its intended job of easing staff workload and will likely need to be replaced, a county audit has concluded.

But speaking to the county commission on Thursday, Sheriff Calvin Hayden stressed that property room staff have continued to maintain good records by hand and that no evidence or property is missing.

“There’s no structural deficiencies in our property room, never has been and never will be,” Hayden said. “We’re not missing anything. It’s there.”

Nevertheless the county will likely soon begin using a different records management system that will aim to do a better job of electronically tracking when items in the property room are moved.

‘Zero tolerance’ for items getting lost

Items in the property room include those being held as evidence in cases at the Johnson County courthouse, as well as items left by visitors to the courthouse.

Because of their importance to court cases, meticulous records must be kept whenever an item is moved from one location to another, said Hayden.

“We can’t take any chances with the property room. Zero tolerance,” he said. “If one case gets lost or something goes on, it destroys the credibility of the entire property room.”

In 2019, the sheriff’s office asked for an upgrade to its existing property room inventory program.

The goal was to create a bar code system that would allow officers to scan an item in at a new location without hand-filling and signing forms. The system then would, ideally, be able to print out hard copy reports, allowing the office to trace where the item had been and when it had been moved.

For years, sheriff officials have relied on officers manually entering and signing for items as they traveled to and from the courthouse and crime lab, Hayden said.

But the county’s audit showed that the new bar coding system only partially worked as intended.

The bar codes were created and they did identify the contents of closed packages, but sheriff’s office workers still had to enter by hand the information on locations.

Mostly, the change was meant to make things more efficient, Hayden said. He suggested that a computer tracking system might protect against some human error.

For instance, he said it was learned as the old courthouse was demolished that some county judges had created their own holding room for property when court cases are continued, and “that isn’t good.”

An electronic property-tracking program written for the sheriff’s office a decade ago met the needs then and no changes were requested over the years, said Dylan Gentry, of the county Justice Information Management System.

Commissioner Michael Ashcraft asked why it took so long for anyone to take action on the problems.

“COVID,” Hayden said, holding up his face mask to commissioners. “We didn’t audit last year because my officers were out in the field instead of sitting behind a computer at home. That’s what happened.”

The changes requested in 2019 also came at a bad time because county IT staffers were busy with a new Kansas court record system while exploring a new law enforcement records management system called Niche, Gentry said.

So programmers constructed a stop-gap solution to enhance the bar codes and buy time while Niche and other products were being vetted.

The Niche system – already in use in other parts of the county – should be able to fix the remaining problems, Gentry said.