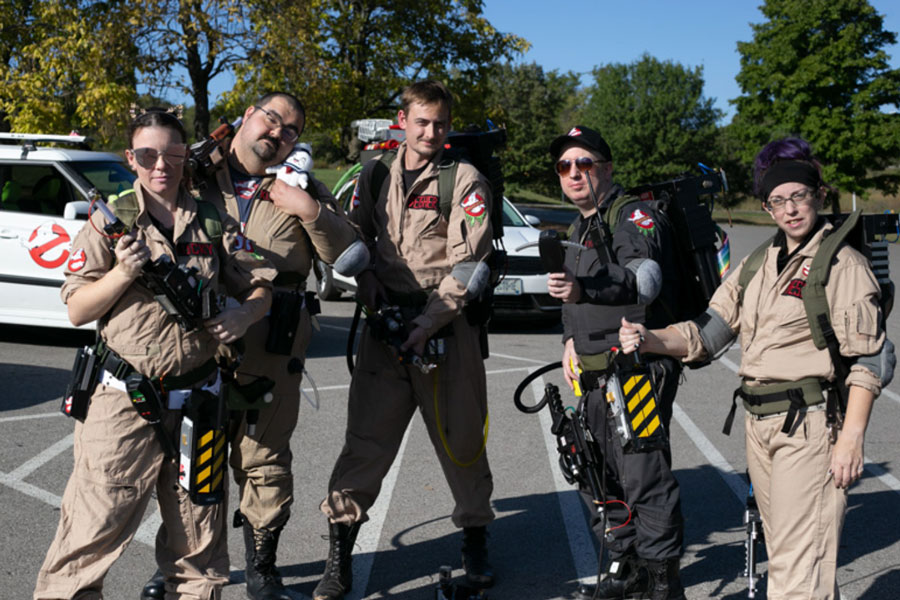 Midland Empire Ghostbusters is available for paranormal investigations and eliminations. But group members also have a busy month making several appearances at local charitable events. Read on to see where you can find them next. From left, Bex Lucky, Joe Kline, Dustin Deisher and Nick Ryan, all of Shawnee, and Tiffany Messer of Kansas City, Missouri. Photo credit Leah Wankum

Who you gonna call?

With the Halloween season upon us, Johnson Countians may have noticed the Ghostbusters making the rounds, including some cars that resemble the instantly recognizable Ectomobile.

Inspired by famed movies, dozens of local cosplayers have found themselves to be very busy this month.

They volunteer for Midland Empire Ghostbusters, a nonprofit based in the Kansas City and St. Joseph, Mo., area.

Group members in full Ghostbuster regalia, including proton packs,  appear as an attraction for events, kids’ parties, fundraisers and more. Before the busy Halloween season began, they turned up at Planet Comicon KC this past summer.

“We’re getting more and more known, so we’re getting a lot of invitations to do things,” said Nick Ryan, one of the founding members who lives in Shawnee. “Now we’re busy. October is always busy. We’ve grown a lot over the years, and we’re looking forward to doing many more years to come.”

‘The smiles you get from kids …’

Midland Empire Ghostbusters was established in January 2018 by Ryan as well as Neal and Crystal Hontz of Wathena, Kan., Dustin Deisher of Shawnee and Rickie Lee Clevenger of Kansas City, Kan.

Since then, it’s grown from cosplaying to more impactful charity work. And the group has increased from a handful of Ghostbusters lovers to about 50 volunteer members, including dozens who dress up in Ghostbusters attire.

“We kind of just always liked Ghostbusters, all of us, and that’s what brought us together as friendships,” Deisher said. “Really, I do it for the love of just the franchise and the reaction I get from other fans and kids. The smiles you get from kids just makes my day.”

In fact, children’s charities have been the particular focus for the group as of late.

The nonprofit was practically shuttered last year with all of the event cancellations in 2020 due to the pandemic, but things have picked back up again with vaccinations and the lifting of local restrictions.

Charitable events allow folks to have photo opportunities and spooky children’s activities themed around the movie franchise, the group says. Many events are outdoors or indoors with volunteers masked up.

For Joe Kline, a Shawnee volunteer, it’s all about the kids and passing on the love of the movies he had from his youth.

“I liked Ghostbusters from a young age; the second one was the first movie I ever saw in a theater,” Kline said. “But I think what really makes it special is just the looks on people’s faces, because it makes people so excited when they see anything Ghostbusters.

“Even when I’m driving in my car without the stuff, people just get so happy to see the car roll up. And I think that’s really what makes it worth it.”

Meanwhile, some members have taken the Ghostbusters work a step further, doing actual paranormal investigations in the area. Ryan said they may pick that up again someday soon.

Midland Empire Ghostbusters plans to partner with B&B Theatres around the metro, including in Johnson County, to make appearances at about five local premieres.

To enquire about booking the Ghostbusters for your upcoming event or Halloween-themed party, go to the group’s website here. 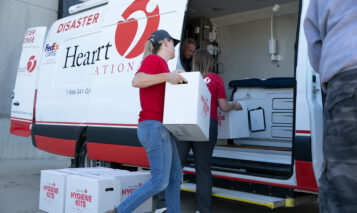 Heart to Heart in Lenexa sends crews, supplies to Florida following Hurricane Ian — How you can help 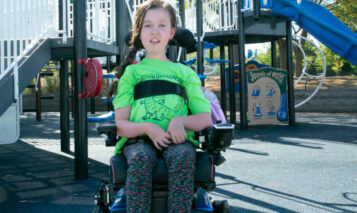