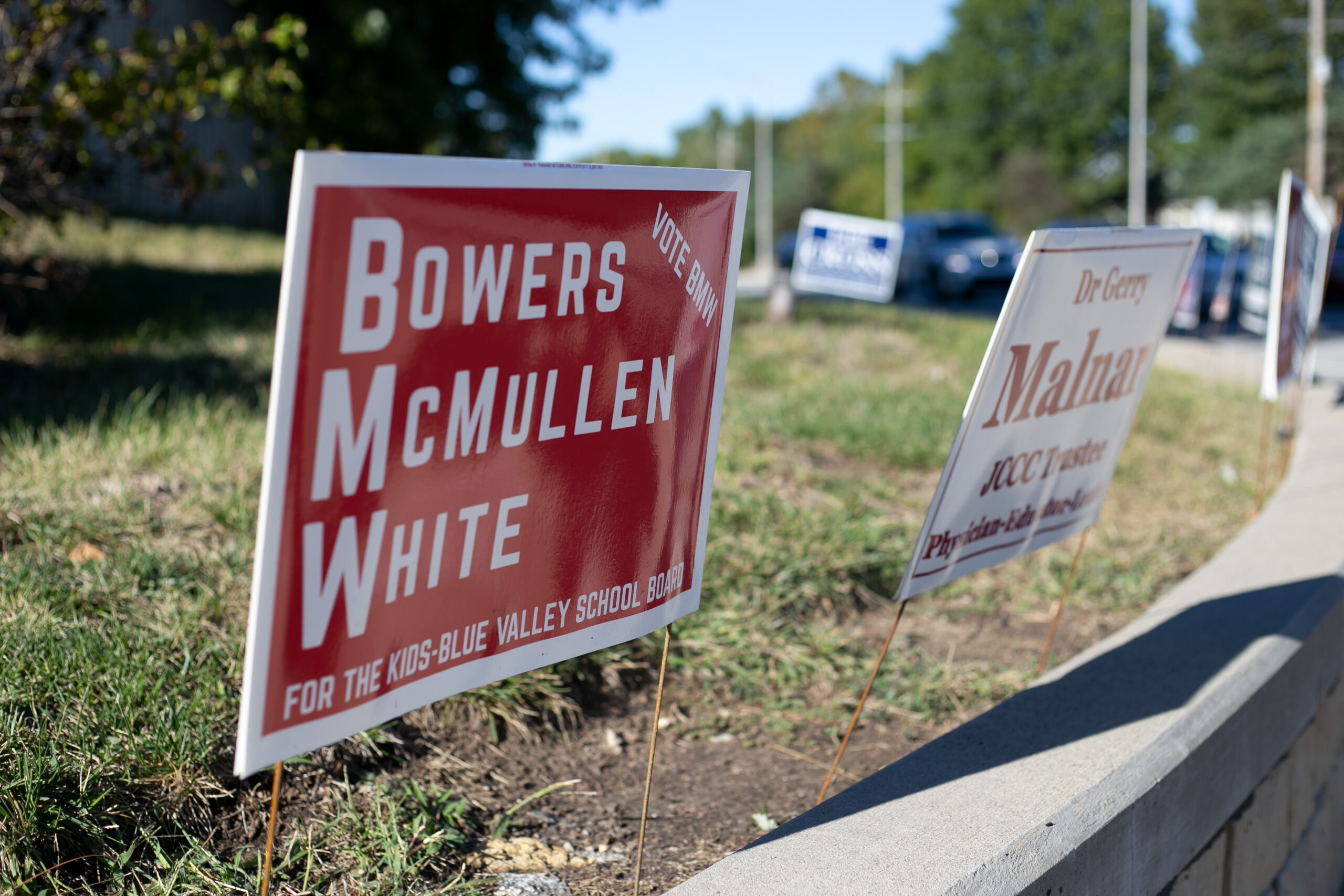 Three candidates running for school board in the Blue Valley School District have appeared together on door hangers and campaign signs. In a letter to some voters, the candidates — Kaety Bowers, Jim McMullen and Christine White — have said they're running together as "conservative Republicans" for the normally nonpartisan school board seats. Last month, White announced she was not actively campaigning. Photo credit Leah Wankum.

Party politics, usually under the radar in local non-partisan elections, is coming out into the open this year as school board candidates in Johnson County make their final push for votes in the Nov. 2 election.

As the final weeks count down, school board races that have in the past been tame affairs are increasingly lit up by hot-button national issues, like schools’ response to COVID-19 and efforts at to address race and diversity.

Pushing these typically staid local contests to unusual levels of partisanship are outside special interest groups and shadowy funders.

The candidates themselves say they are generally not trying to run as Republicans or Democrats, but several recent examples show just how politicized these  nonpartisan races have become.

The campaign against “critical race theory” has driven heated school board contests around the U.S.

Critical race theory is an academic study that examines how racism is interwoven into society. It is usually taught at college level, and the Kansas state school board says it is not taught in public schools. But so-called “critical race theory” has become a talking point among right wing politicians and media hosts and has been welcomed as a campaign issue among certain Republicans.

One political action group, in particular, is making it their central plank in supporting candidates for school board across the country this year.

The 1776 Project PAC, based in Shirley, N.Y., was formed in April with opposition to “critical race theory” at its heart.

According to Federal Election Commission reports, the group had raised $437,800 in the last quarter ending in Septembrer and spent roughly $297,000 for things like marketing, postage and delivery.

Two of the group’s individual donors listed on the FEC filings are from Kansas — outside of Johnson County, from Auburn and Chanute — and gave the group a combined $1,525.

On its website, the 1776 Project PAC says it is “committed to abolishing critical race theory” and sets itself up in opposition to the New York Times’ 1619 Project, a Pulitzer Prize-winning series of articles that aimed to “reframe the country’s history by placing the consequences of slavery and the contributions of black Americans at the very center of our national narrative.”

The 1776 Project PAC’s involvement in local school board races got heated pushback from Stand Up Blue Valley, a public education advocacy group, which wrote on its Facebook page last month, “Despite what this New York-based PAC wants you to believe, Critical Race Theory (CRT) is NOT being taught in Blue Valley Schools.”

“NO East-Coast PAC should have ANY say in our kids’ education and we know our members will agree,” Stand Up Blue Valley’s message continued. “So it’s our job to Get Out The Vote and send a clear message to outside special interests eyeing our School Board races: “You are not welcome here and the Blue Valley School Board is NOT for sale.”

The 1776 Project PAC has endorsed the three Blue Valley candidates plus Brian Neilson, who is running against Heather Ousley for a spot on the Shawnee Mission school board.

Candidates varied on how much of an effect the endorsement is having on their races.

Ousley said people who bring it up are usually more accusatory than inquiring. The incumbent school board member and current board president said the district has worked hard to be more welcoming and inclusive in its policies.

Neilson, her opponent, said he would have to investigate the details of the PAC.

“I don’t know what they are all about. They endorsed me without talking to me,” he told the Post. “I’ve been told campaigners and PACs should stay as far away as possible and I’m taking that advice.”

McMullen in Blue Valley said he doesn’t get asked often about what party he’s from, but acknowledges Republicans would generally agree more with his views.

People do ask about the district’s curriculum regarding issues of race and diversity, and McMullen said he takes a more nuanced approach in looking at board policies that might fall under that description.

Andrew Van Der Laan, another candidate in Blue Valley not endorsed by the 1776 Project PAC, said he hasn’t heard many questions about partisanship from voters but noticed a lot from groups and social media.

Bowers, his opponent, didn’t respond to a request for comment on the PAC but did say in an earlier interview that “honesty and integrity are important at all levels.”

Lindsay Weiss, running against McMullen, did not respond a request for comment for this story.

Running as a ‘slate’

Meanwhile, the three Blue Valley school board candidates endorsed by the 1776 Project PAC are also doing something unusual: running together, though one of them has announced she is dropping out of the race.

Christine White, a Johnson County pediatrician who had advocated for the easing of local COVID-19 restrictions and mask rules in schools, was one of three candidates, along with Bowers and McMullen, who have appeared together on door hangers in the district.

In an explanatory letter that accompanied the door hangers sent to some homes, the candidates pitch for voters’ support. The letter explains that the three did not know each other before the campaign, but decided to run as a “slate.”

“We would like to have three of (the seats) filled by us – conservative Republicans,” the letter said. “We will then have a much better chance to make the needed changes in our district.”

The candidates want to make sure students get an education without “unwanted ideologies being forced on them,” the letter continued.

One example they gave was “critical race theory,” which the candidates say they would like removed from being taught either “officially or unofficially.”

The letter also says the district should “get back to basics and teach reading using phonics, not with sight words.” It also says the candidates want to “improve academic excellence” and lower class sizes.

The letter cites the district’s diversity, equity and inclusion as the umbrella under which critical race theory exists. In particular, it mentioned the district’s strategic priorities and professional development.

Like many districts in recent years, Blue Valley has been accelerating its efforts at diversity, equity and inclusion.

A district-wide committee made up of staff, students and community members has recommended a number of things, including the hiring a district diversity leader, establishing a system for reporting and responding to incidents and establishing diversity and inclusion groups at every school.

McMullen said in an email the flyer was created in June or July with three candidates, then redone with just himself and Bowers when White pulled out.

Candidates addressed their thoughts on diversity, equity and inclusion during a recent candidate forum hosted by the Post. That discussion begins at around the 24:40 mark of the video below.

In addition, more flyers circulating for White are adding to the races’ politicization.

The origin of the mailers and who is paying for them remain a mystery.

White told the Post recently that she didn’t authorize them, but they’ve made the rounds in doors and mailboxes, along with campaign yard signs bearing White’s name that continue to crop up in the Blue Valley area.

The mailers’ text brings up the heat on the local culture war, with phrases like “cancel culture bullies” and “radical leftist.” But there’s no mention at the bottom as to who paid for it.

Campaigns for city council races in larger cities must claim ownership with names of the chair and responsible organization at the bottom of literature. That’s also true of all the bigger state and county races and even those that call for ballot questions.

The Wichita school district is the only district in the state considered large enough for its school board races to merit reporting requirements, according to state ethics laws.

But even school board campaigns in districts as large as Johnson County’s don’t have that requirement.

Such districts have different filing deadlines for financial disclosures as well. For them, reports on who donated to school board candidates fall a month after the election.

In Johnson County, candidates who did not have a primary opponent did not have to file a September financial report, meaning it will be December before the public learns who their donors were.

Even then, any potential ethics violations would be referred to local law enforcement rather than the state ethics commission.