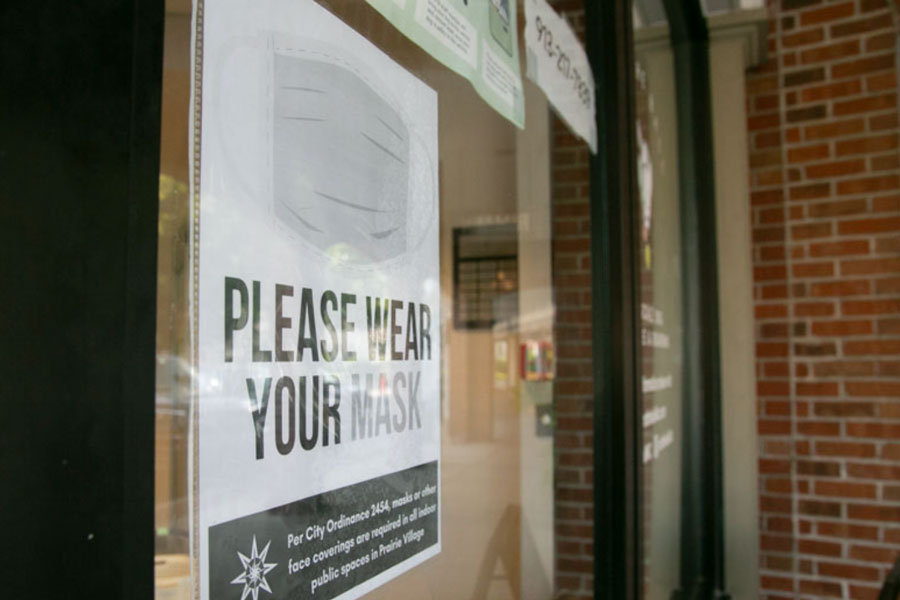 The Prairie Village City Council took no action on its citywide mask mandate, meaning the order will expire on Oct. 31. At Monday's meeting, multiple business owners urged the council to let the order expire, arguing the mandate had driven customers to other nearby cities. Above, a city-issued mask mandate sign. File photo.

The Prairie Village City Council on Monday evening elected to not take any action on its citywide mask mandate, allowing the current order to expire on Oct. 31.

Prairie Village’s mask order — which was the first for a Johnson County city amid this summer’s spike in cases — went into effect on Aug. 24.

The city council then extended the mandate through the end of October, largely based on the CDC’s classification of Johnson County as an area of “high” transmission of COVID-19 at that time.

Mayor Eric Mikkelson pointed out Monday that the Johnson County Department of Health and Environment now deems the county an area of “substantial” submission, with JCDHE reporting 91 COVID-19 cases per 100,000 residents.

A lower category of transmission is one of the criteria Mikkelson said he was looking for to determine the future of the city’s mandate, and he said he supported letting the order expire on Oct. 31.

“I’m glad we did the mask mandate when we did,” Mikkelson said. “It was the right thing to do during this Delta variant surge. It comes at a price, we heard part of that price tonight from the owners of Rimann Liquors and Dolce Bakery — two of our finest businesses speaking on behalf of other businesses.”

‘Let’s bring those customers back’

Mary Rimann and Erin Brown, owners of Rimann Liquors and Dolce Bakery, respectively, asked the city council to consider the impacts the mask mandate is having on businesses when making a decision.

Two weeks ago, Rimann and Brown sent the city council feedback on its mask mandate from a survey the pair conducted of Prairie Village businesses.

The results, from 20 businesses, showed more than half thought Prairie Village was suffering as a result of the mandate and that the order shouldn’t be extended, Brown said.

Brown said one unnamed business had “four employees walk out the day the mask mandate” was passed. Since then, Brown said the business has had difficulty replacing those employees.

Rimann said businesses want to continue to ask customers to wear masks but also want to be able to offer them a choice.

“We are currently forcing a lot of our customers to simply shop elsewhere,” Rimann said. “Let’s bring those customers back to Prairie Village and allow them to shop where they live.”

Some city councilmembers shared their uncertainty about how to move forward with the mask mandate.

JCDHE told city staff it would “fully support” a mask mandate extension in Prairie Village, and Poling said he puts “a lot of weight into expertise.”

Others, like Councilmember Bonnie Limbird, were less conflicted. Limbird said she thinks it’s too soon to let up on the mask mandate because the history with COVID-19 shows it could lead to an increase.

Councilmember Ian Graves expressed support for aligning with the mask mandate expiration dates of the city’s neighbors to the east: Jackson County and Kansas City, Mo.

Graves made a motion to extend the city’s mask mandate to Nov. 7, in line with those two jurisdictions’ mask orders, but the motion failed in a 7-5 vote.

Poling said his opposition “reflects uncertainty about” the Jackson County and Kansas City expiration dates and whether or not that would lead to a gap between Prairie Village’s mandate and another metro city’s mandate.

Still, Poling said a mask mandate isn’t off the table for the future.

“I hope everyone on the governing body will be ready to move forward to protect public health if things change — if things don’t keep going in this positive direction,” Poling said.