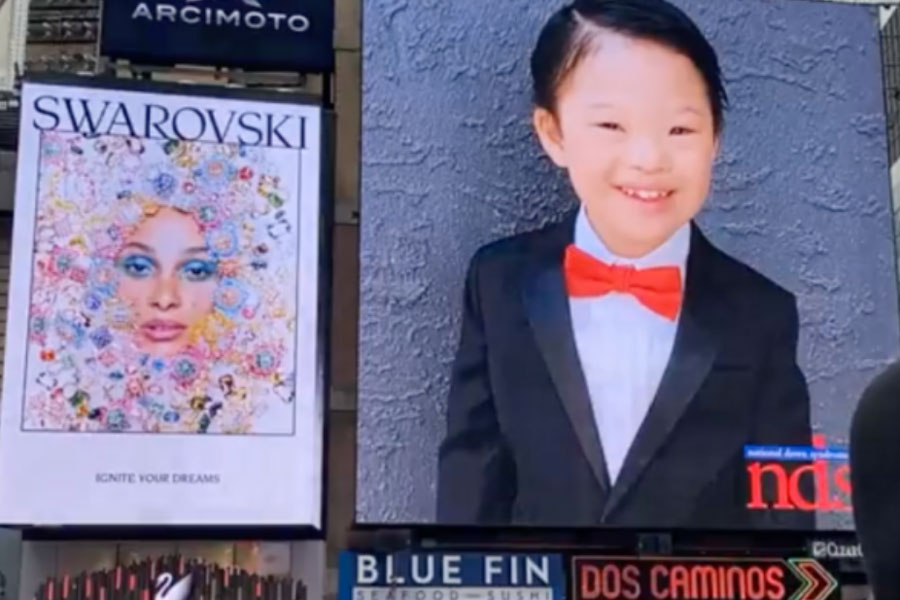 Blue Valley Lakewood Elementary student Wil Aeillo was featured at the National Down Syndrome Society Time Square Video presentation last month. He also had his own team, "Wil's Warriors" at the local Step Up for Down Syndrome walk last weekend at Arrowhead Stadium. Image via Kim Aeillo.

When Kim Aeillo learned her nine-year-old son Wil’s photo had been selected for the annual National Down Syndrome Society Video Presentation at New York City’s Times Square, she was shocked and overjoyed.

“They had over 2,000 photos to choose from and then they choose 500 to feature,” Aeillo said. “So it’s a pretty big deal that his photo was selected out of that larger group of applications that came through.”

The annual one-hour video presentation in one of America’s busiest public spaces kicks off the annual National Buddy Walk, which has been based in New York City since 1995, and is the National Down Syndrome Society’s main fundraiser.

The walk is an event aimed at raising awareness and advocating for people with Down syndrome as a way to promote acceptance and inclusion.

The video shown on Times Square’s big screen features children, teens and adults with Down syndrome from all 50 states.

Typically, Aeillo said, many of those featured in the video come to New York with their family to watch it live in person. However, due to the COVID-19 pandemic, the event this year occurred virtually.

Aeillo says her family still made the best out of the situation tuning in bright and early on the morning of Sept. 18 to watch a livestream of the video.

“I’m hoping maybe in time we’ll be able to actually go or support another family or friends that are selected,” Aeillo said.

Step Up for Down Syndrome

Wil was featured in more than just the national event this year, he also had his own team at the Step Up for Down Syndrome Walk for the greater Kansas City area last Saturday at Arrowhead Stadium.

His team, known as “Wil’s Warriors” raised almost $300 for Down Syndrome Innovations, which serves over 1,500 families, 22 hospitals, 45 school districts and dozens of early childhood and adult service providers in Kansas and Missouri.

Amy Allison, vice president of education and advocacy for Down Syndrome Innovations, said events like the annual walk are important to her organization because they help provide the necessary funding to support Kansas City’s Down syndrome community.

For Aeillo, she said, the most amazing part of this event was seeing her community rally behind her son.

“The Lakewood community have just been amazing to us, so it was great to see them come out in support,” Aeillo said.

The community support and awareness is what Aeillo says is most important when it comes to the Down syndrome community.

October is Down Syndrome Awareness Month, which began in the 1980s and has been recognized every year since.

The month is a time to celebrate people with Down syndrome and make others aware of their abilities and accomplishments.

“I think it’s important to really just continue to make people aware that [those with Down syndrome] can be an active members in our community, and have jobs, and have a family of their own or live independently,” Aeillo said.

Aeillo said her goal for the future is to have people see her son, and others in the Down syndrome community, for who they are outside of their disability.

For Wil, she says, he is a happy, charming and accomplished young boy.