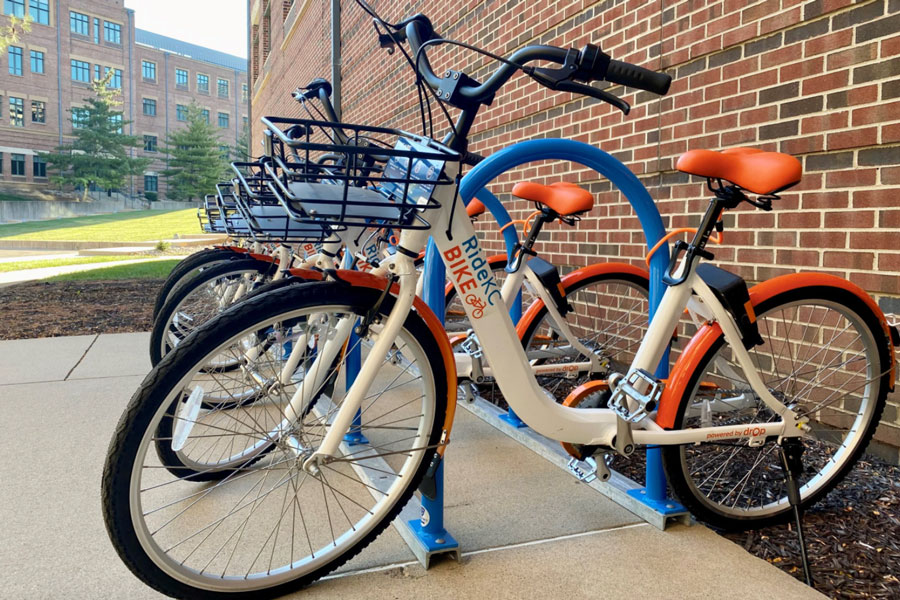 RideKC bike share program is now available at Aspiria, located at the former Sprint campus site. The program os the largest venture for RideKC in the region. Employees of Aspiria will have special access to these shared bikes with 80 minutes of free riding per day. Image via Occidental Management.

Members of the community will now be able to get around the developing Aspiria grounds on two wheels after RideKC announced implementation of a new bike share program on the site of the former Sprint headquarters.

Located near 117th Street and Nall Avenue, construction on the first of at least three planned phases for the project began back in early July, with the entire project set to be completed over a 7- to 10-year time span, according to developers.

The new bike share program at Aspiria will include the installation of seven rental/drop-off stations around the current 200-acre campus.

The bikes are not just limited to employees who work on the Aspiria grounds. Anyone in the Overland Park area can use the bikes by downloading the RideKC Bike app and creating an account.

But employees of the tenant businesses at Aspiria will have special access to the shared bikes, with 80 minutes of free riding per day on the campus as well as anywhere that RideKC bikes are available in the Kansas City area.

The addition of the bike share program is another way the Aspiria project is trying to differentiate itself for current and future tenants, Hunter Johnson, senior vice president of sales and leasing at Aspiria, said.

“Partnering with RideKC goes hand-in-hand with our holistic approach at Aspiria to help our tenants attract and maintain a talented workforce,” Johnson said in a release.

Existing tenants at Aspiria will have immediate access to the new bikes, some of which are electric.

RideKC operates ride share bikes throughout downtown Kansas City, as well as at select locations around the metro.

“We are excited to make Aspiria our first major corporate campus in the Overland Park community,” RideKC bike director of bike share Eric Vaughan said. “It will also be the largest bike share program in the Greater Kansas City region.”

In addition to adding the RideKC Bike program to the Aspiria campus, the commercial real estate provider is donating all its current bike racks to the nonprofit BikeWalkKC, the parent organization of RideKC Bike.

The nonprofit says it will use the donated bike rack from the former Sprint campus in its Safe Routes to School program, which provides biking infrastructure to area schools in need.

“Many of the schools we work with do not have adequate bike parking for their students. Aspiria’s bike rack donation to schools in need will help make riding to school an easy and safe choice for students,” Amy Scrivner, BikeWalkKC director of development and communications, said.

Anyone can sign up to use bikes at Aspiria or anywhere in the Kansas City metro. Download the RideKC Bike app to get started.

To learn more and explore the bike locations at Aspiria, check out the campus interactive map.