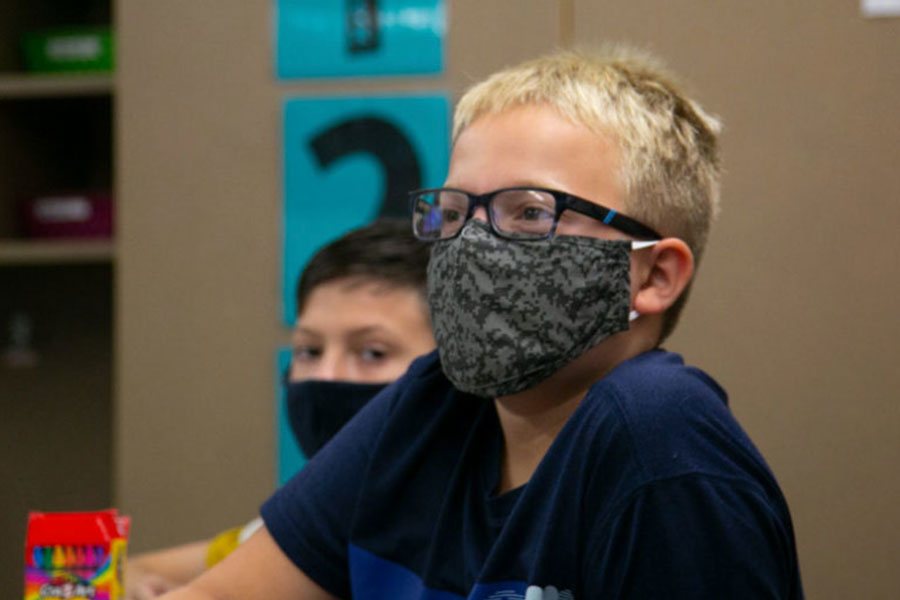 The Kansas Supreme Court on Tuesday will conduct a hearing over a case that began with two parents' challenge last school year to the Shawnee Mission School District's mask requirement. A Johnson County judge ruled this summer that SB 40, a state law the parents used to sue the district, was unconstitutional. File image.

A controversial Kansas law that some parents used to sue school districts over their mask rules comes before the state Supreme Court Tuesday for arguments on whether it is constitutional.

The law, known as SB 40, was used in lawsuits last school year against the Shawnee Mission, Blue Valley, Olathe and USD 232 (De Soto) school districts by parents seeking exemptions from the districts’ requirement that children wear masks while in school.

District officials say in court filings that certain aspects of the law have been costly and overly burdensome.

The law was approved by the Republican-controlled legislature this spring and signed by Democratic Gov. Laura Kelly.

School officials particularly have objected to a provision in SB 40 that requires a hearing be held within 72 hours of a complaint being levied and that missing the deadline results in a default judgment for the complainant. The law also gives broad standing to “aggrieved” persons.

The high court hearing Tuesday involves a case filed by Kristin Butler, of Shawnee, and Scott Bozarth, of Merriam, against the Shawnee Mission School District, which had denied their request for a hearing over the mask policy this spring.

Johnson County District Court Judge David Hauber ruled against the parents, saying their complaint was not within the law’s timelines.

But Hauber went further and also ruled that SB 40 was unconstitutional. He asked state Attorney General Derek Schmidt to weigh in on the law’s legitimacy.

Schmidt responded with a brief arguing Hauber didn’t have to rule on SB 40’s constitutionality since the end of the statewide emergency declaration this summer made the question moot.

The case has prompted amicus briefs by several parties claiming the law has resulted in unreasonable expense and a “fire drill” deadline that does not allow proper time to prepare a legal defense.

In its brief, lawyers representing the Blue Valley School District cited the district’s “lived experience,” hearing nine grievances and defending against three SB 40 lawsuits before the end of the school year in May, 2021.

The district, its brief states, spent 190 hours of administrative staff time and $11,000 on hearings. Because of SB 40’s 72-hour timeline, the district had to hire outside hearing officers rather than schedule them at regular board meetings, the brief said.

“SB 40 is a cudgel designed to bully school districts into declining to take reasonable safety precautions during an ongoing global pandemic by subjecting schools that take such precautions to an unending gauntlet of baseless challenges,” the brief said. “The Kansas Constitution does not allow this madness.”

Kelly also filed a brief saying the end of the emergency declaration doesn’t mean the issues are resolved. A case in Morris County and a separate Blue Valley case are still pending, her brief said, adding that the bill intimidates and overwhelms school districts.

Kelly’s brief called the law a “heckler’s veto, effectively frustrating the will of the majority.”

“It completely ignores the – at least equal – interests and rights of all the parents, students, employees and citizens who support and are positively impacted by local safety measures,” the brief read.