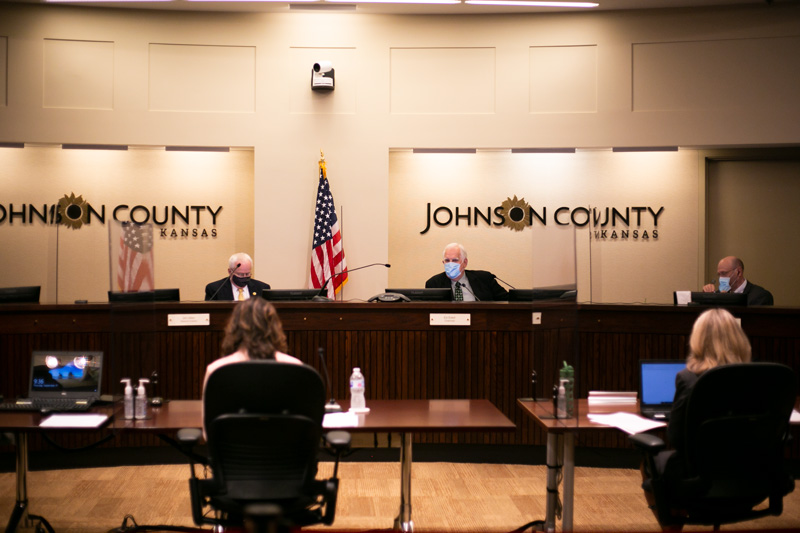 Three candidates, including two current commissioners, have filed to run for the chairmanship of the Johnson County Commission, which will be on the November 2022 ballot. Current chair Ed Eilert (seen above at center in blue face mask) has not yet publicly declared whether he intends to run for reelection next year. File image.

Although much attention in Johnson County is currently focused on municipal and other local races in the Nov. 2 election, a wide open contest is also developing for the top spot on the Johnson County Commission, which will be up on the ballot next year.

This week, a third candidate announced her intention to run for the chair of the commission, a spot currently held by Ed Eilert.

Eilert, who has served on the county commission since 2007 and been its chairman since 2010, has not said whether he intends to run for reelection in 2022.

“I have made a decision but the official announcement will come at a later date,” he told the Post this week.

The chairmanship is an at-large position in which the chair votes along with other commissioners but also plays a leading role in representing the county.

In her announcement, Allenbrand, an Olathe resident who won her first term on the commission last year, unseating Brown, characterized herself as a “voice of reason” for the chair position.

She emphasized her business experience designing residences for seniors and her work on various civic groups.

“Working together as a team is key to this county’s success, whether it be with our citizens, our cities, our businesses or our nonprofit sectors. It will take all of us to tackle the complex issues facing our county.”

Since the pandemic began, the county commission has been a focal point for often angry protests about public health measures such as mask mandates.

The commission has heard hours of testimony, mostly by people against the lockdowns from earlier in 2020 and mask requirements in schools and public places.

So far, all three candidates who have declared their intention to seek the chairmanship hale from the southern part of the county.

Brown and O’Hara list Overland Park addresses, although Brown had an Olathe address on previous campaign filings. O’Hara’s third district on the commission covers the southern and eastern part of the county, including southern Overland Park.

Allenbrand’s candidacy sets up a rematch of sorts between herself and Brown, after Allenbrand beat Brown last November for the District 6 seat she now holds.

Brown and O’Hara, who also won her first term on the commission last year, have both run from the right end of the political spectrum for the nominally nonpartisan office, emphasizing issues like rising property taxes and opposing tax incentives for development.

Both have also established themselves as skeptics of recommendations issued by county health officials and questioned data about local spread of COVID-19.

Last year, in the weeks before the 2020 election, Brown drew attention a Facebook post in which he urged supporters to arm themselves amid nationwide protests and instances of civil unrest following the police killing of George Floyd in Minnesota.

He later said he didn’t regret starting the conversation but might have chosen different words.

Brown’s campaign website for the chairmanship does not mention his pandemic-related stances. Instead, he emphasizes transparency and fiscal responsibility in the county’s spending and management.

Brown, his website says, forged relationships with other commissioners and elected officials, “where others thought no access or common ground could be accomplished or could exist.”

O’Hara has also questioned mask mandates and last summer attended an anti-vaccine rally where she urged candidates for other local nonpartisan races to run openly from the right.

A campaign website could not be located for O’Hara, but one of her major projects in her first year on the board has been to get an abandoned factory near Blue Valley Middle School demolished. Like Allenbrand, O’Hara will not be up for re-election in 2022.

On her campaign website, Allenbrand lists public safety, fiscal responsibility and quality of life among her top issues.