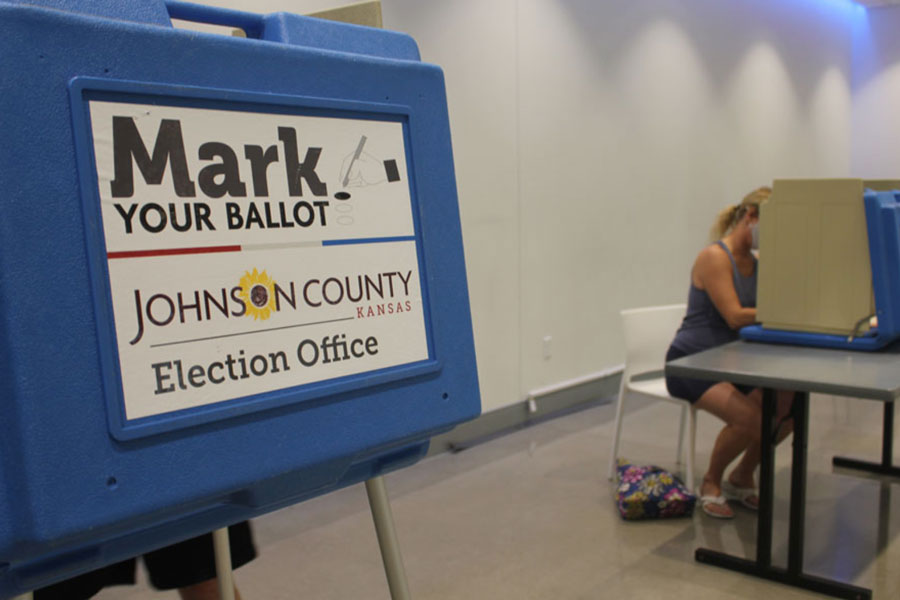 Johnson County election officials are predicting turnout for the Nov. 2 municipal election at or slightly above 20%, which would be a new high mark since the state moved such odd year, midterm elections from April to November in 2017. In 2019, turnout was around 17%. File image.

A higher-than-average voter turnout is expected in Tuesday’s municipal elections in Johnson County.

Sherman told Johnson County commissioners this year’s turnout may be near or slightly above 20% – which would be a high point for off-year, midterm elections that usually draw fewer voters than the partisan contests that happen in even years and feature races for state and federal offices.

Turnout in the 2019 city elections was close to 17%, according to the election commission archive.

Sherman said there’s been some improvement in voter turnout for city elections since the Kansas Legislature moved them from April to November, starting in 2017.

For her part, former county election commissioner Connie Schmidt also expressed her belief that, as in 2020, Johnson County is in for another active election:

25 years ago KS voters were given the right to choose how they vote – by mail, early in person or on Election Day. Local election turnout should bring out the same passion to vote as presidential election!!I’m expecting another record voter turnout in Jo Co KS. VOTE!! 🇺🇸❤️🇺🇸

Registration increased by just over 2,000 for Democrats and decreased by 4,974 for Republicans during that period.

Unaffiliated voters, however, showed the biggest increase from a year ago with 10,547 more registered this year than last.

Candidates for city elections this year will not have a party label on the ballot, though some races — most notably the much-watched contest for Overland Park mayor — have hinged, in part, on debates over partisanship.

Sherman told commissioners there have been a “handful” of inquiries about mail-in ballots that have not yet arrived, and his office has issued some replacement ballots.

The county uses the U.S. Postal Service for this, and Sherman said he’s seen delivery times of four or five days. He said people who have requested mail-in ballots but not received them yet can contact his office.

There have been enough poll workers so far, he added.

“We have not been in desperate need, but we could always use more volunteers,” he said.

Advance voting locations and times, ballot drop box sites and other information about voting can be found here.