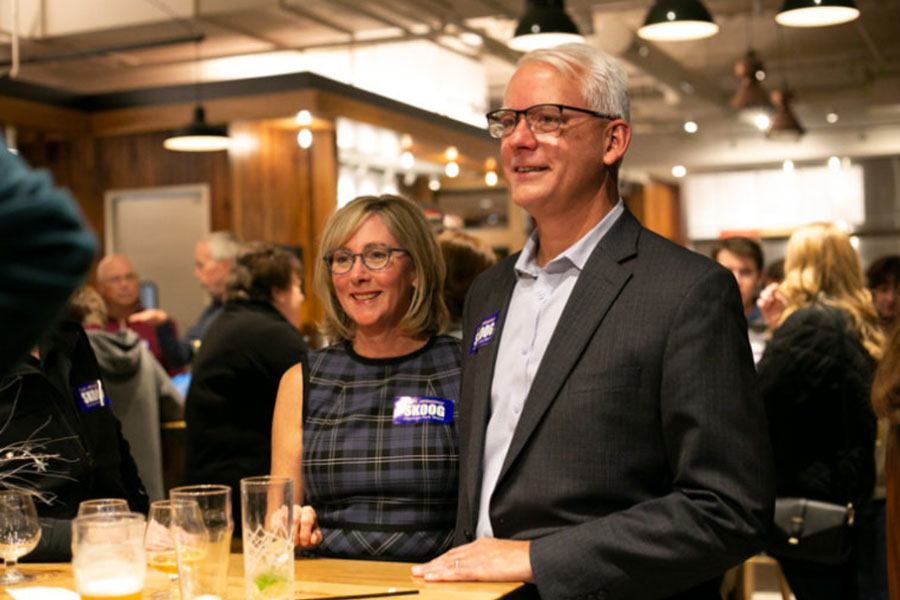 Curt Skoog and his wife Amy and an Election Night watch party. Skoog beat Mike Czinege with 50.57% of the vote to become the next mayor of Overland Park. He'll be sworn in in December. Photo credit Leah Wankum.

Unofficial final totals from Tuesday showed Skoog winning 50.57% of the vote to Czinege’s 49.16%.

Skoog, who has been on the council 16 years and is currently council president, will replace longtime incumbent Carl Gerlach, who did not run for re-election.

Skoog and other newly elected councilmembers will be sworn in Dec 6.

“I’m excited that we have this election behind us,” Skoog said. “The hard work is going to start tomorrow in building consensus among the council.”

Consensus is important because the mayor doesn’t usually vote except to break a tie on the 12-member council.

“It’s about implementing the vision of the community through the city council,” he said.

Skoog said he will make a priority in the coming days of reaching out to people who didn’t support him to “find our common ground. There’s more issues that we agree on than that divide us, and I look forward to having that discussion with the community.”

Skoog, 57, campaigned on the city’s successes of new vitality downtown, ongoing development that encourages sustainability and walkable neighborhoods. He frequently mentioned the city’s many top ratings in national publications as a good place to live, work and raise a family.

He said he was a candidate dedicated to moving forward and doing the things the city needs to do to attract a younger generation that will want to continue living in the city.

But he also said Overland Park still needs to work on ways to encourage housing that would be affordable to workers starting out or in lower-paying jobs.

Although party politics are usually below the surface in nonpartisan mayoral and council races, they were more noticeable this year.

Czinege openly identified himself as a Republican during the campaign, going so far as to put the GOP elephant symbol on his campaign signs, despite the fact that no party identifier appears on the ballots.

Czinege, 68, and a retired executive with AMC Theaters and Applebee’s restaurants, also emphasized his business experience during the campaign and was critical of how the city has handled its budget, the proliferation of apartment complexes and tax incentives for development.

In particular, he said citizens are dissatisfied with development of more apartments near their neighborhoods of single-family homes.

The vote will not become official until after the Nov. 9 canvass by the county election office.