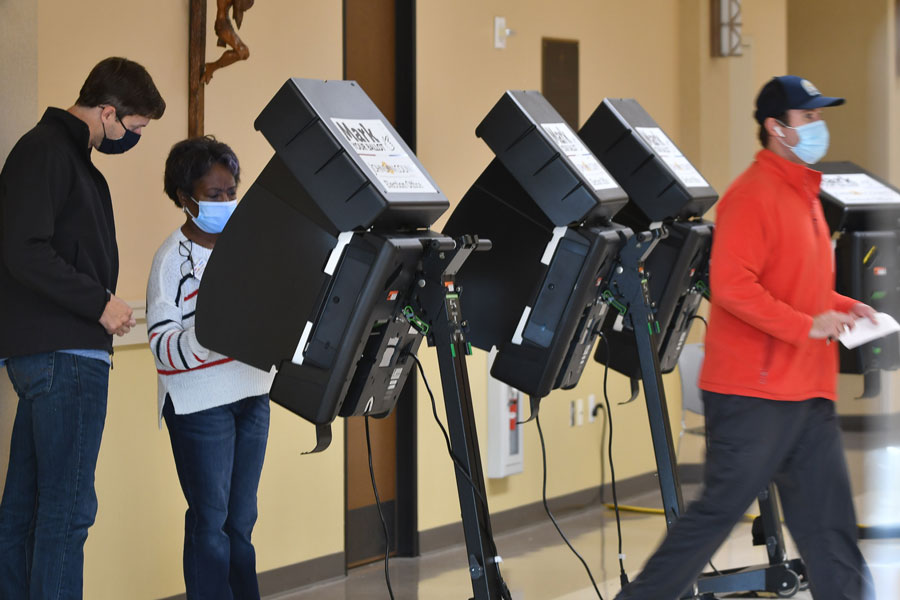 As of Wednesday, the Johnson County Election Office says voter turnout for the Nov. 2 election was 24.88%, a figure that will likely go up a bit more as mail-in and provisional ballots are added to the total in coming days. File image.

More Johnson County voters went to the polls or mailed in ballots for the 2021 general election than in any other recent odd year election.

As of Wednesday, the Johnson County Election Office reported 110,027 ballots cast, for a turnout of 24.88%.

And that number will continue to creep up over the next few days as mail-in ballots that were dropped off or postmarked before polls closed on Election Day are added to the total, along with provisional ballots.

Comparisons to past odd year elections

Turnout for odd year local elections historically is much lower than even year elections, which feature state and federal races that drive many more people to the polls.

For context, turnout for the 2020 presidential election in Johnson County topped 77%.

But in 2015, Kansas lawmakers changed state law in an effort to increase turnout for odd year municipal races, moving those elections from  from April to November.

The first election cycle impacted by that change was in 2017. Before that, odd year local elections in Johnson County typically drew turnout in the neighborhood of 10%.

Since the change, however, Johnson County has seen an increase in voter turnout for this typically overlooked local elections.

Nathan Carter with the Johnson County Election Office said he believes the large turnout this November was due to several high-interest races.

“School board races, for example, as well as the mayor race in Overland Park,” Carter said.

Johnson County’s four biggest public school districts had multiple school board seats on the line with candidates sharply divided over mask rules and districts’ approaches to diversity and inclusion.

Additionally, the Overland Park mayoral contest promised to elect the first new mayor in the city in 16 years, with four-term Mayor Carl Gerlach stepping down.

Another reason, Carter said, behind the high turnout is increasing accessibility.

During the first five days of advanced voting alone, Johnson County voters were setting a record pace for advance voting turnout in a local election, according to the county’s election website.

By the Friday before Election Day, 15,969 advanced votes had already been cast.

The total proportion of votes advanced ballots made up of all votes cast this year is not yet available, but election officials will present a final report when the final results are certified on Nov. 9.

Now that voting is over, Carter says the Johnson County Election Office will continue to count votes each day this week as mail-in ballots delivered or postmarked on or before Nov. 2 come in.

Updates to Tuesday’s unofficial results will continue to be released Thursday and Friday evenings around 5 p.m.

Official final results will be announced at 4 p.m. on Tuesday, Nov. 9 after the Board of County Canvassers certifies the results.