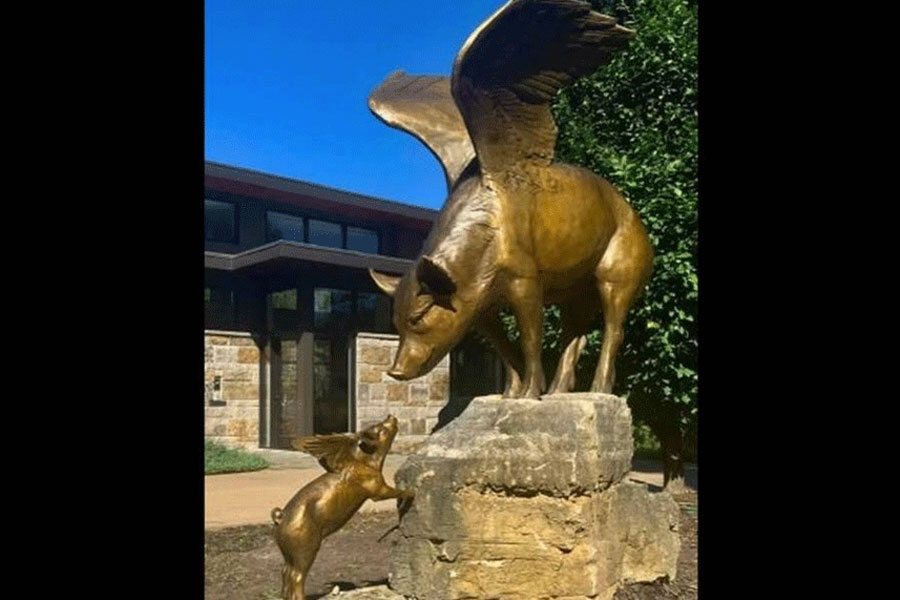 The baby pig portion of a 55-inch bronze winged pig statue was stolen from a Mission Hills home last week. The owners have filed a report with the Prairie Village Police Department. Image via Carolyn Patterson.

Carolyn Patterson says she felt devastated when she realized part of a 55-inch bronze sculpture was missing from her front yard in Mission Hills.

The sculpture depicts a winged pig mother and her baby. The mother stands top a rough-hewn stone base looking down at her piglet.

Now, the baby pig is missing.

The baby pig sculpture was taken around 4 a.m. on the morning of Tuesday, Nov. 16, from in front of Patterson’s home. Its whereabouts are still unknown.

According to Patterson, video surveillance from her residence shows a young-looking man driving up to her house and ripping the piglet out of the rock it sat on before driving away with the statue.

“They lifted up more than 70 pounds of concrete and stone,” Patterson said. “The pig was pretty well installed in that rock with rebar.”

In an interview with the Post, Patterson said the baby pig, along with the mother, came installed on a stone base by the artist Margery Torrey.

Patterson said neither she nor Torrey realized how soft the type rock actually was. Thus, with a few concerted yanks, the rock cracked, allowing the thief to make off with the piglet.

It was not just Patterson who was upset to learn the art installation had been taken. She says many in the Mission Hills community have expressed their sadness over the incident.

Since the pig’s disappearance, several neighbors have written on the Nextdoor app about how they miss seeing the art during their morning commute.

“Sad news to hear,” one user commented on a post about the missing pig statue. “I love driving by this sculpture.”

“Unbelievable!” another commented. “People can’t have nice things anymore … Shame on whoever helped themselves to others’ property.”

“So many have indicated that it made them laugh, it made them happy, it made them smile,” Patterson said. “Some people have even said they made a special trip to drive over because they wanted to see it.”

The sculpture in her front yard is one of hundreds of pig-related items Patterson says she and her husband Bill have collected over the years as a way to commemorate their travels around the world.

After seeing a similar pig art installation made by Torrey during a trip to Asheville, N.C., Patterson said she decided to reach out to the artist to have her own pig statue made.

“What I’m hoping is that some morning soon I will look out and the person who took it will have decided to return it,” Patterson said

After the incident, the Pattersons did file a police report with the Prairie Village Police Department, which also oversees Mission Hills.

Chief Byron Roberbson said as of Monday, there are no current updates on the case.

If the piece is not returned, Patterson said, the plan is to have Torrey construct a replacement.

“Next time around it’s going to be installed in a different manner so that this won’t happen again,” Patterson said.