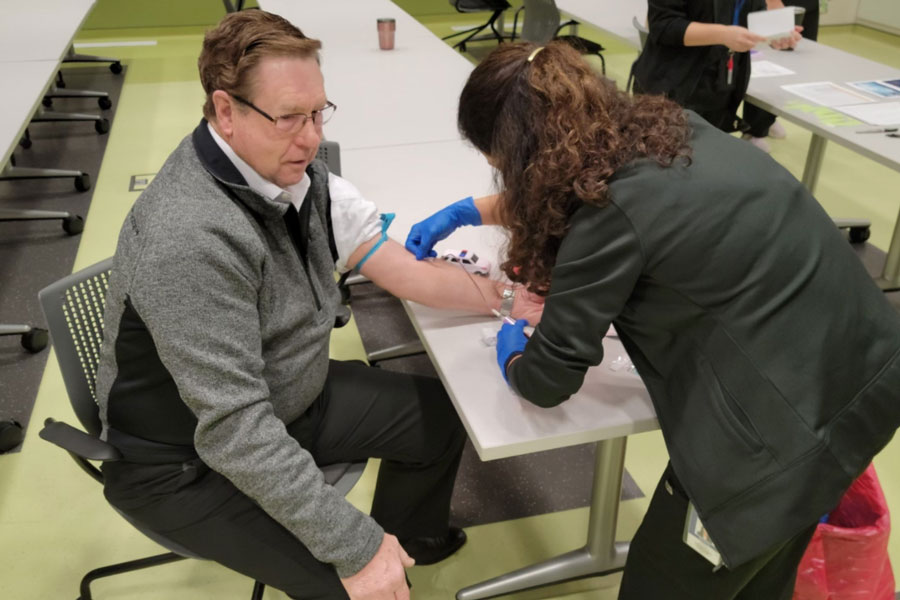 Johnson County Sheriff Calvin Hayden says so far about 160 department staffers have expressed interest in receiving a new kind of COVID-19 antibody screening test aimed at measuring the strength of an individual's immunity to the disease. Hayden has opted his department out of a county manager's directive requiring most other county employees to either get vaccinated or undergo weekly COVID-19 testing. Above, Hayden gets his blood drawn for a new antibody test. Image courtesy Johnson County Sheriff's Office.

During the course of the pandemic, some 170 employees of the Johnson County Sheriff’s Office — including Sheriff Calvin Hayden himself — have contracted and recovered from COVID-19.

The Sheriff’s Office was never part of a directive requiring most other county employees to get vaccinated or submit to routine testing. Hayden opted his office out of participating, saying he’d leave it to his employees to assess their own risk.

Now, with COVID-19 cases again increasing in Johnson County and the emergence of a new variant of the SarsCoV-2 virus sparking worries of a potential new global surge in the disease, sheriff’s employees may be wondering how their immune systems are holding up.

They still won’t be required to take the vaccine or show negative COVID tests. But Hayden says he will spend an estimated $30,000 from his budget to offer sheriff’s employees one-time free access to a new antibody test that he believes will give them better information to make their decision on whether to get vaccinated.

“The good thing about this it’s not pro- or anti-. It’s just information,” Hayden told the Post. “You make your decisions. I really don’t want the government telling me or you what you need to do to take care of yourself. I think a doctor needs to do that.”

The test is AditxtScore for Covid-19, from Richmond, Va.-based biotech company Aditxt.

Its developer describes it as a test that can provide more specific data about immunity strength to both the vaccinated and unvaccinated who have contracted the virus.

The Johnson County Sheriff’s Office will be the first in the nation to partner with Aditxt for the tests.

Normally the tests would cost $250 apiece with insurance, but Hayden’s office will only be charged $150 per test, he said.

So far 160 officers have said they’re interested in getting screened, so Hayden estimated he may need around 200 tests.

Crime lab personnel are equipped to do the blood draw, and the results come back directly to the employee, who can then discuss appropriate action with a doctor, Hayden said. The arrangement gives the employee one free test on the county.

Hayden said he will make room in his existing budget for the tests, and there will be no need for further approval from the county commission.

Hayden’s office is separate from the county manager’s administrative purview and does not fall under the vaccination and testing rules that went into place after the Delta variant surged over the summer.

The test went on the market last August, said Dave Owen, president of KanVest Services LLC and the person who sold Hayden on the idea.

Owen, who markets the test for Aditxt, said the company had been concentrating on selling to labs and hospitals before partnering with the sheriff’s office.

“Other antibody tests really just tell you, ‘Yes, I have antibodies’ or, ‘No I don’t.’ This test not only gives that answer, but it gives you the level of antibodies in your system and whether or not you have a sufficient level of antibodies to be resistant to COVID-19. That’s pretty major,” Owen said.

He said the test accuracy levels are above 99% for specificity and sensitivity.

As far as federal regulators are concerned, the new test falls into the “lab-developed test” category, meaning it doesn’t have the same level of Food and Drug Administration scrutiny as vaccines that are fully authorized. But it has been approved for Medicare reimbursement and insurance coded, Owen said.

However, some of that oversight was relaxed as officials sought quick approval for COVID tests in 2020. That decision is being revisited.

According to published reports, Aditxt already has CLIA (Clinical Laboratory Improvement Amendments) certification that it meets industry standards from the federal Department of Health and Human Services and will also seek Emergency Use Authorization for the test, but it is not currently approved by the FDA.

Experts disagree on whether antibody tests should be a widespread tool for assessing COVID-19 immunity or used in more targeted interventions with specific groups, like long term care facility residents. But Owen said he sees the law enforcement community as a good match.

Law enforcement officers and first responders have direct contact with the public, yet members of some big city departments across the country have made news in recent months for their opposition to vaccine mandates.

Owen said the tests can give officers who must be in close quarter with the public peace of mind. Since Hayden posted on his Facebook about the test, Owen said he’s received several contacts from other law enforcement agencies.

“Our premise is people are making health decisions on this subject with little or no information and that’s why we think this test can be so helpful,” he added. 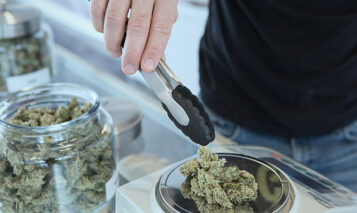