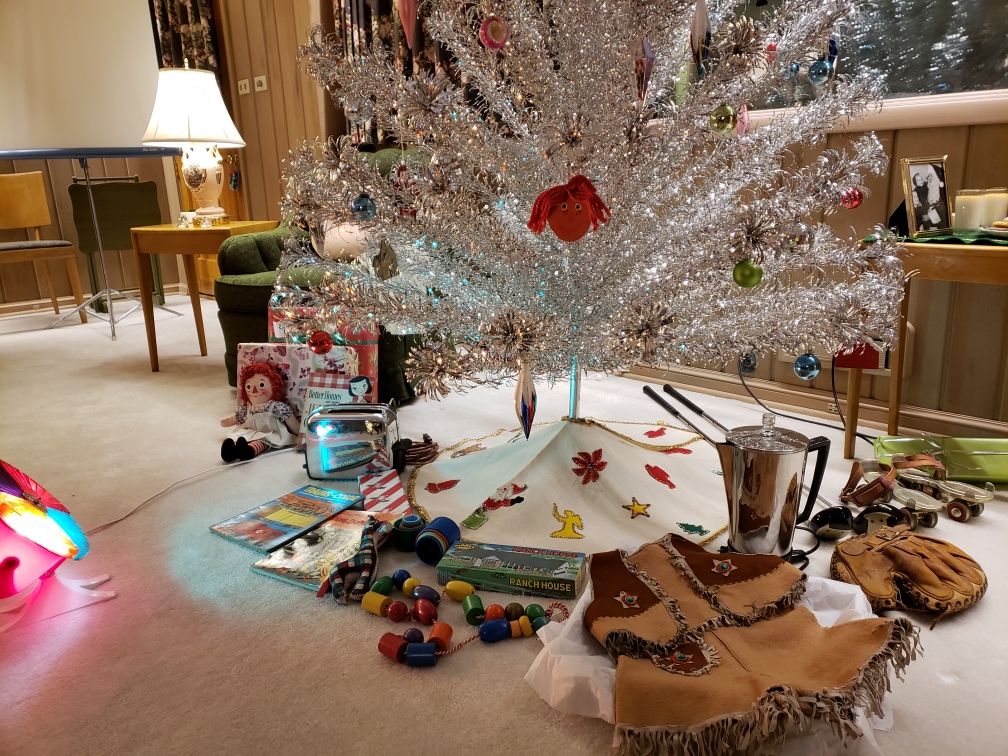 Mid-Century gifts under an aluminum Christmas tree in the All-Electric House at the Johnson County Museum.

Each year, Johnson County Museum staff transform the All-Electric House’s interior and exterior into a Mid-Century Christmas wonderland, placing holiday touches throughout the home that make it appear as though a 1950s family lives there. Christmas cookie cutters in the kitchen. A child’s red velvet dress in the nursery. A Santa hat hanging on the bedpost. And of course, the iconic aluminum Christmas tree, front and center in the living room.

During the 1950s, the United States experienced economic growth. The prosperity was evident in the increase in consumption of goods, especially during the Christmas season. In 1954, the year the All-Electric House was built, the Kansas City Times reported that sales in the area would top the previous year, and were “showing signs of breaking the all-time record established in 1952.” This consumerism was due in large part to increased advertising. While the newspaper and magazine were still the primary forms of advertising in 1954, the proliferation of the television set in American middle-class homes presented a new and powerful marketing medium. Toys and tie-in products from popular television shows, such as “Davy Crockett” and “Roy Rogers Show,” were among the most popular Christmas gifts in the mid-1950s.

In post-World War II Johnson County, the automobile and new suburban developments compelled stores to move out of downtown Kansas City. Prairie Village’s shopping center was built in 1948. Others, such as RanchMart and Mission shopping centers, were completed in the 1950s. They epitomized the contrast to traditional downtown storefront shopping. The Mission Shopping Center was a large indoor complex that “embodied everything modern in shopping convenience and a large acreage set aside for parking space.”

Accompanying these societal changes, Christmas traditions and decorations were reinvented and updated to reflect the modern post-war culture. Decorating books and magazines from the 1950s advised housewives to abandon the traditional red and green colors of Christmases past and choose a color scheme that complemented their own home décor. Chemically treated logs ablaze in the fireplace, candle arrangements, a display of Christmas cards, wreaths, electric candles in the windows, and sleigh bells on doorhandles were recommended decorations to create a festive atmosphere in the home. Outdoor Christmas lights were advertised heavily after 1947, when GE was finally confident it could produce enough lights to meet demand. Their parallel lighting system allowed the strand to stay lit if one light burned out. By the 1950s, suburbs were home to some of the first do-it-yourself outdoor Christmas light displays

Artificial trees were advertised as a safer, more responsible alternative to fresh-cut evergreen trees as early as the 1890s. Historian Karal Ann Marling wrote: “By the 1950s, after a decade of wartime privation and drab uniformity, color-bright, unnatural shades-assumed enormous importance in all sorts of consumer products, from cars to cake mixes. Even Christmas trees reflected the dominant trend in the 1950s toward artificiality, new materials, hot pastels, and tactile surfaces. The chubby ‘bottle-brush’ tree of nylon, the glow-in-the-dark tree, and trees of Lucite, shredded aluminum, spun glass fibers, or tinted plastics all flourished.”* They were available in minty green, glittery silver, shocking pink, or winter white.

The aluminum Christmas tree, such as the one inside the All-Electric House, was first produced commercially in 1959. When the “forever tree” was unveiled to an American public used to driving to Christmas tree farms and strapping a tree to the roof of the car, shockwaves of modernity ran through stores, decorating magazines, and middle-class living rooms. Aluminum Specialty Company, with its “Evergleam” tree, was but one of many companies that produced the newest, modern Christmas fad. Decorated with “Shiny Brite” glass ornaments of non-traditional blue, silver, and pink, and lit by indoor spotlights or a rotating color wheel, the aluminum Christmas tree quickly caught on. By 1963, it was a staple in the Sears Christmas Book, and sold in many other department stores. Journalist Tom Vanderbilt wrote (perhaps somewhat tongue-in-cheek): “The aluminum tree was a shining beacon to the optimism of the Space Age, a monument of Pop modernism, and proof of American manufacturing prowess. Where else but in a country that had conquered a sprawling and primeval wilderness could Nature herself be improved upon?”**

Despite the commercialization and emphasis on artificiality in the 1950s, Christmas still held much of its traditional meaning for Americans. The focus on religion, family, and friends remained strong. Thoughtful gifts and family get-togethers held their usual place of importance. Holiday cocktail parties, potlucks, and gatherings were important seasonal social events. Music and food remained at the center of Christmas festivities. Although the look of the Mid-Century Christmas might have been shiny, modern, and new, the nostalgia of being “home for the holidays” was as important as ever.

** Quote from Tom Vanderbilt’s essay “Trees for an Age of Glitter,” in Season’s Gleamings: The Art of the Aluminum Christmas Tree, by J. Shimon and J. Lindemann. 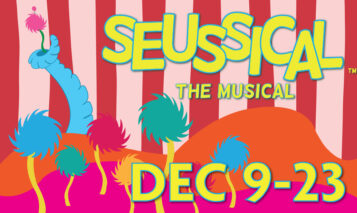 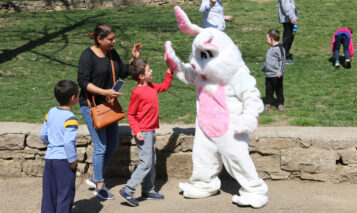 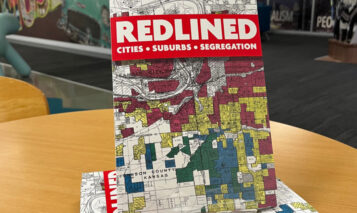 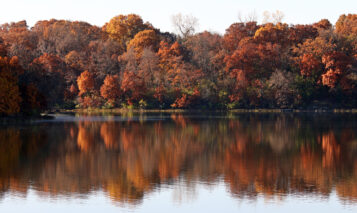 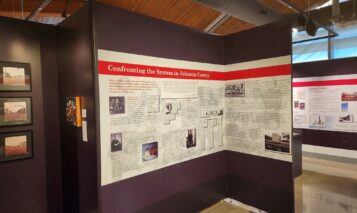