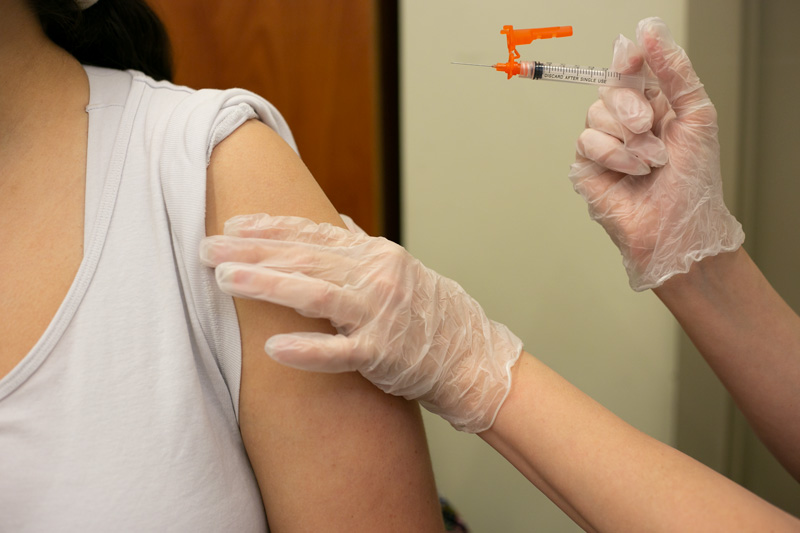 Johnson County Department of Health and Environment data show spread of COVID-19 is reaching heights last seen in August during a Delta-fueled spike in cases. JCDHE continues to encourage people to get vaccinated, wear a mask, frequently wash hands and stay home when sick. Above, a COVID-19 vaccine is being administered. File photo.

New COVID-19 cases in Johnson County remain elevated following the four-day Thanksgiving weekend, and local health authorities say they are warily eyeing developments about the increasing spread the new Omicron variant, an official case of which has yet to be identified in the U.S.

After seeing a spike in COVID-19 cases ahead of Thanksgiving last week, the county’s metrics for measuring COVID-19 transmission have remained high.

The incidence rate shot up to 226 per 100,000 persons last week before the holiday, the highest it had been since a late summer surge fueled by the Delta variant.

This week, the incidence rate has fluctuated sharply. By Wednesday, it stood at 218 cases per 100,000, according to the Johnson County Department of Health and Environment’s online COVID-19 dashboard.

County health director Sanmi Areola, Ph.D., told the Post via email Wednesday that the fluctuating incidence rate was due, in part, to the holiday affecting testing.

JCDHE also recently adjusted how it calculates incidence rate. On Nov. 19, it began including both confirmed and probable cases of COVID-19 in its incidence rate calculations,

Areola said JCDHE made that adjustment because of an increase locally in the use of antigen tests to screen for COVID-19. Including both confirmed and probable cases makes the incidence rate a more accurate representation of potential spread in the community, he said.

Similar to the incidence rate increase, percent positivity in Johnson County has also spiked and stood at 8.8% on Wednesday. That compares to 7.3% on Nov. 24, the day before Thanksgiving and is the highest that figure has been since mid-August.

However, nearly 60% of eligible Johnson County residents — including nearly 85% of people 65 and older — are now fully vaccinated, according to county data.

About 68% of eligible residents, which now includes children ages 5-11,  have received a first dose.

Still, some local hospitals are seeing an increase in COVID-19 patients.

The University of Kansas Medical Center currently has 27 active hospitalizations, according to the medical center’s Nov. 30 news briefing.

Chief Medical Officer Steve Sites said he thinks that number “heralds, perhaps, yet another wave we need to be thinking about.”

As for the Omicron variant, Areola said JCDHE doesn’t have enough information at this time to issue clear guidance. He said the department “will continue to share” information as they learn more.

Stites and other panelists on Tuesday’s KU Facebook briefing agreed it’s too early to predict what might come of it.

JCDHE’s guidance for mitigating the spread of COVID-19 remains the same as it’s been for months now, Areola said.

“[We] continue to recommend a layered approach to prevent illness from COVID. Get your vaccination — first, second or booster — wear a mask, wash your hands frequently and stay home if you are sick,” Areola said.