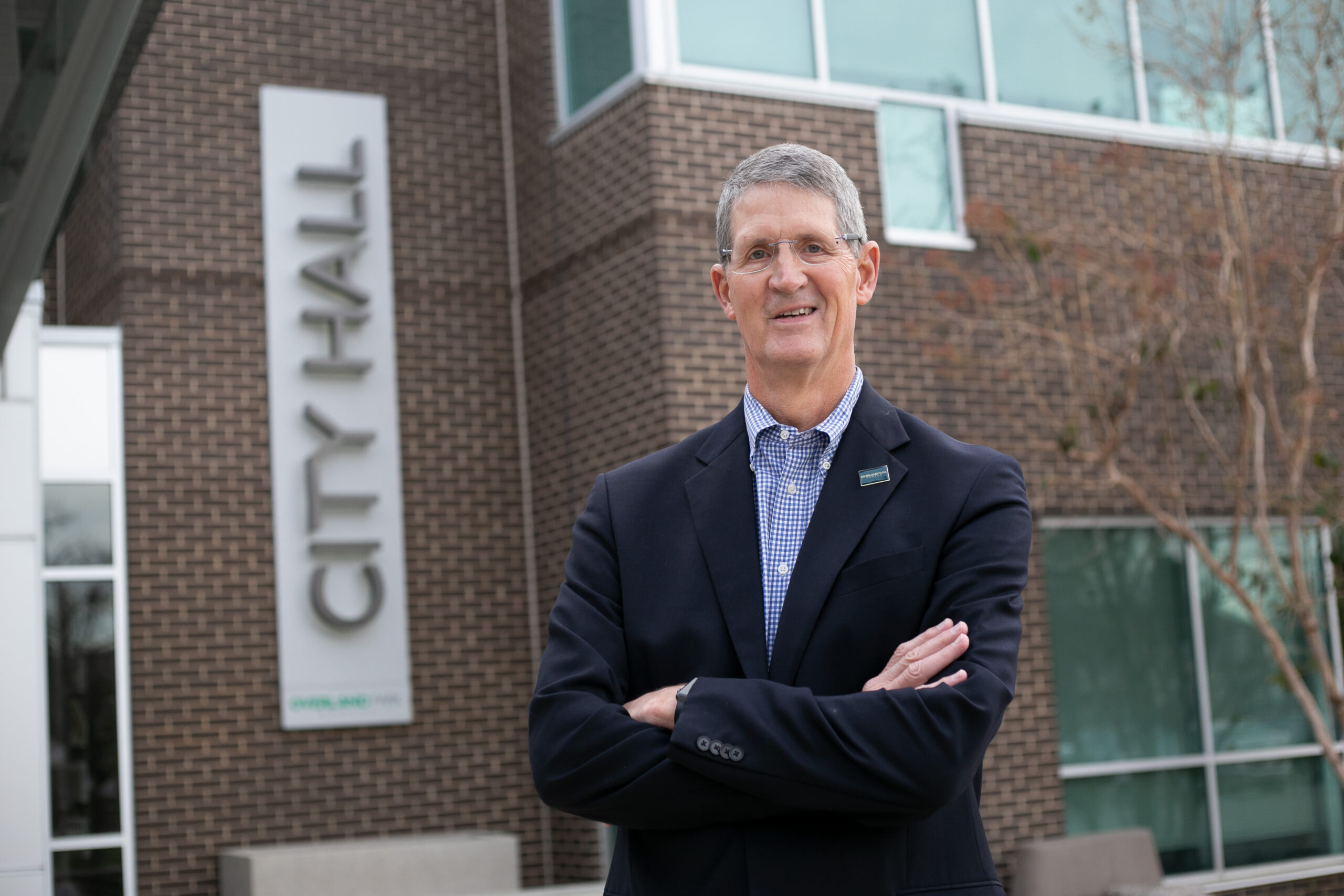 This month marked the end of Carl Gerlach's tenure as mayor of Overland Park. He held the city's top job for 16 years, making him one of the longest-serving public officials in recent Johnson County history. "It has changed my life because of the people I’ve met. It’s changed my life because of the information I’ve learned," Gerlach told the Post. Photo credit Leah Wankum.

Council president and incoming mayor Curt Skoog had just read a lengthy commendation of Gerlach’s accomplishments, and a staffer was getting some cell phone pictures as the standing ovation began to die down.

“As everybody in the room probably knows, I’m not comfortable with all of this,” Gerlach said, before saying thank you to his family, councilmembers and staff.

Never a headline-grabber, Gerlach said later he’s always been a little leery of the spotlight.

As a former college basketball player, “I learned the advantage of how much more a team could do together than an individual,” he said in a recent interview with the Post.

His motto: “It’s amazing what can be accomplished when it doesn’t matter who gets the credit.”

This month, Gerlach ended 26 years as an elected official in Overland Park, first as a councilmember from 1995 to 2005 and then as mayor for the past 16 years.

With a typically quiet demeanor and noticeable aversion to public attention, Gerlach bucks the stereotype of a politician.

“I never wanted to call myself a politician because I don’t think I was,” he told the Post.

Instead, Gerlach says he thinks of himself as a public servant with a lot to learn. Nothing about Gerlach’s early life pointed toward his tenure as one of Johnson County’s longest-serving elected officials.

A Johnson County native and Shawnee Mission South graduate, he got a business administration and marketing degree from Kansas State University, where he also played basketball. (He also did a brief stint playing professionally after college.)

He never sat on the student government at K-State and later took a job with Gill Studios, a Lenexa-based printer and sign maker. But he always remembered his grandmother’s teaching that he should give back to the community.

Gerlach fell into city government after he began keeping track of council meetings for the Overland Park Chamber of Commerce. The meetings, he said, “were interesting. I really enjoyed them.”

Then-mayor Ed Eilert and Councilmember Greg Musil urged him to run for a council spot, he said. Eventually he took Eilert’s mayoral seat when Eilert became chairman of the county commission.

Over the years Gerlach has seen the city through some of its biggest highlights and most contentious issues – construction of the Convention Center, renovation of the downtown area, development of the former Sprint campus, a youth soccer complex and the Brookridge development.

Gerlach sees the widening of Metcalf Avenue and later, the Vision Metcalf plan to redevelop the older part of town, as an early effort that has had a lasting positive effect.

Gerlach grew up just across the city border in Leawood, but often went with his dad to a hardware and sporting goods store in Overland Park’s downtown. “So I loved downtown,” he said.

As its vibrancy began to fade, Gerlach said he became determined to bring development back to that area, while at the same time encouraging “green field” development to the south.

Several mixed-use projects later, the downtown streets are busy with shoppers and new apartment residents, and the nearby Thompson Park has been finished.

Those changes also sparked vigorous objections from longtime residents, some of whom did not welcome the added traffic, murals and apartments. But Gerlach believes the majority of city residents like what they see.

“There’s always going to be a group of people who are against change. I feel change is necessary to continue to grow. If a city stops growing it starts dying,” Gerlach said.

The Scheels Soccer Complex is another effort born from controversy that has become a well-loved addition to the city, he said.

Early in Gerlach’s term as mayor, a professional soccer stadium for Sporting KC was proposed for Overland Park, but was turned down by voters. But Gerlach said he and other city leaders saw the increasing popularity of youth soccer and pushed for a state-of-the-art youth complex that would bring people to hotels and restaurants for the tournaments.

Gerlach’s final years in office have been marked by some significant challenges.

He has seen the city through controversial developments, most notably the plan to remake the old Brookridge golf course near 103rd Street and Antioch Road.

That project prompted months of meetings and frequently angry outbursts by neighbors of the proposed mixed-use development when it was debated in 2019.

In December of that year, Gerlach cast the tie-breaking vote approving a final financing package for the project worth more than $200 million.

Gerlach is now cautiously optimistic about the eventual outcome of that project, because he said city leaders have insisted that it be first-class.

“I’m not sure yet if it will get developed, but part of it will,” he said. “If it’s developed it will turn out to be a good project.”

He has also been at the helm as the city navigated the COVID-19 pandemic, debating the breadth and scope of local restrictions and its response to the economic downturn caused by the crisis.

But nothing may have garnered Gerlach more criticism and scrutiny in his 16-year tenure than the city’s handling of the fatal police shooting of 17-year-old John Albers in 2018.

Albers was shot and killed after officers responded to his family’s home to check on his mental well-being in January of that year.

The killing sparked a lawsuit against the city and a still-unresolved controversy over a severance payment awarded to Clayton Jenison, the officer who killed Albers.

A civil rights investigation being conducted by the FBI is still ongoing. That probe reportedly includes the severance deal and the city’s process in finalizing it.

Gerlach says Albers’ killing was tragic but that the city responded well by creating a mental health task force to address training for front-line employees in dealing with mental health crises. He also credits the work of task force chairman and former Councilmember Chris Newlin for that.

The pandemic has presented other challenges, as city officials dealt with public health orders and lockdowns in the early days. Along with that has come a renewed interest in party politics.

As far as partisanship at the city level goes, Gerlach has lived in both worlds.

Overland Park’s council elections were partisan when he was first elected as a Republican more than a quarter century ago, he said.

In fact, the city was the last in Kansas to go to a non-partisan system. His first run for mayor in 2005 was the first non-partisan city race, he said.

Gerlach now says he prefers the non-partisan system. Often councilmembers on both sides will agree about a problem that needs to be solved, he said. The partisan differences usually are about how to solve a problem and how fast, he added.

He said tensions between councilmembers have been more about personality conflicts than party politics.

As for the future, Gerlach said he had hopes for the potential of Forward OP, the city’s long-term plan, to boost schools and businesses by making the city more welcoming and inclusive.

The visioning plan conducted during his tenure, he says, was arrived at after much public discussion and now serves as guidance for city policy on such things as affordable housing, sustainability and diversity.

“It’s still early but I believe Forward OP plan is going to be something that is looked back on as a very important step for our city.” he said.

Now that he’s out of the council (and also retired from his full-time job at Gill), Gerlach said he plans to take a gap year or six months traveling with his wife, Jill, and spending time with his three grown kids, two young granddaughters and a grandson due to be born any day now.

One of Gerlach’s goals, he said, was to make the city a place young people would come back to live in after graduation. He says he’s accomplished that at least with his own family, who all now live in Overland Park.

After that, he said, he may get back into some kind of civic involvement.

“I’m one of those that can’t just sit in a rocking chair,” he said.

Looking back, Gerlach said life in city service has changed him in some ways but not in others.