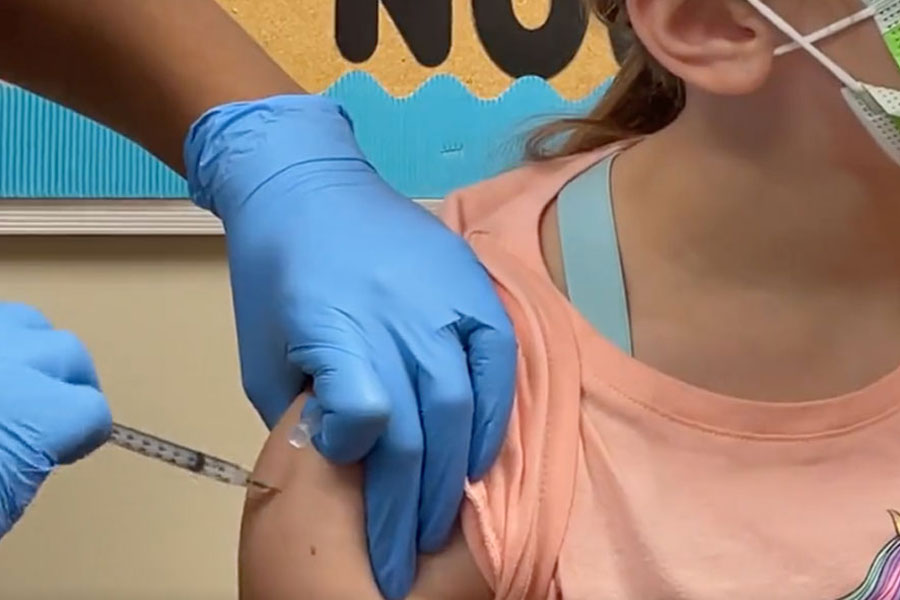 New COVID-19 case numbers in Johnson County are peaking at levels not seen since January, when mass vaccinations were just getting underway. Still, there is optimism that the county's relatively high vaccination rate now will help blunt the impacts of a fourth wave of cases. Above, a young patient receives a COVID-19 shot. Image via Johnson County Department of Health and Environment.

New COVID-19 cases in Johnson County have increased dramatically in the last week following the Thanksgiving holiday, once again straining local hospitals’ capacity and prompting renewed pleas from health officials for residents to get vaccinated.

Why it matters: Local health officials worry this could be the beginning of a fourth surge of cases in the Kansas City region, an ominous sign going into winter when people tend to stay indoors and respiratory ailments spread more easily.

The details: The Johnson County Department of Health and Environment’s online COVID-19 dashboard on Tuesday reported an incidence rate of 348 per 100,000 and positivity of 11.4%, figures not seen since early January, when widespread vaccinations were just getting underway.

Key quote: “What we’re seeing now is what we were afraid of,” Steven Stites, MD, chief medical officer at KU Medical Center, said in KU’s daily briefing Tuesday. “This is the most rapid escalation [of cases] we’ve seen since the pandemic started, just in terms of the number of new cases coming in.”

Reason for optimism: Johnson County remains the most vaccinated county in the Kansas City area, which will help blunt the severity of a new surge’s impacts. According to JCDHE, nearly 70% of eligible Johnson County residents have received at least one shot.

In the meantime, the FDA is expected to soon authorize antiviral pills that have been shown in clinical trials to greatly reduce the risk of severe illness and death from COVID.

Worrying hospitalization trend: As in previous waves, local hospital leaders are warning that their resources are being strained with the rapid rise in new cases.

AdventHealth Shawnee Mission reported 31 patients with active COVID-19 infections as of Tuesday. Only two of those patients had been vaccinated, according to chief medical officer Lisa Hays, MD. She said all but two of their current patients are unvaccinated.

Metro-wide, average daily hospitalizations have increased to 136, a jump of nearly 39% from last week.

Blue Valley, Olathe, Shawnee Mission and USD 232 in De Soto all report significant increases in the number of students either testing positive or in isolation at home due to potential exposure.

All these districts except Shawnee Mission have loosened mask requirements for older students, though a countywide mandate for masks in schools serving children up to 6th grade remains in effect.

No Omicron identified yet: This most recent surge in local cases, health officials say, is being driven almost entirely by the Delta variant still.

No local cases of Omicron have been sequenced and identified, though health experts say that variant is likely to soon appear locally and may already be here circulating among the population.

How to stay safe: It’s nothing new, say local health officials, who encourage eligible residents to get fully vaccinated.

If you have already received a full two-dose regiment of the Moderna or Pfizer vaccine, you’re encouraged to get a booster shot. Same if you have received the one-shot Johnson & Johnson shot.

If you have children 5 and older, it’s advised you get them vaccinated.

And JCDHE and other health leaders in the Kansas City metro still encourage people to wear masks in most public settings.