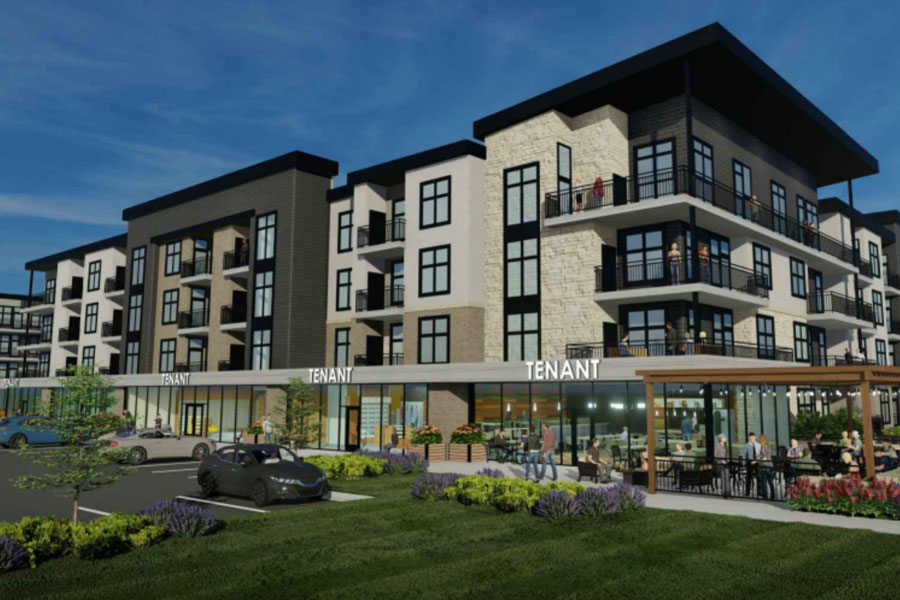 The proposed mix-used development would sit on more than 116 acres of land south of 133rd Street and west of State Line Road. It would be built on 116 acres, and have 843 dwelling units in total. The complex would have luxury apartment, single-family homes, assisted living facility, retail and office space. Image via Leawood city documents.

Passion could be heard in the voice of residents as the Leawood City Council voted this week to once again continue the discussion for the rezoning and preliminary plan for Cameron’s Court.

It marked at least the sixth time in recent months that a final vote on the controversial mixed-use development has been put off.

Plans for Cameron’s Court, which would span more than 100 acres near 133rd Street and State Line Road, have been in discussion between the developer and the city for almost two years.

The newest plan presented Monday night by the developer, Oddo Development, included many of those changes.

The proposed project would sit on more than 116 acres of land just south of 133rd Street and west of State Line Road.

Here are some details about the latest iteration of the Cameron’s Court plan and the changes made from the previous plan:

Additionally, all 32 units within the 16 duplex buildings can be purchased in order to comply with the city’s request for the development to have more living spaces up for sale.

While these changes were made in order to appease the concerns raised by both city officials and residents, many of the more than 30 residents who spoke at Monday’s meeting remained unhappy with the proposed development.

“We acknowledge there’s been changes, but we are relaying the concerns we still have that really haven’t changed through this whole process,” said William Johansen, vice president of the Wilshire Place Homeowners Association, which represents a subdivision just north of the proposed development.

Johansen, along with many other residents, was predominantly concerned with the possible increase in traffic in the area caused by the new development.

Jeff Wilke, a traffic engineer with TranSystems hired by the developer, said a traffic study was conducted and found there would be no significant impact to the area with the addition of Cameron’s Court.

However, Johansen and others disagreed with that statement.

“We still have concerns about the traffic study,” Johansen said. “I’ll give you a really specific example: the traffic study does not indicate that a single person will originate a trip in the development and go to Wilshire Place or vice versa. There’s issues like that in the study.”

After six hours of testimony and discussion, the council ultimately voted to continue the discussion of Cameron’s Court for what they vowed would be the final time.

Many on the council agreed that with each new rendition of the plan presented to them the development becomes better, but they said they would like to see more cooperation happen between the developers, residents and the city before casting a final vote on the project.

“I think it would be helpful if the city staff would come up with a set of planning assumptions which the developer and the city agrees to, such as is traffic going to be a problem on 133rd Street?” Councilmember Chuck Sipple said.

Councilmember Julie Cain said she would like the developer to meet with the surrounding homeowners associations one final time to work out any concerns the neighbors still have with the new development.

Cameron’s Court will be presented before council again at the city council’s Jan. 3 meeting.