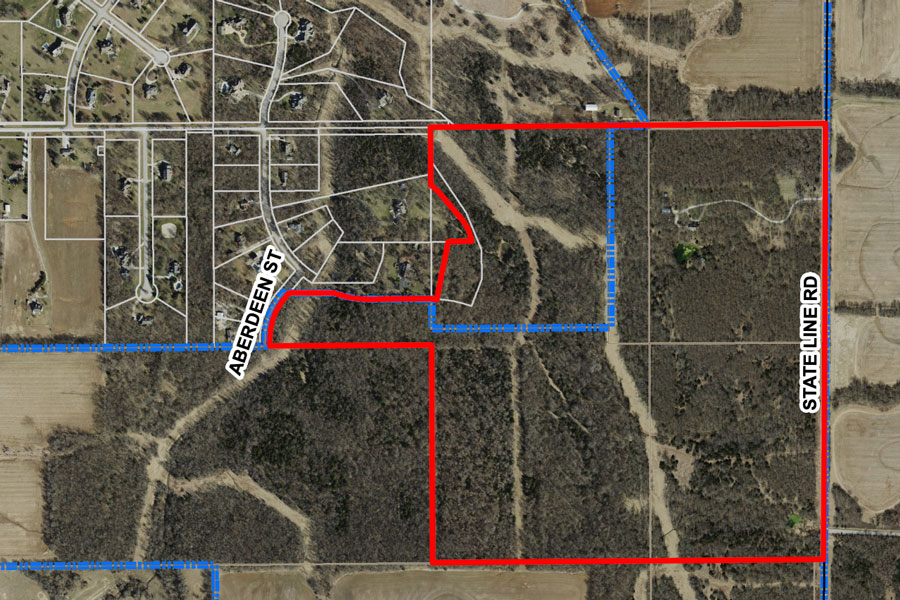 The Overland Park City Council approved a development agreement for a 150-acre residential subdivision just west of State Line Road and south of 183rd Street. The entire acreage of the project is outlined in red in the map above. Image via Overland Park city documents.

At its first meeting this week with a newly sworn-in mayor and councilmembers, the Overland Park City Council approved rezoning for a tract of land in the southeast corner of the city to make way for a proposed residential development.

The prospective subdivision will consist of single-family homes near the southwest corner of 183rd Street and State Line Road.

The approved rezoning request puts another 150 acres toward the residential estates district, with one to five units per acre.

Earlier this year, 28 acres of the property — comprising roughly a quarter of the entire proposed development — was annexed into the city.

Applicant Sundance, LLC’s request went before the Overland Park Planning Commission in November, at which a number of resident concerns came up regarding the development’s impact on the area’s density and traffic, as well as worries over whether the property’s zoning would be compatible with the surrounding area, which is much more rural than other parts of Overland Park.

Harold Phelps, a representative for Sundance, LLC, said the new subdivision would serve as an additional component with slightly different zoning.

“This property is, in a sense, an extension of the existing development property of which they own, because they’re contiguous,” he said. “But it would be a different design.”

New Councilmember Jeff Cox, whose Ward 6 seat covers the newly annexed land, pointed out that while this residential property will be new, there are already a lot of homes in that area that occupy a similar lot size or smaller.

“This isn’t like we’re just taking raw pasture land area out there and turning into a subdivision,” Cox said. “It’s already a subdivision, and we’re expanding that to the west and south.”

This area is also home to the Blue River Headwaters, a preservation area of various plants and wildlife.

Councilmember Logan Heley asked that efforts be made to keep that intact throughout the development project.

“I’d appreciate as you move along in this process of platting and coming back with the plan, to have a conversation with Heartland Conservation Alliance to ensure that we’re doing the best we can with the natural environment down there,” Heley said, referring to a nonprofit that works to preserve lands and promote conservation in the Kansas City region.

The new zoning plans will go back before the Overland Park Planning Commission at its meeting next meeting.