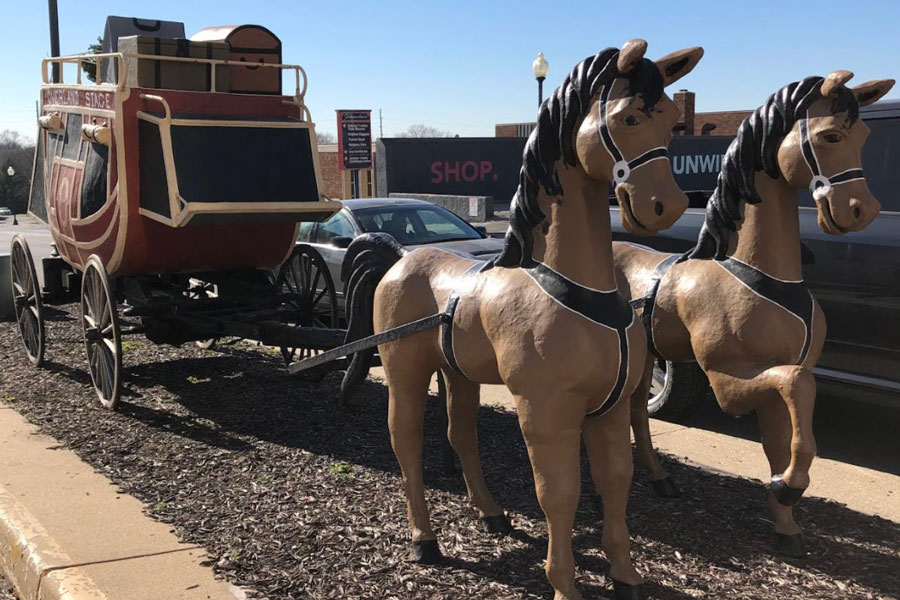 The fiberglass and wood sculpture known as the "Overland Stage" was removed from the corner of the UMB Bank lot in Overland Park earlier this year to make way for a major renovation of the bank's property. The sculpture has now been donated to the city of Independence, Mo., which has begun installing it near the city's historic square. Above, the sculpture standing in Independence. Two of its four horses are being repaired due to corrosion. Photo credit Roxie Hammill.

The horse-drawn stagecoach sculpture perched at the corner of 80th Street and Metcalf Avenue in Overland Park was always an odd fit.

At the edge of the UMB Bank property with cars charging by, no sign ever explained its purpose. But it stood there for fifty years. Now, it’s gone.

At least it’s gone from Overland Park. But it’s not gone from the Kansas City area, as it turns out.

Anyone who wants to go visit and see the “Overland Stage” resurrected in its new home can drive roughly 25 miles to Independence, Mo., where the statue now stands just off the historic town square.

Within close range of the origin point of the three major wagon trails and not far from where wagon builders and merchants outfitted westward travelers nearly two centuries ago, the stagecoach statue may have finally found a location more fitting for what it aims to represent.

The “Overland Stage” statue was originally installed at corner of 80th and Metcalf in 1971 and was part of UMB Bank’s efforts to display artwork at its branches, said Jeff Rogers, executive director of the Independence Square Association.

The brown horses in black-and-white trimmed harness appear to be standing at attention.

Behind them is a rust colored stage trimmed in gold, emblazoned with the words “Overland Stage.” The whole thing is about twenty feet long and eight feet wide, made from fiberglass and wood.

The artist’s name has been lost to time. There’s no signature and bank officials say they don’t have it on record.

“It reminds me a lot of western artwork of the ‘40s and ‘50s,” Rogers said, describing the horses as “very stylized.”

Earlier this year, members of the Independence Square Association heard through the grapevine that UMB was removing the stage in order to redevelop the bank lot.

As coincidence would have it, the association has been in the process of adding art around Independence Square and took custody of the piece as a donation.

The relocation to Independence is especially apt because of the city’s history, Rogers said.

Three westward trails – the Oregon, Santa Fe and California – ran through the city. Travelers from the east typically would have stopped in Independence to have wagons made and outfitted for the journey west. There were several major wagon makers in town.

The city still celebrates that history with its yearly SantaCaliGon Days festival on the square each Labor Day weekend.

Rogers said the stage sculpture’s new location is about three blocks away from where Hiram Young, a freed slave and blacksmith, had his shop, and only a half block from another large blacksmith’s.

In fact, Rogers said the association plans to put some historical flyers recounting the history of Young on an electrical box near the “Overland Stage” sculpture’s new placement as part of its presentation.

According to the California Department of Parks and Recreation, the Butterfield Overland Stage Line was a historical cross-country mail carrier that ran between St. Louis and San Francisco in the 1850s and 1860s.

The stagecoach sculpture is now at 110 Liberty Street, about a half block from Independence Square itself, next to a concrete building façade and parking garage, with parallel parking spaces hard by it on the curb.

The piece isn’t yet completely installed. Only two of the original four horses are currently hitched to the stage because of some corrosion with the ironwork that connected to them and some finishing touches need to be done to luggage atop the coach.

Even so, Rogers said he’s already seen lots of people stop by and take pictures. 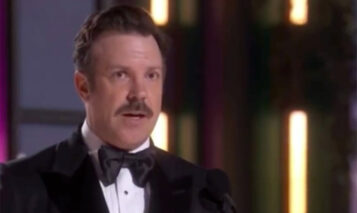 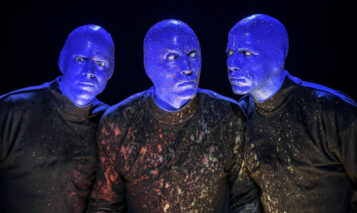 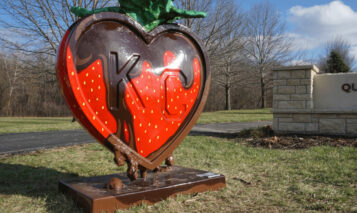 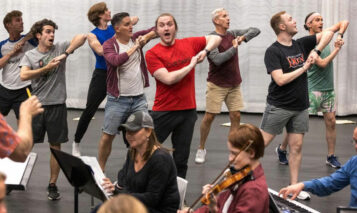 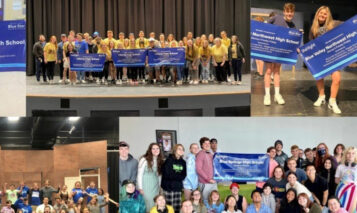