Johnson County Board of Commissioners officially opened the new Johnson County Square in downtown Olathe Thursday afternoon. Features in the new space include a large open field, a wide curved sidewalk with tables and this newly planted tree grove on the north end of the square. Photo credits Nikki Lansford.

After months of work, members of the Johnson County Board of Commissioners and other local officials formally opened the new Johnson County Square with a ribbon cutting ceremony Thursday afternoon.

The outdoor public space sits at the corner of Santa Fe and Cherry Streets in downtown Olathe, on the grounds of the old Johnson County Courthouse, which was demolished earlier this year.

The newly christened square runs a block between the county administration building to the south and the new courthouse to the north across Santa Fe that opened in January.

“The Johnson County Square is now the link the between the red brick of traditional downtown Olathe and the beautiful brand new county building,” said Carisa McMullen, principal at Landwork Studio, an architecture firm that helped design the square.

Being a large outdoor area, the new square will be used as a space for the community to gather for events or just a place to meet on a nice day, officials said.

Johnson County officials said they foresee people using the site as a place to take wedding or family photos.

A wide, curved sidewalk with built-in tables now runs along the north side of the square, creating a direct path from the street to Olathe City Hall.

More than just a sidewalk, the large path is planned to be used for tents during annual Johnson County Old Settlers events and a place to put public art on display.

A new tree grove has also been incorporated into the square. With a total of 33 trees, a mixture of linden wood and maple trees now line the north corner of the square.

All of the trees were donated by different rotary clubs in the Johnson County area.

As part of the plan, the fountain outside of the county administration building remained in place and will stay a key feature to see when walking around the Johnson County Square, officials say. 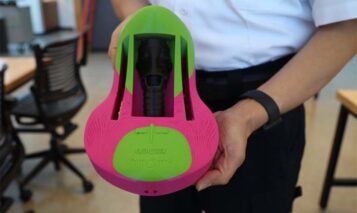