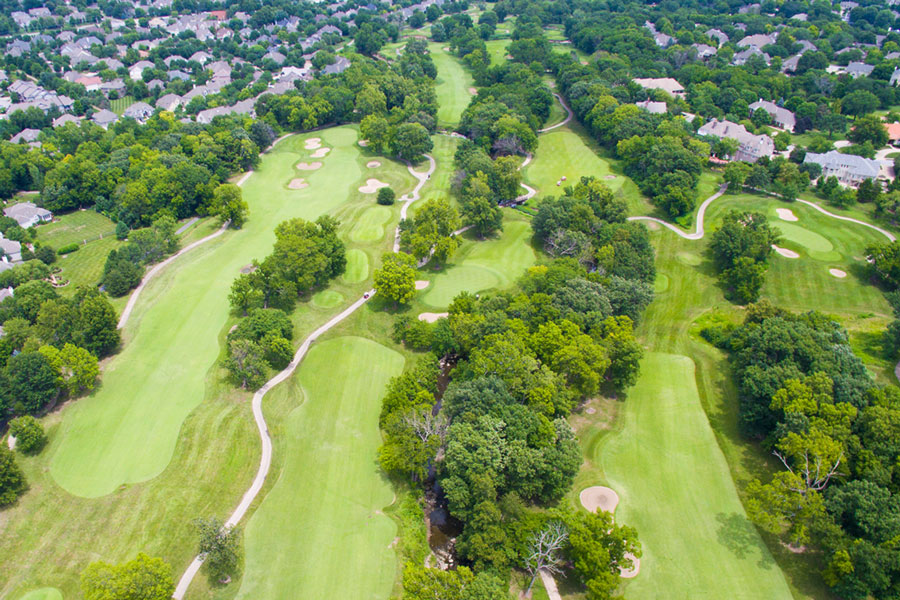 The Overland Park Planning Commission went back and forth at its meeting Monday about a possible new high-end apartment complex near Deer Creek Golf Club but ultimately didn’t make any final decision on the project.

The vision for the residential development includes 224 apartments in three different buildings, spread across roughly 11 acres of land at the northeast corner of 133rd Street and Metcalf Avenue, directly to the southwest of the golf club.

Given that the proposal includes lands currently part of the golf course, the project would also involve paying for various golf course improvements, including bank channel work to fix erosion issues and fixing or replacing the course’s golf cart bridge.

Project applicant representative Bob Johnson told the commission that rezoning for the residential development would utilize 2.5% of the golf course’s total acreage.

He said the stream bank stabilization repairs and the multi-family aspect of the redevelopment are interlinked.

“Once we do this multi-family improvement along with the stream bank stabilization repairs, the golf course will be invested in as well to bring it back to its former glory, which it deserves,” he said.

Residents for and against

Several residents who live near the proposed rezoning area showed up to contest the plan, arguing that it would be too large and would violate the city’s zoning regulations.

“(I was) trying to find something that was similar in size and scale to just one of these buildings, and Arrowhead Stadium came to mind,“ said resident John Chrem. “This is a 500-foot wall of building that’s going to be in our backyards.”

Resident Max Reinig recalled the commission’s unanimous decision in October to deny the request for extra height on the proposed LUX Senior Living apartment complex at 137th and Quivira and said that proposal was “nearly identical” to this one.

He said the two projects were “similarly massive” but that Deer Creek developers were requesting even greater variance.

“I suggest you use this very same type of thought process in making that decision,” Reinig said. “When you take into account the elevation of the land and the height of the buildings, these tall buildings are even more monstrous when you consider the length of the buildings and the distance from the homes.”

Some residents spoke in favor of the complex, arguing that it would be a good source of tax revenue for the area.

“I just don’t understand why anyone with an opportunity to preserve this golf course would object to the use of 10 acres of ground to development completely consistent with the rest of our community,“ said resident David Simpson. “It’s a feature in our county. If you lose this golf course, you’ve lost green space and recreational facilities that go way beyond the immediate neighborhood.”

In its own discussion, the commission was relatively split, with some strongly supporting or opposing the project and others not sure how they should vote.

Commissioner Steve Troester voiced support for the project, saying the commission would continue to face these types of decisions as the community continues to grow,

“Overland Park is a changing community,” he said. “We are a popular place to be. People are going to continue to move to our county and our city, and because of that, we have to accept diversity.”

Commissioner George Lund said it didn’t seem right for this project to take up as much room as it would.

“I keep looking at this and I keep thinking this is a huge project that’s being squeezed into a little corner,” he said.

The commission ultimately voted for a continuance to January or February’s meeting, after almost four hours of discussion and voting to extend the meeting three times.