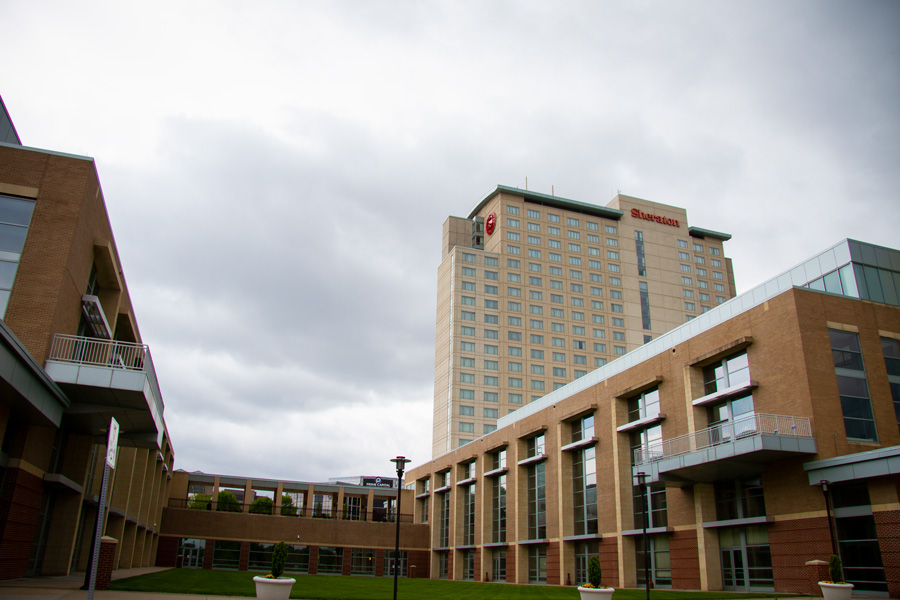 In downgrading the city's credit rating from Aaa to Aa1, bond rating agency Moody's cited that loss of tax revenue from the city's convention center and connected Overland Park Sheraton Hotel, above, and analysts' worries that the city will have to dip into reserves in order to meet shortfalls in coming years. File photo.

The bond rating agency Moody’s has downgraded Overland Park’s credit rating, due to pandemic stresses on the hospitality industry and the city’s convention center hotel.

Triple A is the highest rating on the Moody’s scale, and Aa1 the second highest. General obligation tax bonds are those a city puts its full faith and credit behind, under the knowledge that the bond can be repaid through taxes.

An explanation on the Moody’s website notes that the city has $99.6 million in this type of debt.

Moody’s noted that its revised rating takes into account Overland Park’s affluent tax base, strong past performance and affordable debt and pension obligations.

The downgrade is attributed to management of the Overland Park Development Corporation’s hotel revenue bonds, which are supported by a 9% tax on hotel guests.

The pandemic caused a steep decline in travel and hotel stays in 2020, with a consequent drop of almost 50% in guest tax revenue, according to a city statement emailed to the Post.

But building maintenance costs did not stop for the pandemic. The convention center management has recently had several major upkeep expenses to deal with, including work on the roof, cooling tower and parking lot.

Keeping up with ongoing expenses has resulted in several draws from the development corporation’s debt service reserves.

Although 2021 may prove to be a better year, Moody’s analysts believe Overland Park is still apt to use more reserves for principal and interest payments due in March.

Analysts also called out the city’s apparent unwillingness to intercede and make up revenue shortfalls for the Overland Park Development Corporation, which was created to oversee operations at the Sheraton Overland Park Hotel connected to the convention center.

What the city says

The city’s position is that the development corporation, while a component of the city, is a separate legal entity.

“The (corporation) bonds are legally payable only from a pledge of a portion of the city’s transient guest tax and net hotel operating revenues,” a city statement said.

The negative outlook was given because of uncertainty with the next two years and the anticipated recovery of guest tax revenue.

Bond raters said there is a “strong likelihood” that additional debt service reserve funding may be used in the next two years. If the city can’t meet the payments, the hotel could be foreclosed, resulting in continued credit pressure, according to Moody’s report.

In response to that concern, Overland Park’s statement said: “The city is committed to working with OPDC, the bond trustee and investors in assessing options for strengthening the credit and enhancing the likelihood of repayment of the (corporation’s) debt.