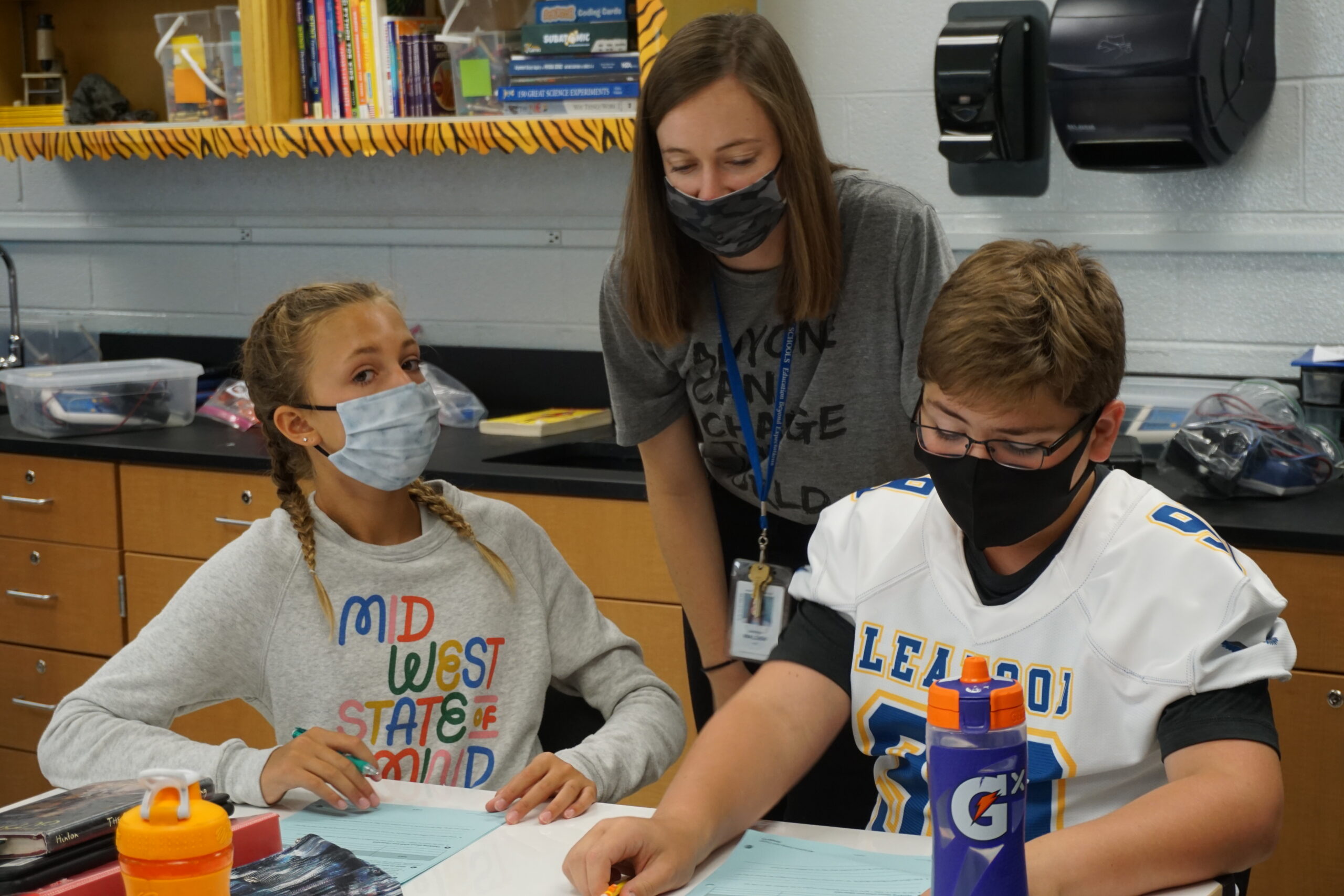 More than 30 current and former elected officials from Johnson County sent a letter to local school districts and the Board of County Commissioners, arguing for masks to once again be required for all students heading into a new semester. Above, students in a classroom last semester at Blue Valley Middle School. File image.

In a letter sent this week, more than 30 current and former elected officials from Johnson County urge the county commission and local school districts to require masks for all students heading into the new semester.

Why it matters: The letter comes as case numbers in Johnson County have reached all-time highs and schools are weighing what mitigation measures to have in place when students return to in-person classes this week.

Who signed the letter: Thirty-three current and former public officials signed on to the letter, which was sent Monday.

They include local mayors, including Curt Skoog of Overland Park, Sollie Flora of Mission and Mike Kelly of Roeland Park, as well as former state senator and U.S. Senate candidate Barbara Bollier.

The case the letter makes: The elected officials’ letter mirrors one sent by more than 200 doctors, also on Monday, urging universal masking in Johnson County schools.

It emphasizes how much more contagious the Omicron variant of COVID-19 is compared to past variants of the disease and also argues that masking has been successful in the past at limiting spread within schools.

The letter also notes that just slightly more than 21% of students age 5-11 in Johnson County are fully vaccinated and that many students in the 12-15 age range received their vaccines more than six months ago and may no longer be at peak immunity.

Quotable: “People don’t live in silos; students in high school often have younger siblings. Not requiring older students to mask at school creates a huge gap in preventing transmission of the virus. Our hospitals and schools are at the breaking point, already facing severe shortages,” the letter says.

What schools are doing: So far, no public school district has reimposed mask rules for older students, though a countywide mask order for elementary students remains in place.

On Monday, the Shawnee Mission school board narrowly voted to maintain its current COVID-19 mitigation plan heading into the new semester, which includes optional masking at middle and high schools.

Blue Valley and USD 232 also made masks optional at high schools last semester and are set to enter the new semester with that same policy in place.

What happens next: The letter sent this week is nearly the mirror opposite of a letter sent to the Board of County Commissioners in December, urging an end to the countywide public health order requiring masks in all schools serving up to and including 7th graders.

That letter prompted discussion of the school mask order at the commission’s final meeting of 2021 in December, and the debate is expected to recommence at the board’s next meeting Thursday, Jan. 6.

The agenda for that meeting has yet to be posted, and it’s unclear if the board will debate ending the mask order outright.

Read the full letter sent this week by 33 current and former elected officials: