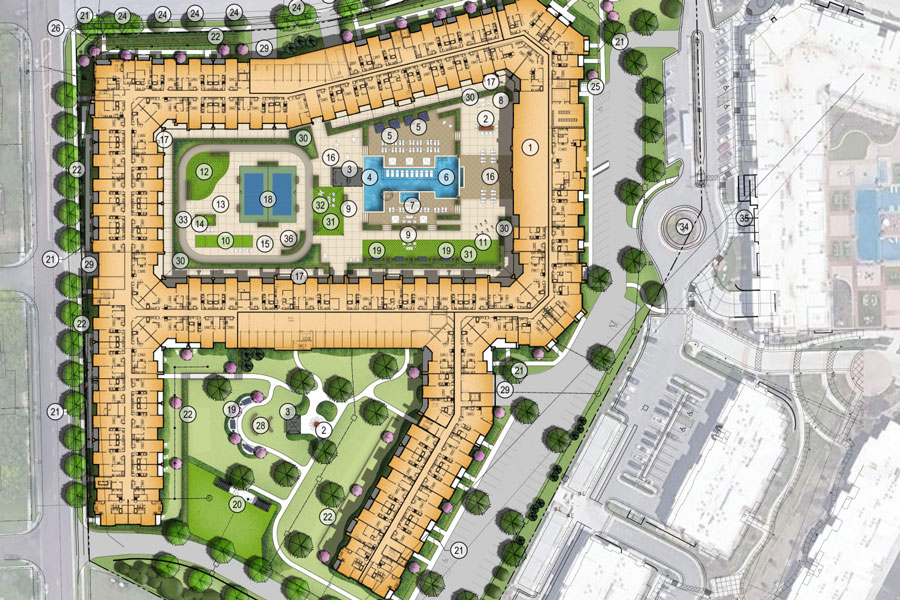 The Overland Park Planning Commission on Monday unanimously approved changes to a plan for new apartments on two parcels of land at the CityPlace development near Nieman Road and College Boulevard. The changes, seen in the rendering above, include a pickleball court, swimming pool and dog park. Image via Overland Park city documents.

Several amenities, including a pickleball court, have been added to the next phase of apartments to be built at the CityPlace development in Overland Park.

The city planning commission Monday approved revisions in plans for two parcels at the southeast corner of Nieman Road and College Boulevard that made substantial changes to parking, allowing for a courtyard of new features.

In addition to a pickleball court, developers also plan for a swimming pool, dog park, bocce court and outdoor walking area to occupy a courtyard surrounded by the building.

CityPlace is a 90-acre mixed-use development of offices and apartments that can be seen from U.S. Highway 69 and Interstate 435. The project, by Kansas City-based Block Real Estate, is already partially built. (A massive fire broke out at the construction site in 2017, damaging dozens of nearby homes.)

An earlier version of the plan for this latest phase of CityPlace approved in 2020 called for the apartment building, which ranges from three to six stories, to wrap around a parking garage.

But changes recommended Monday moved the parking underneath the building, freeing up the courtyard area for the amenities.

The changes make the building larger by about five feet than the current ordinance allows and also reduces the parking from 583 spaces to 512.

A new ordinance is pending that would make the parking allowable and a deviation was recommended on the building footprint size.