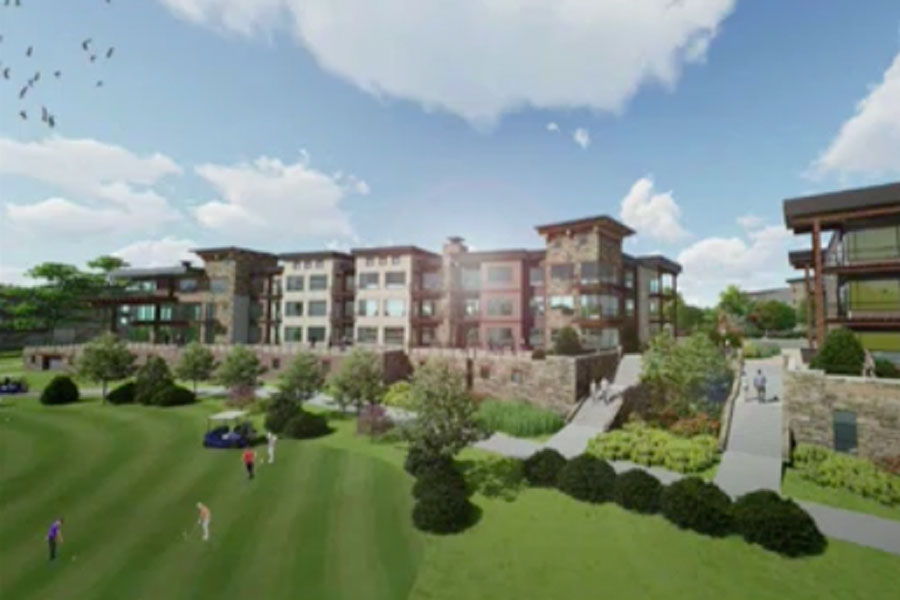 After revisions to the original site plan, the Overland Park Planning Commission in a 6-4 vote on Monday approved a new apartment complex plan next to Deer Creek Golf Club, off 133rd and Metcalf. Above, a rendering of the proposed apartment complex. Image via screenshot of Zoom presentation by GLDC LLC.

After more discussion Monday and hearing residents opposed to the project, the Overland Park Planning Commission narrowly approved a revised development plan for a high-end apartment complex on the corner of Deer Creek Golf Club.

At Monday’s meeting, the commission approved rezoning that clears the way for a high-rise multi-family development to be built on the northeast corner of 133rd and Metcalf Avenue, immediately adjacent to the southwest corner of the golf club.

The commission also approved the project’s new preliminary development plan to reduce the existing golf course and a 10-year special use permit to allow a sports or recreation facility on site.

The proposed development would abut the golf course’s southwest corner near 133rd and Metcalf.

It includes 220 apartments across approximately 11 acres, along with various amenities such as a clubhouse, a fitness area and a swimming pool.

Plans for this development project originally came before the Planning Commission in December, where they were met with opposition from local residents.

At the time, several people who live near the now-rezoned area voiced strong concerns about the project’s size — primarily, one planned four-story building, known as “Building B” that contains 94 apartment units — and potential visual, traffic and environmental impacts.

The commission at that time opted to defer the proposal for another month.

The updated proposal presented Monday splits “Building B” in two with 45 apartments in each, removing its previous 490-feet facade and adding a 60-feet separation between the two buildings that will serve as a landscaped plaza area.

It calls for a leasing area in clubhouse in what is now “Building B1” and a 7,500-square-foot golf pro shop in “Building B2.” A total of 459 parking stalls are proposed, with 112 designated for the golf course.

Project applicant representative Bob Johnson said the concerns brought up in December were used to shape the revised plan.

“We appreciated the feedback and had the opportunity to sharpen our pencil,” Johnson said. “With all of these changes and plans, it still presents the solution that enables the course owner to invest $5-6 million of stream stabilization improvements that enhance the course with $1-3 million of capital improvements and bring it back up to the championship level that it deserves to be.”

Many residents still opposed the project during the item’s public hearing Monday.

Some had concerns that the new separation of buildings actually makes the complex less visually appealing than before.

Others argued the project developer’s promises to “save Deer Creek Golf” aren’t representative of the project’s real motives, saying the golf course is neglected as is and that there are no guarantees the promised golf course maintenance happens at all.

Resident Joyce Goldstein said that while the burden should not be on the project’s neighbors to provide other options for that property’s development, many residents would prefer the site be occupied by single-family homes instead.

“I don’t believe we should roll the dice and gamble on a project with such big stakes,” she said. “Clearly the primary focus of the golf course is not to save it, but to build this complex. If it does fail … I reiterate what everybody else said: we would much rather have R1 zoning and single-family homes developed on the golf course than to have apartment complexes there.”

Lance Turner, president of the Village at Deer Creek’s homeowner’s association, pointed out that most of the residents who would be impacted by this project are retired or semi-retired and chose to purchase homes in that area for the “upscale peaceful environment”.

He also said there are concerns about whether increased traffic would make the surrounding property less accessible.

In discussion, some members of the commission supported the project while others remained torn.

Vice Chair Kip Strauss said he still had a number of concerns, a large one being the amount of resident opposition against it.

“Obviously, there’s a strong feeling from the neighborhood that this is not a good project, and that’s valid,” Strauss said. “Part of our job is to protect homeownership and perceive whether or not they think this is going to hurt their property value.”

Commission member Thomas Robinett said while there might be no guarantee the golf course will stay open, no other golf courses or businesses in general have long-term guarantees either.

“I do think this is a good project,” he said. “I think it’s got a very good chance to, whether ‘generate’ is the right word, result in the dollars needed to make the necessary erosion control or erosion mitigation improvements that are obviously necessary out there.”

The commission ultimately approved the project on a 6 to 4 vote, following two hours of discussion and public comment.