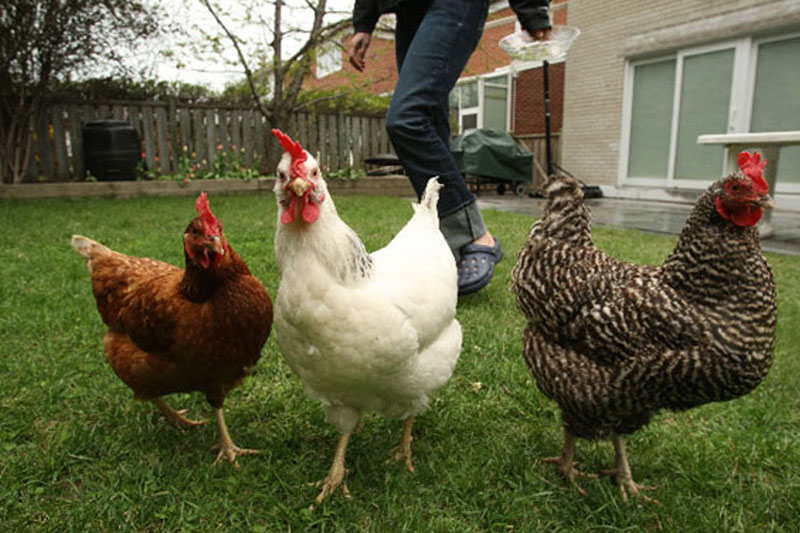 A second city council committee has recommended an ordinance establishing a two-year pilot program that loosens regulations around having residential chicken keeping. Some residents, mainly in the northern part of the city where lots are generally smaller, have been advocating for allowing backyard chickens where there is less acreage. Photo credit Charles LeBlanc. Used under a Creative Commons license.

A new ordinance that would allow backyard chickens on smaller lots is headed for the Overland Park City Council now that a second council committee recommended it Wednesday night.

The proposal, which revamps how the city handles applications for residential chicken keeping, is the product of months of work and negotiation among councilmembers who have previously tended to deny chicken permits in the northern part of the city, where yards are generally smaller.

The new plan is to allow hens, but not roosters, to be kept on lots as small as a quarter acre. Current rules allow chickens by right only if the lot is over three acres.

If approved by the full council, the ordinance calls for a two-year pilot project to gauge any problems.

Applicants would have to get a one-year permit, a planning department review on the lot and inspection by animal control. The new rules also link the number of chickens allowed to lot size and set out rules on setbacks and chicken structures and treatment of the birds.

The new ordinance was proposed to overhaul a chicken permitting process that some councilmembers said was cumbersome for residents and did not address the wishes of people in the northern part of the city, where there’s interest in chickens but lot sizes are smaller.

The existing rules require anyone on a lot less than three acres to apply to the city planning department for a special use permit, then plead the case at a planning commission meeting.

Later, it would go to the city council which more often than not would turn it down.

New rules would take the process out of city planning and move it to animal control, although the chicken site would still be checked for suitability.

Councilmembers at the Public Safety Committee sought assurances that animal control officers were comfortable with chicken inspections and the amount of new work the pilot would entail.

They were told that complaints on chickens that are already allowed were extremely rare.

Councilmember Paul Lyons has voted against chickens on smaller lots in the past and also expressed concerns Wednesday about the pilot project.

He said he disliked that there would no longer be a requirement for notification of neighbors. He also expressed concerns about diseases chickens could carry, particularly salmonella or avian flu.

“Chickens tend to be relatively dirty animals,” even if they appear healthy and clean, he said. “I feel certain there is going to be pushback and complaints that we’re going to see from neighbors as some of these chicken coops show up in these populated areas.”

The committee recommended the pilot project 5-1, with Lyons voting against.