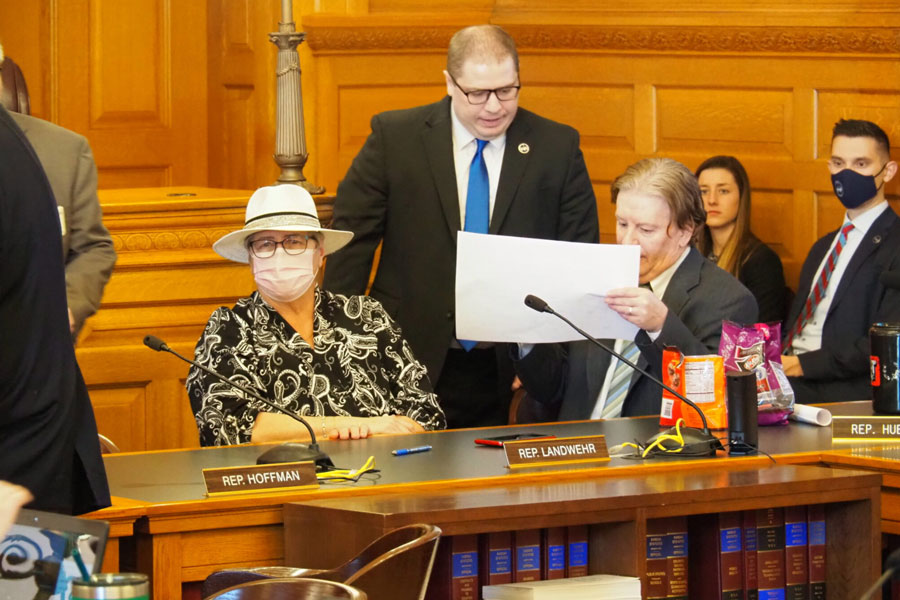 Rep. Steve Hueber, right, reviews a map during a House Redistricting Committee hearing Tuesday. The GOP-dominated House advanced legislation along party lines that would install a GOP-drawn map that splits off part of Wyandotte County from Johnson County in the 3rd District. The chamber is poised to take a final vote on the map Wednesday, potentially sending it to Gov. Laura Kelly's desk. Photo credit Tim Carpenter/Kansas Reflector.

Rep. Steve Huebert during a four-hour House debate Tuesday defended an obvious attempt by Republicans to gain an upper hand in congressional races through redistricting as simply “a political process.”

The Republican from Valley Center was responding to complaints by Democrats about a rushed process that ignored the voices of residents who wanted to keep the Kansas City metro together in a single district, setting the Legislature up for an inevitable court battle over diluting the voting power of Black and Latino voters.

“Gerrymandering, partisan politics, all those different things that are being discussed and talked about right now, are just things that happen,” Huebert said. “They always have and they always will.”

The GOP-dominated House advanced legislation along party lines that would install a GOP-drawn map that removes a majority minority population in Wyandotte County from the 3rd District.

Democrats, Huebert said, are similarly focused on drawing lines that benefit U.S. Rep. Sharice Davids, the Democrat who has served the Kansas City metro area since winning election in 2018.

“Let’s don’t deny the fact,” Huebert said. “That’s just the pot calling the kettle black. Is there hypocrisy in politics? I can tell you that, yes, even I have engaged in hypocrisy in my life. It happens. It’s a part of the process.”

Rep. Cindy Neighbor, D-Shawnee, said Republicans were prepared to “poopoo” the feedback they heard from hundreds of Johnson and Wyandotte county residents who asked to keep their communities united.

Republicans in both the Senate and House introduced the prevailing map, known as Ad Astra 2, a week ago, then hurried through hearings in which nearly every person who testified opposed the map. The Senate passed it on Friday, and the House is expected to take a final vote when it reconvenes Wednesday morning.

“I’ve found the transparency in this process to be about as fake as my eyelashes,” said Rep. Stephanie Clayton, D-Overland Park.

Rep. Chris Croft, an Overland Park Republican who served as chairman of the House Redistricting Committee, insisted the map is a solution that meets all guidelines, based on feedback from listening tours last year.

“This is a math problem with a lot of emotion,” Croft said. “We’ve seen a lot of that on display — and I understand. I believe this map was born out of some hard choices.”

All of the proposed maps have to account for the ongoing population shift from rural to urban areas.

Republicans hope to make it more difficult for Davids to get reelected by replacing Wyandotte County voters north of I-70 with rural populations in Anderson, Franklin and Miami counties, and keeping Johnson County entirely within the 3rd District.

Under the GOP-backed “Ad Astra 2” map, the placement of Wyandotte County voters in the 2nd District would be offset by extracting the stronghold of Lawrence from Douglas County and placing it in the rural, conservative 1st District that stretches hundreds of miles to the Colorado border.

Rep. Barbara Ballard, D-Lawrence, questioned the secrecy behind the map’s origins. Croft has refused to say who exactly drew the new boundaries.

The intentional decision to separate Lawrence from the rest of Douglas County is like separating members of a family, Ballard said.

“You would not want that for your county,” she said. “We don’t want it for ours.”

Democrats repeatedly offered amendments during the four-hour debate that would keep the Kansas City metro area together. All of them were rejected by wide margins that generally fell along party lines.

“What a great session it has been so far,” said Rep. Boog Highberger, D-Lawrence. “First I catch COVID here, and now this. And if I had to choose between the two, I’d stick with COVID, frankly.”

Rep. Dan Osman, D-Overland Park, said the GOP map will cause irreparable harm to every urban district across the state.

“That is, in my opinion, what it is specifically designed to do,” Osman said. “It is also, in my opinion, hopelessly, completely gerrymandered. Now, you can waste hundreds of thousands of taxpayer dollars from Kansans only to be shown that in a couple of months in a court of law, or we can scrap the whole thing today and have a legitimate debate on real maps.”

Rep. Tom Burroughs, D-Kansas City, said the attempt to water down the voting power of an ethnic community as diverse as Wyandotte County is “shameful.” 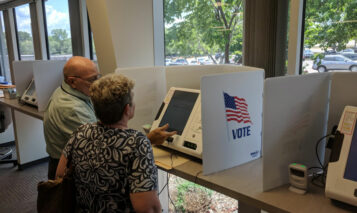 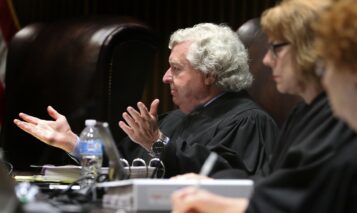 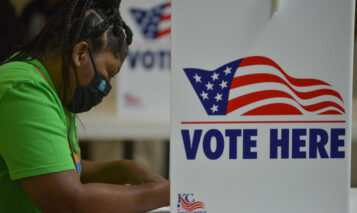 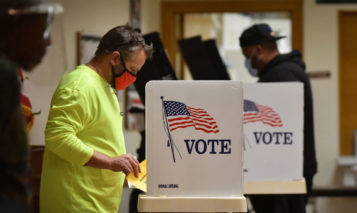 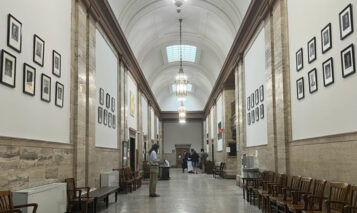