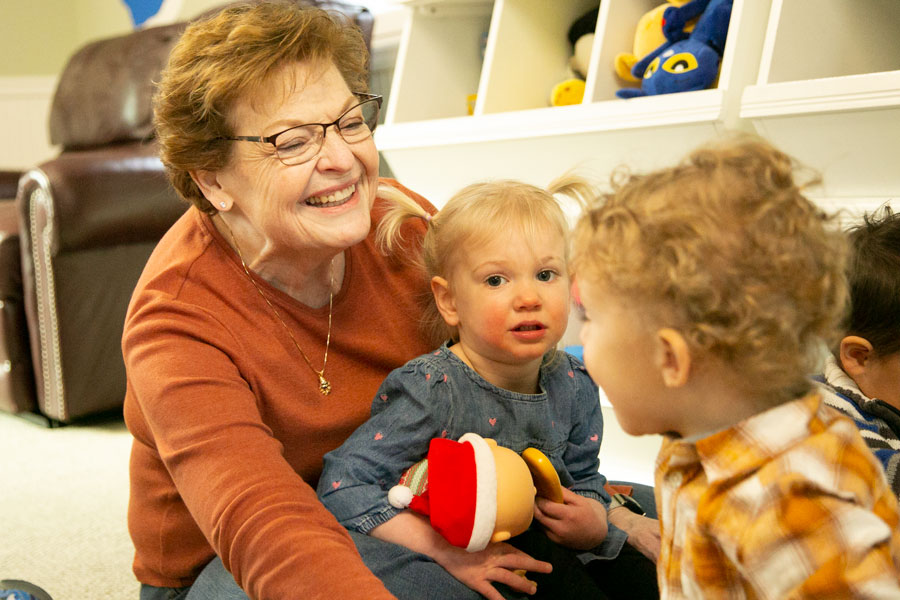 Rosie Grimes, who has run an in-home daycare in the Shawnee Mission area for the past 36 years, is retiring. She estimates she's cared for more than 90 children in the last 36 years, usually in cohorts of 6 or 7 children at a time. Above, Grimes and a couple of children from her final cohort.

Rosie Grimes started an in-home daycare center 36 years ago in order to watch her niece as a way to help her sister, who was recently divorced at the time.

Grimes said when she started she planned to run the daycare for just one year, and there were times in that first year, she recalls, when she thought she may not even make it to that milestone.

But she quickly fell in love with working with children.

She took as many early childhood classes as she could and remained nationally accredited for 14 years — until she couldn’t re-take any more classes, she said.

Now, after three decades, Grimes is retiring to spend more time with her recently retired husband. She told the Post it’s a bittersweet change, but she knows she’ll miss the kids more than anything.

“I love the kids,” Grimes said. “I’ll still see them, I’ll still keep in contact, but it’s not going to be the same.”

A focus on social skills

At most, Grimes says she has cared for six or seven children at a time at the daycare she has run out her home near 87th and Lamar in Overland Park.

Over the years, she estimates about 90 children have grown up there, learning life skills like cooperation and playing together before they graduate and head off to kindergarten.

A majority of her program focuses on social skills, Grimes said. While children learn under her watch, Grimes said, the goal is to instill kindness and respect before the children enter formal schooling.

Additionally, Grimes said she brought in outside programming to help teach children how to follow directions from other adults.

This included music therapy and fitness once a week during the pandemic. Prior to the pandemic, Grimes said, Spanish and yoga were also in the mix.

Grimes also led a childcare providers support group for 15 years and spent time advocating for the profession and children at the state legislature, she said.

‘Part of our family’

Even before Julie Homsey became a mother, her friends kept telling her one thing: When she decided to have children, she needed to send them to Rosie Grimes.

Homsey’s oldest child, 13-year-old Hank, started at Grimes’ daycare when he was about 9 months old, she said.

Now, Homsey said Grimes is an extension of their family — because that’s the environment Grimes created. Grimes loves the children she cares for and becomes like a second mother to them.

“She’s part of our family,” Homsey said. “When you’re working and you have children and you’re entrusting them on a daily basis with someone, it has to be someone you align with and have values that are similar.”

Homsey said even though her children are no longer under Grimes’ care, Grimes still keeps in contact with them. Grimes actively keeps up with the Homsey children and even still has them visit regularly, Homsey said.

While the family is happy for Grimes, Homsey said, it’s also bittersweet knowing that the current children — and any future children —won’t get as much time with Grimes.

Still, Homsey said she knows Grimes dedicated her life to kids, and deserves an enjoyable retirement.

Grimes said she and her husband are planning to spend retirement together doing whatever they choose, including scheduling appointments during the week or taking a multi-week vacation.

“We’re not big travelers, but we’ll spend more time together,” Grimes said. “Do whatever we want whenever we want.”