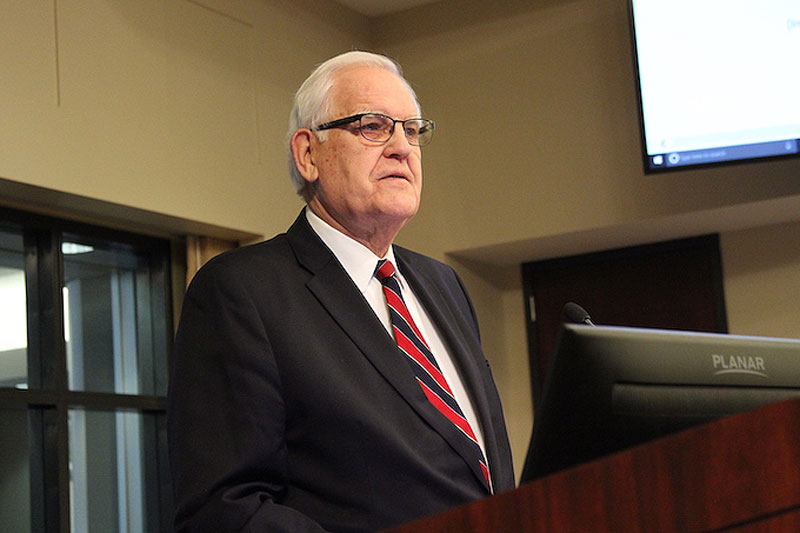 In an email Monday, Ed Eilert, above, announced that he does not plan to seek re-election to a fourth term as Johnson County Commission chairman. Eilert has spent more than 40 years in elected office in Johnson County, including a quarter-century as Overland Park mayor. File image.

Johnson County Commission Chairman Ed Eilert announced today he will not run for another term in this fall’s election.

Eilert, who has served as chairman since 2011, sent an email Monday making his decision public, thanking the county’s volunteers for “all the different ways that make our county a great place to live, work, and raise a family,” as well as county employees and the voters.

Eilert, 82, has been an elected official in Johnson County since 1977, when he began serving on the Overland Park City Council.

He served as that city’s mayor from 1981 through 2005, then was elected to a seat on the county commission.

He was elected chair of the commission in 2010 and has since been re-elected twice.

“After the first meeting in January, 2023, I will miss working with our excellent county staff and their committeeman to quality decision making in government and our elected officials who share that commitment. What they do is important to provide good government for all of us,” Eilert said in his email.

The announcement ended widespread speculation that he would not run again.

So far, four people have filed to run for the spot in this August’s primary.

Former Commissioner Mike Brown initially filed to run for the chairmanship late last year but then withdrew so he could run for Secretary of State.