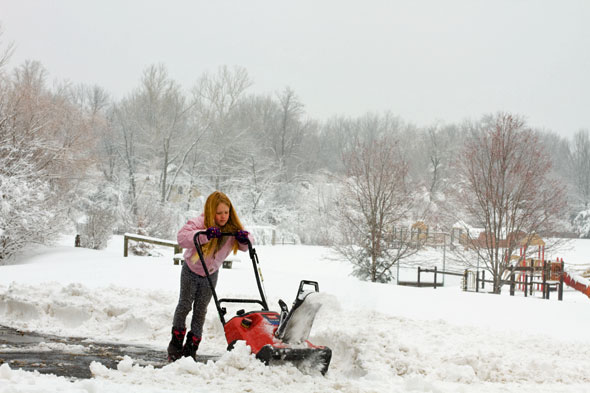 The National Weather Service in Kansas City is now predicting between 6 and 8 inches of snow in much of the metro, including Johnson County. A winter storm warning has been issued, starting Tuesday evening and going through Thursday afternoon a winter storm rolls through parts of eastern Kansas and most of Missouri. Officials warn road conditions will be at their worst on Wednesday and recommend staying off the roads as much as possible. File photo.

Get ready for some major weather whiplash.

Monday went on record as the fifth warmest Jan. 31 in the Kansas City area’s annals with a high of 57 degrees, and temperatures again during the day Tuesday are expected to be well above seasonal averages.

But that will change in a big way starting later Tuesday night.

The National Weather Service’s Kansas City field office has issued a winter storm warning that goes into effect at 9 p.m. Tuesday and will stay in place through Thursday at 6 p.m.

The warning says an “impactful” amount of snow is expected to fall throughout eastern and southeastern Kansas, along with most of the state of Missouri.

Johnson County sits in a band of the region where a total of between 6 and 8 inches is predicted, making traveling difficult. Areas further east in central Missouri are expecting up to a foot of snow.

Rain is expected to begin falling Tuesday afternoon around 4 p.m. and will turn into snow as the temperatures drop Tuesday night.

The worst conditions are expected late Wednesday morning and through the afternoon and evening, and traveling is discouraged during this time.

Officials from the weather service say they are highly concerned about road conditions, especially as people try to make their morning commute Wednesday.

“With the impending winter weather, driving conditions on Wednesday are likely to be hazardous,” officials wrote. “If you must travel, prepare before you go.”

It is recommended to pack an emergency kit in the car with items such as a blanket, jumper cables, shovel and drinking water if you need to drive.

Residents can stay up to date on road conditions by going to kandrive.org.

Drivers are urged to remain off the roads as much as possible Wednesday to allow snowplows time to clear the roads.

While officials say they do not anticipate widespread power outages at this time, they suggest it is something to be prepared for with an at-home emergency kit that has at least 1 gallon water per person, per day and 3 day supply of non-perishable food.