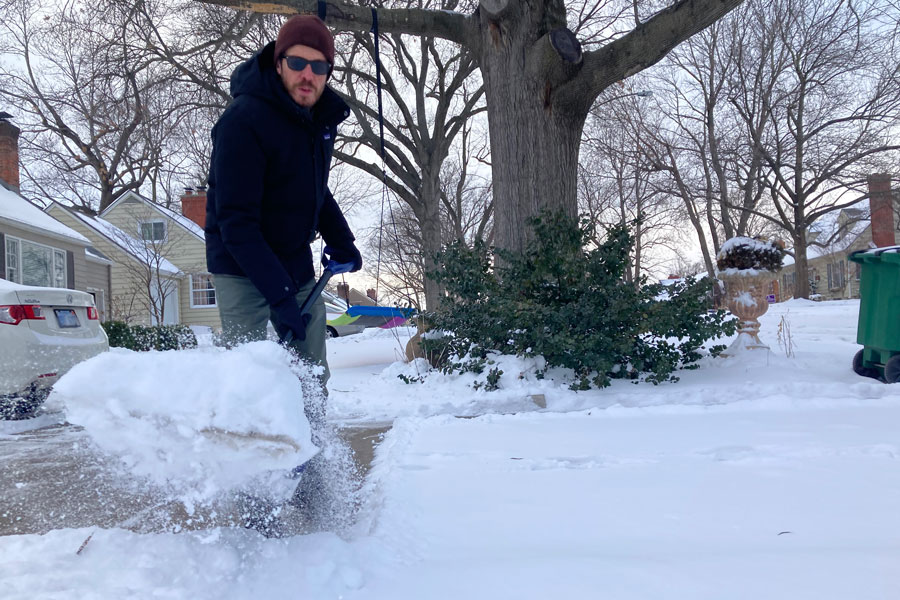 Johnson County received two to four inches of snow during a winter storm Wednesday, according to preliminary data from the National Weather Service. Still, officials warn that road conditions will spotty today and Friday as sub-zero wind chills are expected to keep the streets icy. Above, at the end of a snowy day Wednesday, Jack Golden shovels his driveway in Roeland Park. Photo credit Kyle Palmer.

After days of anticipating a severe winter storm, Johnson County and much of the rest of the Kansas City metro ended up receiving a fraction of the snowfall that was predicted.

Preliminary data shows that a total of two to four inches of snow fell across the entirety of the county Wednesday, said Jared Leighton, a meteorologist at the National Weather Service’s Kansas City field office.

The exact totals for each city are currently unknown as the information is not typically available prior to the 24-hour mark after the snow has stopped falling, he said.

The Shawnee Mission, Blue Valley and USD 232 school districts have all canceled school for a second consecutive day on Thursday, Feb. 3 due, in part, to the still-slick conditions on some side streets and staffing concerns.

Due to inclement weather, side road conditions, and staffing, Thursday, Feb. 3, 2022, will be a Plan B day. This means students will not report to school. The full plan can be viewed here. pic.twitter.com/ZOrtqchIvi

Before snow began falling late Tuesday night, some forecasts said the Kansas City region could get between six to 10 inches of snow.

But the brunt of the storm ended up missing the metro, doing most of its worst damage in central and eastern Missouri.

[12:40 pm] Snow has ended across the KC metro although some localized snow bands are still ongoing SE of the metro. Another round of snow is expected to develop tonight but it looks like this will stay SE of the KC metro. Here is the additional snowfall accumulation forecast. pic.twitter.com/eLYUwhTgK5

Just before 1 p.m. Wednesday, the NWS declared the snow had stopped falling in the metro.

Another round of snow was initially anticipated to develop Wednesday night, but that round stayed mostly southeast of the Kansas City area.

Although Johnson County did not receive as large an amount of snow as originally expected, road conditions still remained a concern throughout Wednesday into Thursday morning.

Residential streets, in particular, continued to be icy and snow packed for a majority of the day, officials said.

During the heaviest portion of the storm in the morning, the Lenexa Police Department tweeted about seeing very few car crashes but emphasized that was due to the majority of residents appearing to stay off the roads.

8:30 AM update. We’ve worked very few crashes so far. Many seem to have heeded advice to stay in, and those that are out are exercising caution. Roads and conditions are not good right now. Thank you!

Only one car crash involving an injury was reported by the Kansas Highway Patrol. It took place in the morning Wednesday and involved four cars traveling north on I-35.

According to the report, a car rear-ended another vehicle on the highway causing the cars to hit a third and fourth vehicle.

One driver was taken to Overland Park Regional hospital with minor injuries.

Though local streets were icy, road conditions were only labeled as severely dangerous well outside of Johnson County’s limits.

Shortly before noon Wednesday, I-70 was closed west of Columbia, Missouri, as accumulation of snow caused numerous crashes along the highway.

Concerns for the rest of the week

The concern for the remainder of the week is no longer snow but extreme cold.

Leighton said sub-zero wind chills are expected both Thursday and Friday mornings. And with the cold temperatures, slick conditions will remain, especially on untreated surfaces.

“It’s impossible to get all of the snow off the roads regardless of how good the plows are, so they’re still definitely going to be a film of ice and snow on most roads in the morning. Until it gets above freezing, it won’t melt off,” he said.

“If you have to go out the remainder of the week, you’re going to want to really bundle up and drive as cautiously as possible,” Leighton said.

Temperatures within the county are expected to rise above freezing by the weekend.