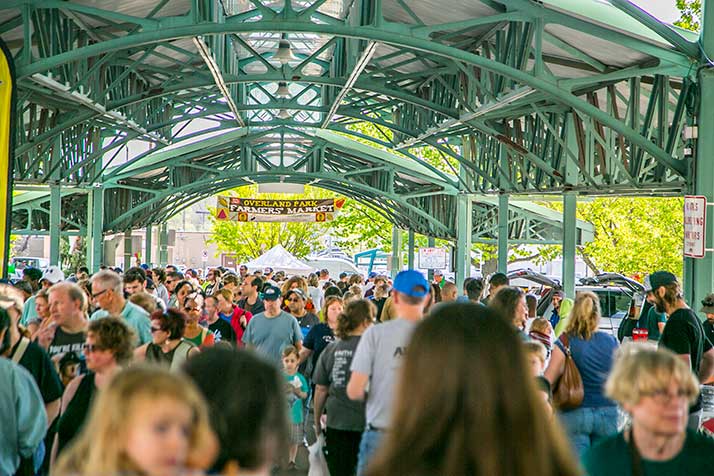 The Overland Park Farmer's Market is set to return to its original pavilion location downtown when it opens on April 16 after two years in the parking lot of the Matt Ross Community Center. The city plans to expand the footprint of the market and make use of nearby parking lots so that there can be more spacing between vendors to accommodate for pandemic public health precautions. File photo.

After two seasons elsewhere, the Overland Park Farmers’ Market will return to its original downtown pavilion location for its 40th season this year, but it will be spread out with more space between stalls, a city council committee learned Wednesday.

Jermel Stevenson, director of the city’s parks and recreation department, said the market will open on Saturday April 16, with Wednesday markets beginning June 1.

He told the council’s Community Development Committee that the market will take place once again at its traditional site at 7950 Marty Street, adjacent to the Clock Tower.

The market was relocated in 2020 and then again last year to accommodate for pandemic public health precautions.

As the coronavirus pandemic began nearly two years ago, the market was a drive-thru event but later became established in the parking lot of the nearby Matt Ross Community Center, where it enjoyed record attendance the past two seasons.

Stevenson said the layout of the 2022 market should be released in a week or so, but noted the footprint will expand, with the city making use of nearby parking lots so that there can be more spacing between vendors.

Some restrooms will be added, he said, noting that there are also restrooms a few blocks away at Thompson Park.

There’s also an option to close parts of Marty Street to vehicles, he said, but no final details have been set for that. He said staff is working to make sure access to downtown stores will not be impeded.

Stevenson added that city officials are working with the downtown merchants to bring back entertainment to the Clock Tower area, though that may not happen at the initial market days.

The committee heard a brief report on plans for the market, but did not discuss progress on getting ideas for a possible redevelopment of the market pavilion area.

The city received four proposals by the October 29, 2021 deadline.

No details on what’s in the proposals were available at Wednesday’s meeting because they are considered sealed until a recommendation is made.

A selection committee is still evaluating them and interviewing applicants, said committee chair Logan Heley. A date for a decision has not been announced.

Redeveloping the pavilion market space is an idea that sprang from a 2017 study on how to make better use of the space as market attendance grows.

After the council decided in 2018 not to relocate the market to a nearby park, members decided to put improvements to the pavilion into a long-range plan.

Councilmembers have said they sought input from developers to maximize the types of improvements that could be made. The original location has a slope that is difficult for those with mobility issues and, except for the pavilion roof, is open to the elements.

The nonprofit Downtown Overland Park Partnership also is working on a plan to redo Overland Park Drive, the narrow street between the Clock Tower and the pavilion, to make it more inviting.