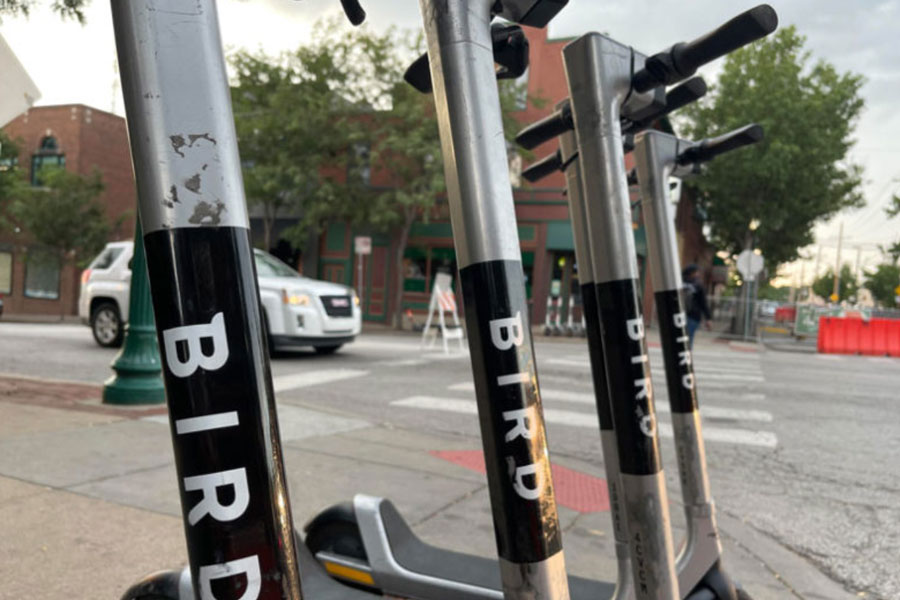 The company Bird will soon begin delivering electric, dockless scooters, like the ones above that you can see being rented out on streets in Kansas City, Missouri. The vehicles could arrive in Overland Park as soon as March to launch a two-year pilot program that will also eventually include electric motorized bicycles. File image.

Those electric scooters that have been a hit in downtown Kansas City in recent years will begin popping up in Overland Park by mid-April and possibly as early as March, if weather allows.

The Overland Park City Council unanimously voted their approval Monday for a two-year pilot program that will allow the scooters and, a little later, motorized bicycles to be available for short-term rentals.

Two vendors, Bird Rides Inc. and Lime, had been in the running for scooter rentals until recently, but Bird won the contract after councilmembers expressed an interest in adding electric bikes to the pilot.

Bird was the only company able to meet that requirement, and would agree to do so only if offered an exclusive partnership, said Brian Shields, city traffic engineer.

However, the competition may be opened back up if the city decides to extend the program after the two years is up.

How the pilot will work

Under the rental program, riders would be charged 25 cents a ride via an app, with Bird collecting the money for the city. Scooters are programmed to shut off once beyond the city’s boundaries, unless the trip is into another participating city, Shields said.

Some rules of the road:

Bird would pay $500 a year to Overland Park. Aside from staff time overseeing the program, the city would not incur costs, according to the staff’s analysis.

Shields said the program is scheduled to begin no later than April 15 with 75 scooters, but if the weather cooperates, they could be rented in Overland Park as early as March 1.

Twenty-five e-bikes are scheduled for July 1. The total fleet of electric ride-share vehicles could reach 400 during the pilot program, which will end Nov. 30, 2023.

City officials have been studying the scooter idea since 2018, after the two vendors approached them about starting a program similar to Kansas City’s.

Councilmember Faris Farassati said he was uncomfortable that without a broader request for proposals those companies will have an advantage later on.

Roxie Hammill is a freelance journalist who frequently publishes stories for the Post and other Kansas City area publications. You can reach her at roxieham@gmail.com.