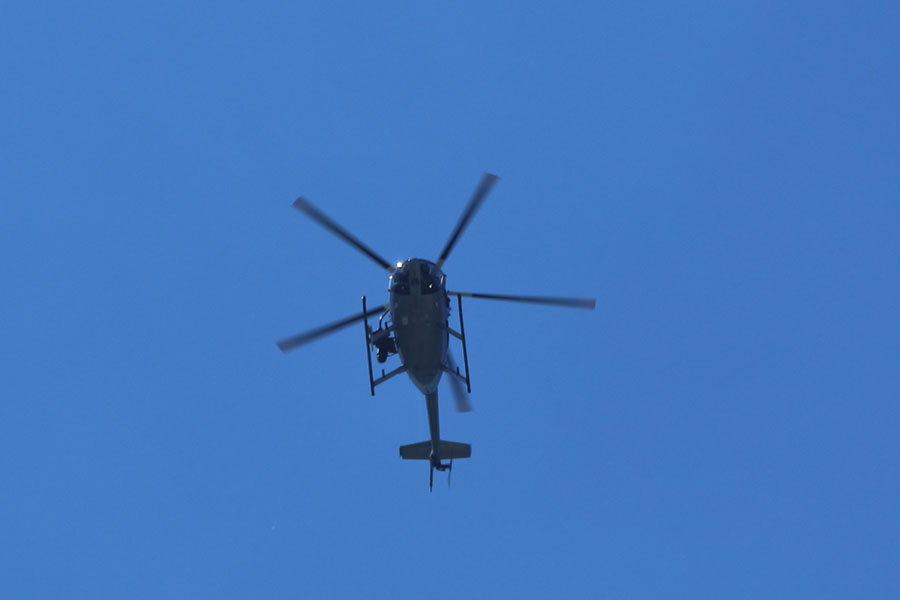 Helicopters with the Kansas City, Missouri Police Department Helicopter Unit have been used in operations over Johnson County in the past, including assisting local and federal agencies with investigations. This picture was taken over Merriam in 2020 as Merriam Police and the ATF were chasing alleged suspects during an investigation. Photo credit Mike Frizzell.

Since Friday, social media and local neighborhood apps have been abuzz with talk of police helicopters circling over Johnson County.

Here is what we know:

Officer Donna Drake with the Kansas City, Missouri Police Department confirmed with the Post via email that KCPD helicopters have been in use over the Johnson County area.

Drake said the department has a mutual aid agreement with other agencies that allows them to use their helicopters over Johnson County.

She said that KCPD does not have “additional details about their investigation” involving these recent helicopter flights, and she did not indicate which agencies needed the helicopters’ assistance.

The Prairie Village Police Department has not had any calls or operations using helicopters, Chief Byron Roberson told the Post via email. Roberson said he believes the helicopters being heard belong to KCPD.

The Roeland Park Police Department is “not involved with a helicopter” and has not requested one, Chief John Morris told the Post via email. Morris said he’s been told the helicopter operations are related to a “special investigation assignment.”

Morris said helicopters are usually used to track stolen cars or persons “who may be on the move,” but that he did not have any further information.

Larry Peet, deputy director of Johnson County Airport Commission, said the helicopter operations are not in either of JCAC’s airport’s airspace, “so neither one of [JCAC’s] towers have been in contact with them.”

How flights are tracked

Aircraft tracking apps, like FlightRadar24 and FlightAware, use technology known as ADS-B and Mode-S to be able to show the positions and basic information about hundreds of thousands of flights each day worldwide.

ADS-B, or Automatic Dependent Surveillance-Broadcast, uses data broadcast by the aircraft to share identification, position, altitude and speed. Mode-S provides similar data with some additional information about the speed and altitude of aircraft.

Both of these aircraft-generated streams of information provide air-traffic controllers and flight tracking apps with real-time information on any aircraft broadcasting the information.

One helicopter would be over Johnson County for about 90 minutes. It would then swap positions with the other helicopter to return to the Helicopter Unit hangar, near the Truman Sports Complex, for refueling.

Some flight tracks over the weekend showed nearly constant orbiting over the same area, while at other times, the flight path appeared much more random.

One helicopter circled over the area of Shawnee Mission Parkway and Metcalf Avenue for more than an hour on Friday evening.

There has been more activity in the skies over Johnson County since Friday.

After 10 p.m. Saturday, one helicopter made large circles from near State Line Road, west to Interstate 35 along 75th Street, with return trips back east over Shawnee Mission Parkway.

These circles went on for nearly 90 minutes, with a brief detour north into Kansas City, Kansas, and the area of Interstate 635 and the Kansas River.

Then, flights from around 10:30 p.m. Monday show a helicopter making a beeline from its hangar in Kansas City, Missouri, to the area of I-35 and I-435 in Lenexa, then heading southeast to near 159th Street and Mission Road in Overland Park, before returning to circle in over Johnson Drive in Mission.

Most of the flights have begun in the early evening continued into the early morning hours of the next day.

The last flight documented by the flight-tracking apps shows to have returned to Kansas City, Missouri at about 11:55 p.m. Monday.