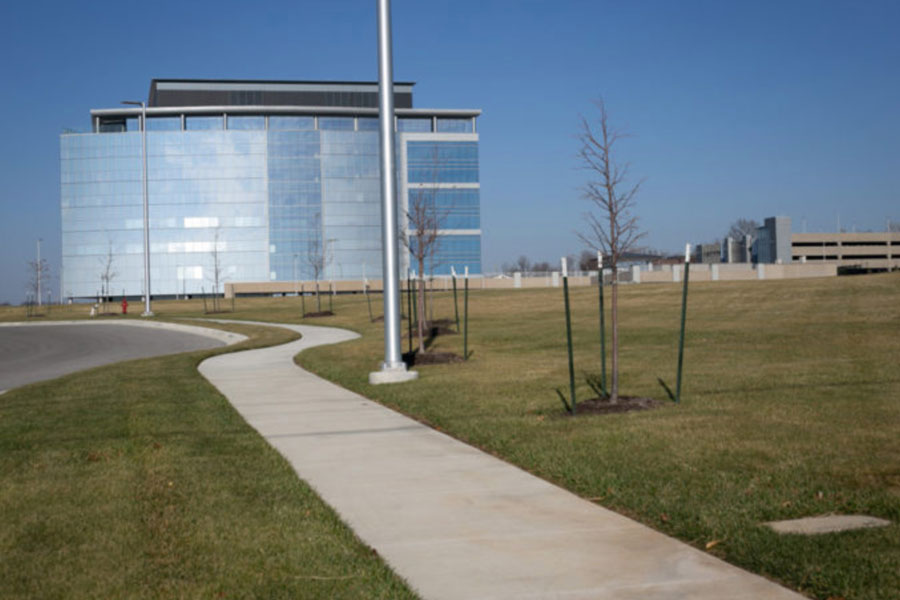 The Overland Park Planning Commission on Monday unanimously approved the next phase of work on Shamrock Trading Corp's new headquarters near 93rd and Metcalf. But one commissioner expressed concerns over the fact that the plan calls for 2,000 more parking spaces than the city requires. Above, the current new Shamrock building at 93rd and Metcalf, looking north. A parking garage to the right would be expanded by one level under the next phase's plan. File image.

The second phase of the Shamrock Trading Corp’s prominent new headquarters on Metcalf Avenue got the initial okay from the Overland Park Planning Commission Monday, despite concerns about the new layout and what one commissioner called “excessive” parking.

Revisions in the Shamrock project’s preliminary plan got unanimous approval from the commission on Monday, as did some changes in plans for the former Sears building at 97th Street and Metcalf nearby.

The construction in the works for Shamrock would have 27,720 fewer square feet of office space but 647 more parking spaces than the original plan.

That would bring the total number of parking spaces at the site to 2,000 more than the city currently requires. However, most of those spaces are in parking garages rather than surface parking.

Concerns over amount of parking

“I am seriously concerned about the excessive parking and I hope that in further development of this property there’s consideration taken to finding a better way to accommodate employees who use something besides automobiles,” said Thacker, who nevertheless voted to move the plan ahead.

Shamrock’s new proposal also would eliminate a proposed restaurant space at the corner of 93rd Street and Metcalf and replace it with surface parking.

It also would increase the height of part of the parking garage on the northeastern corner of the site nearest 93rd and Glenwood by about twelve feet, making it five levels rather than four.

Future projects may not require as much parking as in the past because of a new policy in the works that reduces the amount of parking required per square foot.

However, it was not immediately clear how or if the new policy would affect the Shamrock project. Usually the issue in redevelopment projects is finding enough parking, said Commissioner Rob Krewson.

Thacker also expressed concerns about changes to the layout of green space close to the buildings and the increased height of the parking garage on Glenwood Street, which is opposite some two-story apartments.

She suggested the developer enhance the landscaping to screen the taller building.

Kevin Lee, an attorney representing Shamrock, said the parking is not “excessive” but is a function of the timing of the phases.

“We feel this is the right amount of parking for what we’re constructing here,” he said.

Monday was not the first time a city official expressed mixed feelings about the development atop the hill that was the former site of the French Market.

Councilmembers who approved the tax incentive package in 2019 noted the office tower project was not their dream for the space, but it was better than letting the site stay vacant, as it had for about 15 years.

Melissa Cheatham, now a councilmember in Ward 2, spoke at that meeting of her disappointment that the office buildings didn’t fit the Vision Metcalf ideal of a mix of uses that de-emphasize automobiles.

Meanwhile, the changes to the former Sears site a few blocks away on the southeast corner of 97th Street and Metcalf involve a smaller increase in parking and square footage.