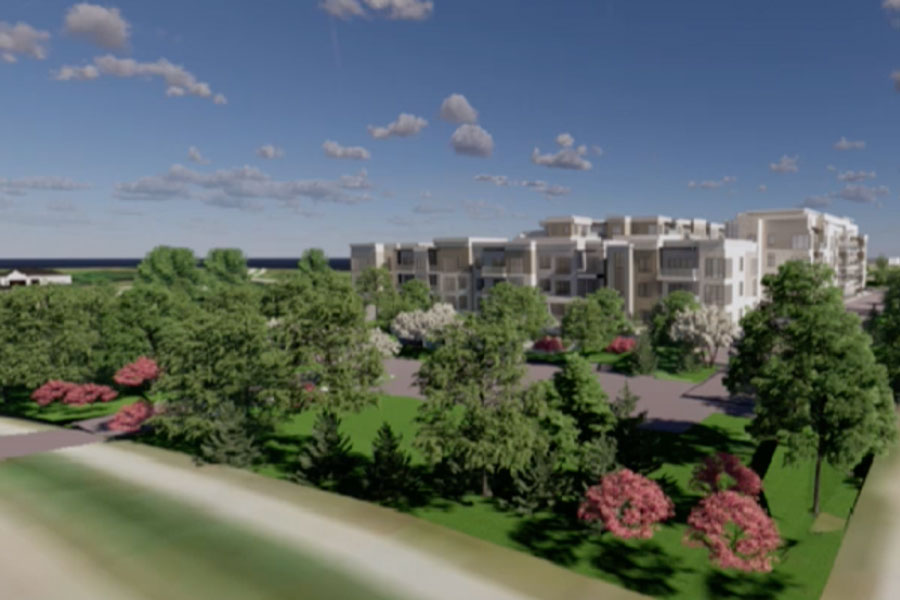 The apartment complex would include buildings with three, four and five stories. The development has a total of 228 apartment units and 360 parking spaces included in the proposal.

It also includes amenities such as a pool, dog park, putting green and outdoor seating areas.

After being continued from a meeting in September, the development came before the commission for review in October.

Residents who live near the proposed property voiced concerns at the time about the potential for more traffic at the site, the large size of the property and its aesthetic impacts on the neighborhood.

At that time, the commission denied the developer’s request for rezoning that would have allowed for a building up to six stories tall.

Some of these included a reduction from 236 units to 228 and lowering the height of the buildings and reducing the property’s amount of asphalt coverage.

The developer also added landscaping to the property’s parking garage to shield it from the view of nearby residents.

Kevin Berman, a project architect with the Hoefer Welker development team, said the primary concerns from those meetings continued to be the proposed development’s height and overall character.

“Our goal as a developer for the site was to create a luxury modern, beautiful, amenity-rich apartment building for the 55 and older community,” Berman said. “We were asked to go back to the drawing board, literally, and that’s what we’ve been doing for the last month- trying to keep on our goals but also respect the neighbors.”

Some residents at the meeting voiced lingering concerns about the development Monday.

Resident Gerald Hiller told the commission he had attended the development team’s neighborhood meetings about the project. He said that although “tremendous progress” came out of those meetings, he still saw the property’s large size as a drawback.

“The building lengths and heights are out of character with the area and the building aesthetics are still not in harmony with (the neighborhood),” Hiller said.

Resident Autumn Wolf spoke in favor of the project and the population it would serve.

She explained that there haven’t been many locally accessible options for her mother, who currently lives in a senior living community.

“I do like to live close to her and check on her about three times a week,” she said. “So we are excited for the proposed project. I think that we need other options for 55 and older people that want to live close to their children.”

In discussion, the commission largely agreed that the project had improved since its presentation last fall.

“I think it’s a nice looking project and I appreciate the design changes,” he said.

Commissioner Edward Reitzes admitted he initially didn’t think the changes were significant enough, and he sympathized with nearby residents who still had traffic and size concerns.

But overall, he said he thought the development had done a good job at “softening” the proposed property.

“To me, it’s a question of balance here,” he said. “And these are always tough tests. But I think perhaps the applicant has made enough changes here to soften the mass of the buildings.”

The commission unanimously approved the project. It will go to the Overland Park City Council on March 7 with recommendation for approval.