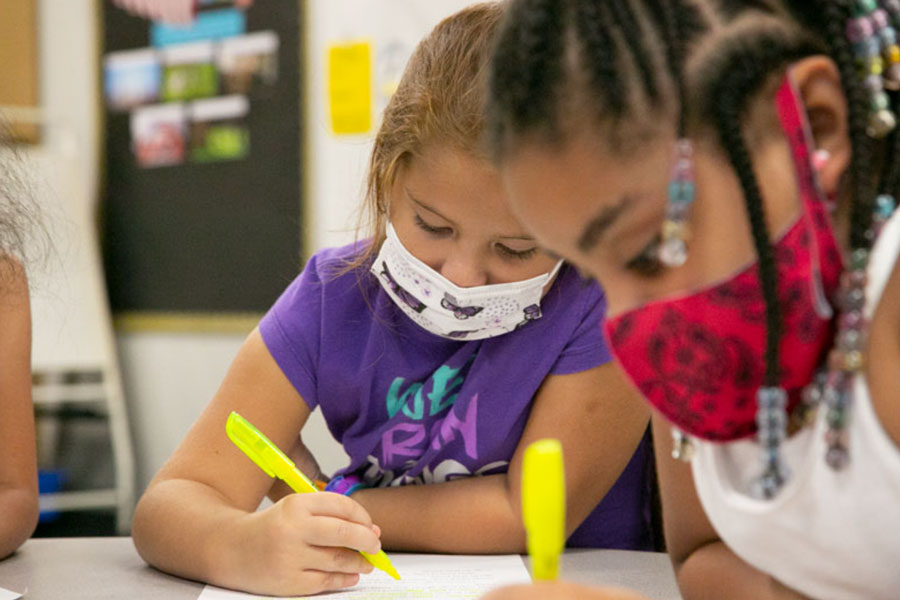 The Johnson County Board of County Commissioners on Thursday voted 6-1 to lift a countywide public health order requiring masks in schools that serve students up to and including 6th grade. Many local school district are anticipated to lift their masking rules for younger students now that the county order has been lifted. File image.

A countywide rule requiring face masks for elementary school children through sixth grade was lifted today by the Johnson County Commission amidst a background of steadily dropping number of coronavirus cases.

Commissioners on Thursday morning voted 6-1 to drop the mandate, which was originally enacted last August and was set to expire May 31.

Commissioner Becky Fast, who spoke of her concerns about protecting medically vulnerable children, was the lone “no” vote.

The action does not change mitigation rules still in place among four school districts, including Shawnee Mission, Blue Valley and USD 232 in De Soto, that trigger a return to masks when student absenteeism rates become high enough.

But with cases ebbing, several school districts had already dropped requirements for masks in high schools, junior highs and middle schools, and were expected to do the same for elementary schools once the county ended its health order.

‘Does not mean the pandemic is over’

COVID-19 cases have dropped precipitously since the January high of about 2,400 per 100,000 residents.

“I still believe in intervention, I still believe in mitigation,” said Commissioner Jeff Meyers in explaining his vote in favor of lifting the order. “I do believe that the mask mandate time is able to come to an end.”

“This situation today does not mean the pandemic is over,” she said, as she urged people to continue to be considerate of others.

“There’s no mandate that can make people do the kind and compassionate and right thing. But I hope people will look into their own hearts and make those decisions so that all of our kids can feel safe at school, with or without the mask mandate,” she said.

“Our role as a local health department doesn’t change,” he said. “We will continue to work no matter what the policies are.”

Fast, who said she’s received numerous questions from parents of vulnerable children, challenged county health officials to be more specific about what they’re doing to support those parents.

Some schools also have programs for children too young to be vaccinated, she added.

Commissioner Charlotte O’Hara said school districts have had the power all along to put mitigation measures in place and could opt out of public health order.

“Unfortunately this has been a long protracted political dodge ball,” in which school districts used the health order as an excuse to put mask mandates in place. “I’m very glad this game of dodge ball is over,” she said.

Later, O’Hara offered a motion to limit county health department mitigation orders to private child care settings by requiring approval from the county commission. That motion died for lack of a second.

Commissioner Michael Ashcraft expressed a readiness to be through with coronavirus health orders that have sparked heated public debate and occasionally drama during public comment sessions.

“This has been the longest year in my life,” he said. “It’s been rough and I think we’ve all suffered regardless of where you fall out on these issues.” He said he hoped the world is transitioning into “a better normal.”

Public comments at today’s meeting were almost all against the requirement to mask in schools.

Nine people spoke virtually, mostly to re-argue points made in past meetings about the effectiveness of masks, government overreach and concerns about speech development with masks.

Roxie Hammill is a freelance journalist who frequently reports for the Post and other Kansas City area publications.